I’v been playing Memoir '44 for a little while.
I also did a lot of reading on forums.
From what I’ve seen people who don’t like it, mainly complain about cards and dice making it too random.
But I think that just makes it more exciting. And the dice is a good representation on how anything can go better or worse than expected.
Now, I want to know, if we could collect real life examples where the “cards or dice” didn’t go in favour of one side or the other.

I currently have only 2 examples in mind.
The Smoking snakes song from Sabaton. Where 3 soldiers on patrol stood their ground against the germans until the end at Montese.
But another maybe even better example is the lone KV-2 at Raseiniai which was a pain to destory for the germans. The whole story of them trying to get rid of it with everything they can but failing for the entire day and night is a perfect example of the germans rolling badly.

The chance and luck factor in Memoir really appeals to me. While it can be super frustrating, I also really enjoy the opportunity to try to mitigate that luck and still figure out a way to win. It seems the best players are able to that pretty regularly!
Anyone can win with good cards and dice. One can win with bad cards or bad dice (although I’d rather have bad dice then bad cards). One can also win with bad cards and bad dice, but it’s a whole lot harder! But what a sense of accomplishment when you do

A friend of mine describes MM44 as a ‘‘beer and pretzels game’’.
And I think that is very much the way to view it in terms of the luck of the cards and dice. Anything can happen, so just sit back, relax and enjoy whatever the outcome.
I often end up laughing and joking with my opponent about how lucky one or other of us was, and discussing how it could have been so different if that dice roll had been more decisive or if I should have played that card instead of that one.
There are plenty more much more serious board games where you can get more involved in the ‘‘what ifs’’ and ‘‘whys’’.

I don’t see why people dislike the luck element. All multiplayer games have some element of luck because you don’t know what your opponent will do. Similar to poker, you must manage what you have to affect the consequences of that luck. If you have a good hand, it may be worth the risk, if not, it may be worth waiting for a better opportunity. If you removed the dice, for example, the action would have a known consequence. There is no risk element, nothing to lose. The cards also represent the fact that sometimes you cannot have what you want, but sometimes you may find fortune. That’s just like war, in my opinion.

I agree about your last sentence - just like war.

Here are a couple of examples from a scenario I just played.
Make of them what you will, but they were the difference between the Marines winning and losing the game.

Yes! Close Assault - 1 extra die, those Japanese are toast…
…D’oh! Not even a flag! 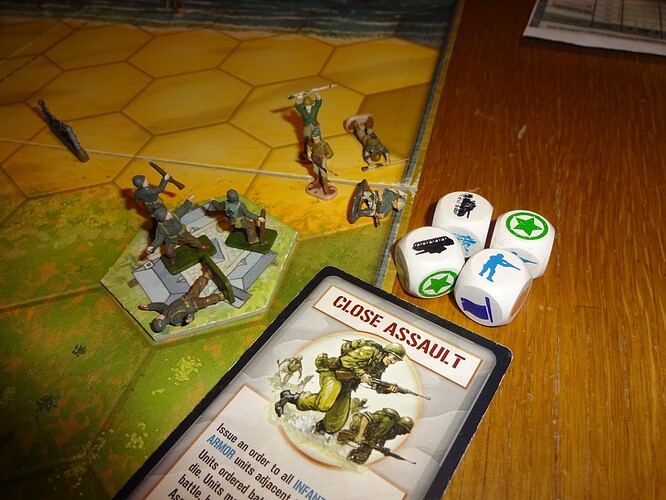 Barrage! That will finish off those 2 remaining Japanese…
…what?! FOUR stars! Who was manning those guns?! 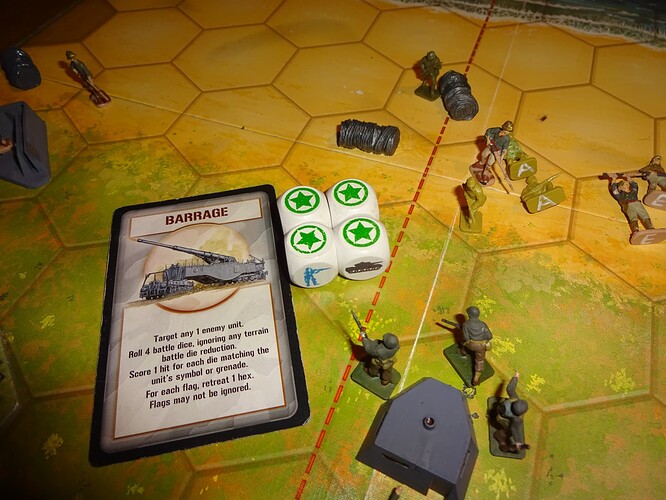 That’s excellent. Indeed, things don’t always go to plan. Officers don’t make decisions on the movement of their men based on undisputable facts, they make informed decisions based on the information they have available to them at the time.
As my next write-up will show (watch this space!), men going into the jungle will not have a perfect knowledge of what they will encounter within. The dice rolls, in my opinion, represent that fog of war, you may have some ideas, but you never really know for sure. Remember too that the minis do not represent four infantrymen, it is a representative of potentially tens of individuals. When the unit is reduced to a single miniature, this could represent a determined group of stubborn warriors that do not want to give in, and thus we roll stars to facilitate that.

I agree with Pragueimp. The very fact that even current military language includes terminology such as:
Friendly Fire
Collateral Damage
Drone Error
is an acknowledgement that all does not always go according to plan.

A couple more examples of bad rolls of the dice, both from 42 Street, a great jdrommel scenario from Crete, which I have just played:

Germans looking to wrap up the game (two more medals to win) by playing Their Finest Hour: 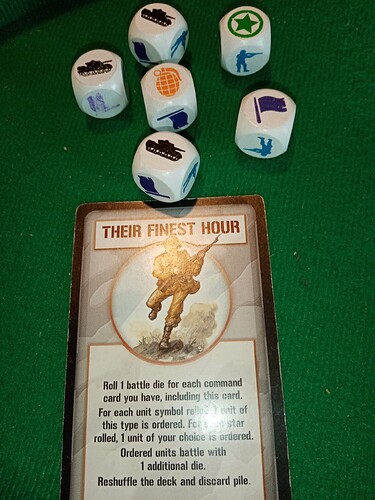 One of the ANZAC units was stubbonly holding out in a town, they were down to 1 figure when they played Medics and Mechanics - would it save the day and bring them back to full strength?! 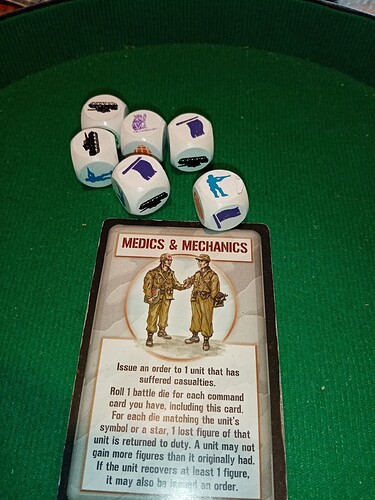