Historical Background:
Colonel Heidrich, commander of the 3.Fs Rgt, knew that to leave the trap of “Prison valley” he must capture Galatas, which blocked the exit of the valley. He ordered Major Derpa to attack with his 2nd battalion and only with the support of the Luftwaffe. The advance of the paratroopers was first easy, under the cover of olive groves, but when they reached the open country, they were under the fire of the New Zealand machine guns that Luftwaffe failed to destroy. After three hours of hard combat, the New Zealand positions were scarcely damaged but the German battalion was decimated. Major Derpa, like a lot of his soldiers, was killed in action.

Conditions of Victory:
6 medals.
The 6 hexes of Galatas form a temporary majority medal objective worth one medal for whoever controls the village.

Special Weapon Asset Rules for the two Allied units with a machine-gun (SWAs 8).

Air Power card is not allowed for the Allies.

Barrage card is not allowed for the Axis.

This is one of four scenarios available for Galatas. Two (including this one) are by jdrommel, and I have already played the one from Richard Borg (see review here)

Historical Background: By May 24th the Germans had formed a cohesive front; they began advancing east toward Chania. On the 25th, they ran into the bulk of the Allied forces and launched a general attack. Surprised to discover the Germans had artillery, the Allied formations began to crumble and quickly pulled back. Galatos, now the centre of attention, fell after a fierce fight. Reacting as quickly as they could the Allies mounted a counterattack with their remaining forces in the area, incl…

After a long break it was great to get the board out again, and this was just the type of scenario I was looking for – quick and easy to set up and play.

It is basically a German infantry charge across semi-open terrain; in reality it cost them dearly, but here of course anything can happen.

The start was frustrating for the Kiwis – they had to sit and wait for the Germans to get into range and didn’t play a card for their first three turns.

Then the Germans quickly took the Allied right, including the artillery. At this point I thought the Kiwis were in big trouble, but once the Germans got into machine gun range the tables turned and the score went from 2-0 to 2-4 as the German right was destroyed.

A German unit broke into Galatas to make it 3-4 and, crucially, to deny the Allies control of the village (and a medal – which I hadn’t included in the score so far).

This fast-moving game saw a card reshuffle after just 25 minutes of play (when playing solo, the cards tend to get recycled quickly).

Then the Allies took their fifth medal, BUT the Germans still had a unit in Galatas so victory could not be claimed until the next move, when it was destroyed (giving a final score of 3-7).

Despite the slow start, a quick enjoyable game – perfect for solo. 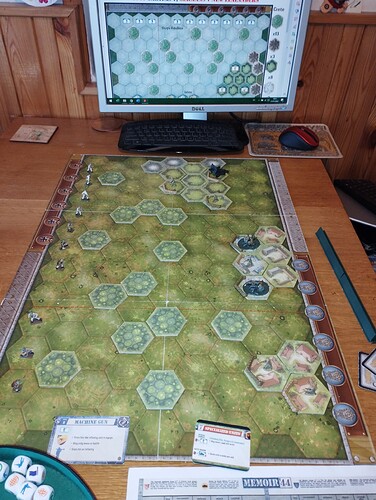 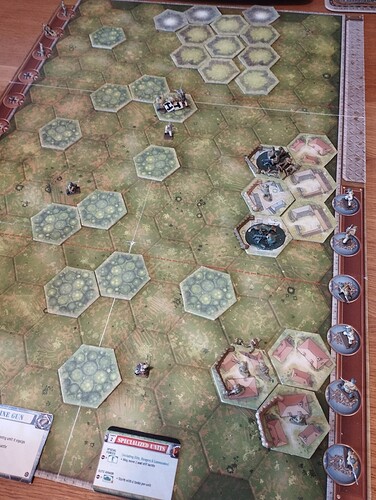