Great report - thanks.
And you have inspired me to give it a go!
I don’t have the Pacific Expansion, but I do have a copy of the Wake Island scenario, and plenty of 1/72 Japanese and American figures.
My usual game partner has just flown home to England for Christmas, so it is also going to be a solo play for me! I will follow your recommended system and let you know how it goes.

As you say, quick and easy to set up, so good for beginners and certainly for solo play.

My game lasted 50 minutes, so longer than yours but that is because it finished 6-5 to the Japanese! In fact, it actually looked like the Marines would win at one point.

Your solo system is great – it worked really well and I recommend it. I only played once, with the Axis having the full set of cards. Interestingly, the Americans twice got (and played) a Recon card, meaning (in theory) they then draw 2 and discard 1 – I took this to mean they then had 3 cards for the following turn. Do you agree?

A couple of points: the Japanese move first, not the Americans; and, the Victory Medal is not specifically for the Airfield – it is for ANY Bunker, Field Bunker, Town hex, OR the Airfield. I was also confused by this because the map clearly shows the Medal on the Airfield, which I think is a mistake – it should just be listed in the Conditions of Victory. Like you say, far too easy for the Axis to overwhelm the Airfield and get an easy Medal.

Here is my setup: 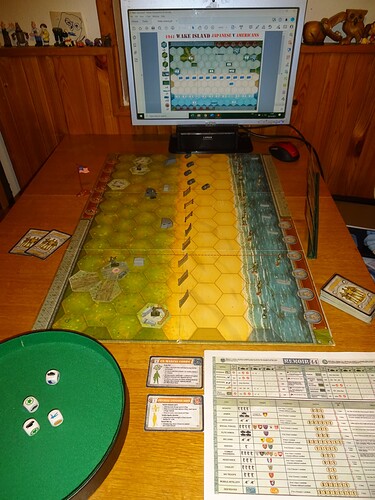 DSC052521920×2560 457 KB
I find it useful to have my laptop to hand with the scenario details and this website open for quick reference to rules (e.g. field bunkers - see second photo). I play on a relatively small table, so easily move from side to side, rather than playing upside down.
Also, you will notice that I only put 1 figure for each unit during set up. Only if and when they start getting hit do I make up the full complement. This is obviously faster and can save wasted time - in this scenario there were 7 Japanese units that didn’t lose a single figure (and 3 units didn’t even move!), so why waste time putting out those extra 21 figures? You can see this in the end game photo: 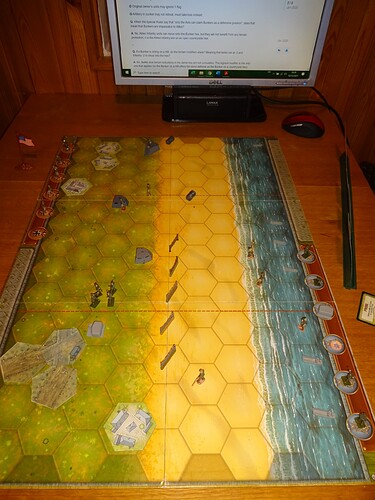 You can see from the first photo that I also dealt the 2 US cards at the beginning (before the first Axis move). When the Axis move was over, I drew another card for them but left if face down until it was their turn again. Likewise with the Allies - I drew 2 new cards immediatley after their move but kept them face down. Not sure if this is over-complicating things, but it just seemed right.

Thanks again for the inspiration to try this scenario, and to do it solo.

I’ve been meaning to get back to you properly… here goes.
Thanks a lot for your excellent feedback and input. I’m really pleased to get it. I think your idea on the Recon card is an excellent compromise. Actually, as I predominantly play solitaire I tend to ignore that text and just play the single unit, I’m lazy like that, but I think its a good idea.
You’re absolute right about the points you made. I’m putting it down to a late night and the fact that I only have the French version of the booklet! I missed the information about the Japanese medal being any of those places. I 've played the scenario a few times now on different days, so I think I will have double-checked who starts on the subsequent times. I’m pretty sure I would have moved as many Japanese as I could on the first turn to get them out of the water at least, and I would have tried to avoid the artillery.
I’m interested in your setup idea. I’ve never thought to do that, but it would certainly help on some of the bigger and more complicated scenarios. I tend to set up my board when I’ve finished for the day so that it is ready to just play when I am ready. I have a custom built gaming table that I can leave as it is, and the height is such that my son can’t reach it.
Since my original post I have adopted a slightly different system of drawing the cards, it is less ‘leg work’. I have a little plastic box that means I can draw a card from upright, and dispose of the cards to the back without having to pick up the pile at all. I bought a long piece of wood with a 3mm groove running down it that has replaced the plastic card stands. It doesn’t let them fall down as easily.

Thanks, and I look forward to seeing your next efforts. I’m on the second scenario next- Guadalcanal, and it looks like an interesting one with lots of jungle!

Must be great to have a dedicated gaming table where you can leave everything or set up the next game.
I have to use the dining table!

When you say the next one is Guadalcanal, I assume you mean Guadalcanal (Matanikau River) from October 1942. I don’t have the Pacific Pack, but do have many scenarios from various sources, and that one comes after Wake Island in one of them.
There are many other Guadalcanal scenarios, most of which have been put into an excellent Campaign, in which Guadalcanal (Matanikau River) is number 11 (not number 5, which is the First Battle of Matanikau in August 1942!).
It can be confusing keeping up with the scenario names, especially as many don’t mention the campaign/operation name in the title (e.g., Henderson Field - I’m sure many Americans know that is Guadalcanal, but I’m an ignorant Brit when it comes to the Pacific!).
Also, I organise my scenarios by year. So Guadalcanal gets even more confusing as it was 1942 to 1943!

This is another aspect of the game I really appreciate - my knowledge has been greatly expanded by reading the scenario briefings and doing further reading on the units, weapons, locations, etc.

The gaming table came out of necessity. I originally played Axis and Allies and to fit games in, I had to span them over days and weeks. It was all too tempting for my then toddler to reach up and disturb the table or start eating infantrymen, so I built the table myself. I play standing up, and I’m 6ft5, so the table surface is much higher than normal tables. Its a 90x90cm table surface, which was originally so I could play the Starwars X wing miniatures game, but that gives me plenty of room. I don’t play breakthrough yet, but I think it will just about fit onto the table. If the wife joins in, we play down on the floor (we live in Japan), but that is after the kid goes to bed.

You’re absolutely right about the next scenario, its just the next page in the Pacific booklet. I’m also British (Leeds), so I don’t have much idea about the Pacific theatre either, despite living in Japan, but I’m very slowly learning about it. I’ve done a lot of reading about WW2 since I began playing the game. I don’t play chronologically, but I like to have a look at maps and how various battles link up.

One little project I have in mind (although have not yet begun) is a more user-friendly database of scenarios. There is one of official scenarios, but there is not much information to hand. I would like, for example, to search by special units, nationality, the use of certain rules, and so on. There are some excellent campaigns available, so I would like them listed on the database too, and it would be easier to see how they relate to each other.