From one extreme to another!
This is one of the best scenarios I have ever played (in ten years of playing). My opponent certainly enjoyed it immensely.

Sorry, but I cannot find where I originally got this scenario from, so I have cut and pasted the details from the pdf I have of it: 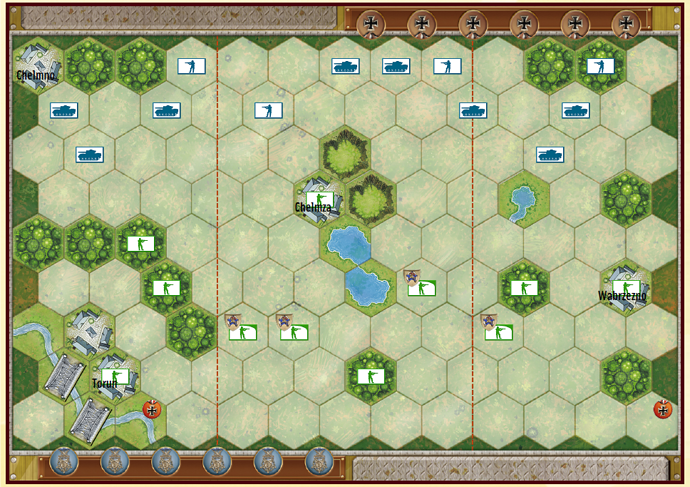 Historical Background:
Phase II of the German invasion of Poland was the Destruction of the Polish Armies. German armor raced ahead cutting Polish units into ribbons as the Luftwaffe ruled the air attacking anything that moved. It was Rumored, in battles like this that the Polish cavalry charged German armor with lances and sabers. Later to be proved untrue, but still believed my many to this day.
Briefing:
German player gets 5 command cards and moves first
Polish Player gets 4 command cards
Conditions of Victory:
Germans 6 medals of which 2 must be Armored exits.
Any FULL Armor unit that exits the back of the board between the markers, counts as a medal. Any 3 damaged Armor units exited off count as one medal.
Polish 6 medals or deny the German any way of completing their Conditions.
Special Rules:
Blitz Rules are in effect.
Airpower card is normal for the Germans but played as Medics and Mechanics for the Polish.
Polish special infantry is the Polish Cavalry. See Cavalry rules on page 6 of the Eastern Front Expansion.

The reasons why this works so well are ease of set up (very few terrain hexes) and the condition of victory that the Germans had to get FULL armour units to exit the board.
This led to the Polish adopting the tactic of attacking all German armour with the aim of knocking out at least one tank.
And it worked - almost!
The Germans got one tank unit out intact, but the Polish (thanks to great dice) destroyed the others until only one was left, which had been reduced to just two tanks. Despite heavy casualties, this would have meant victory to the Poles. But then the Germans played Medics and Mechanics, got the tank unit back up to full strength and just got over the line!

Note: as you can see in the first picture, when we set up we usually only put one figure/tank on each hex. As and when a unit goes into action we put the full complement on.
This has two advantages - speed of set up, and allowing me to use my ‘special’ painted tanks! (So each those 1/144 Panzer VIs represents 3 of the smaller models that come with the original MM44).
Set up: 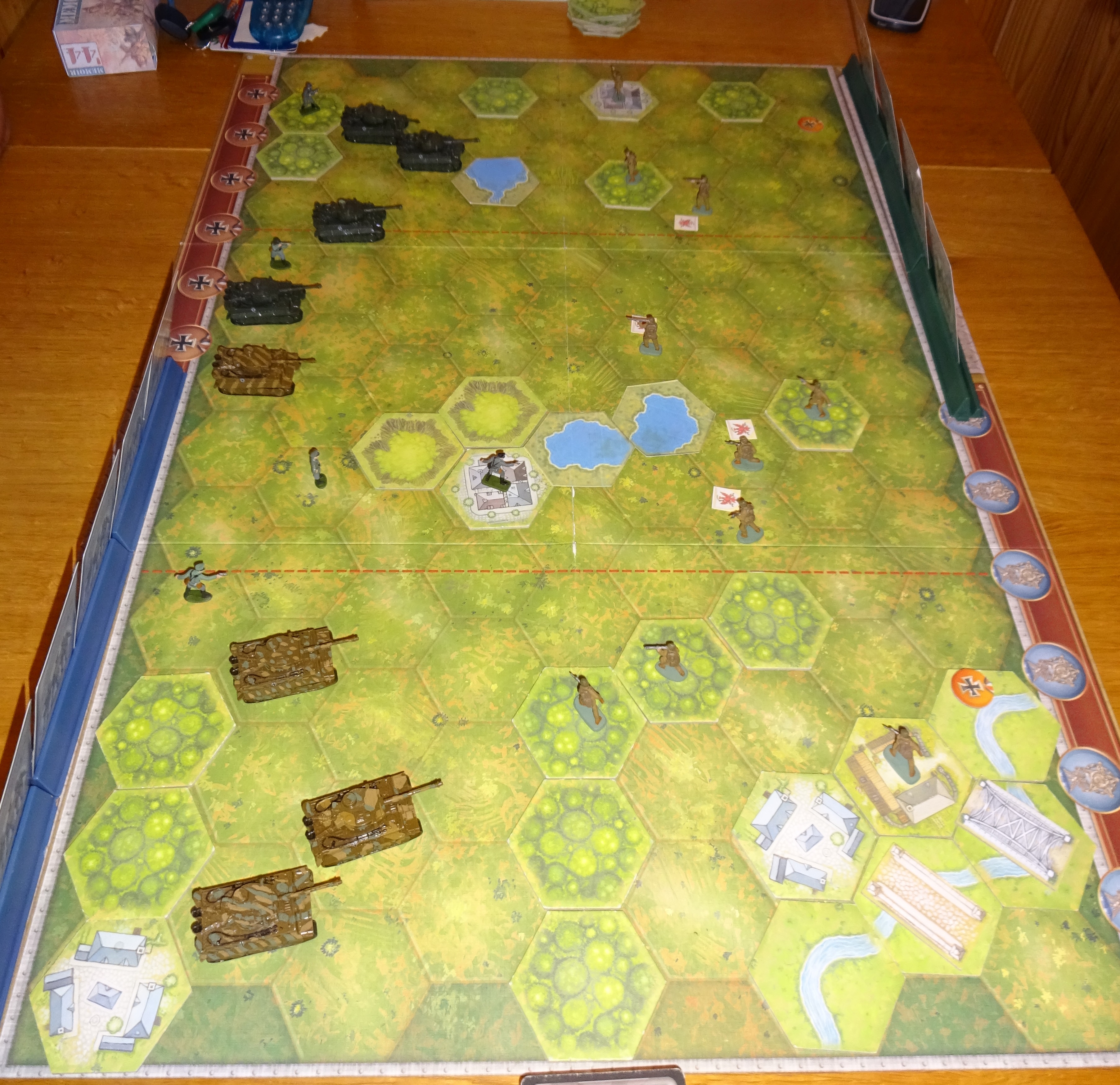 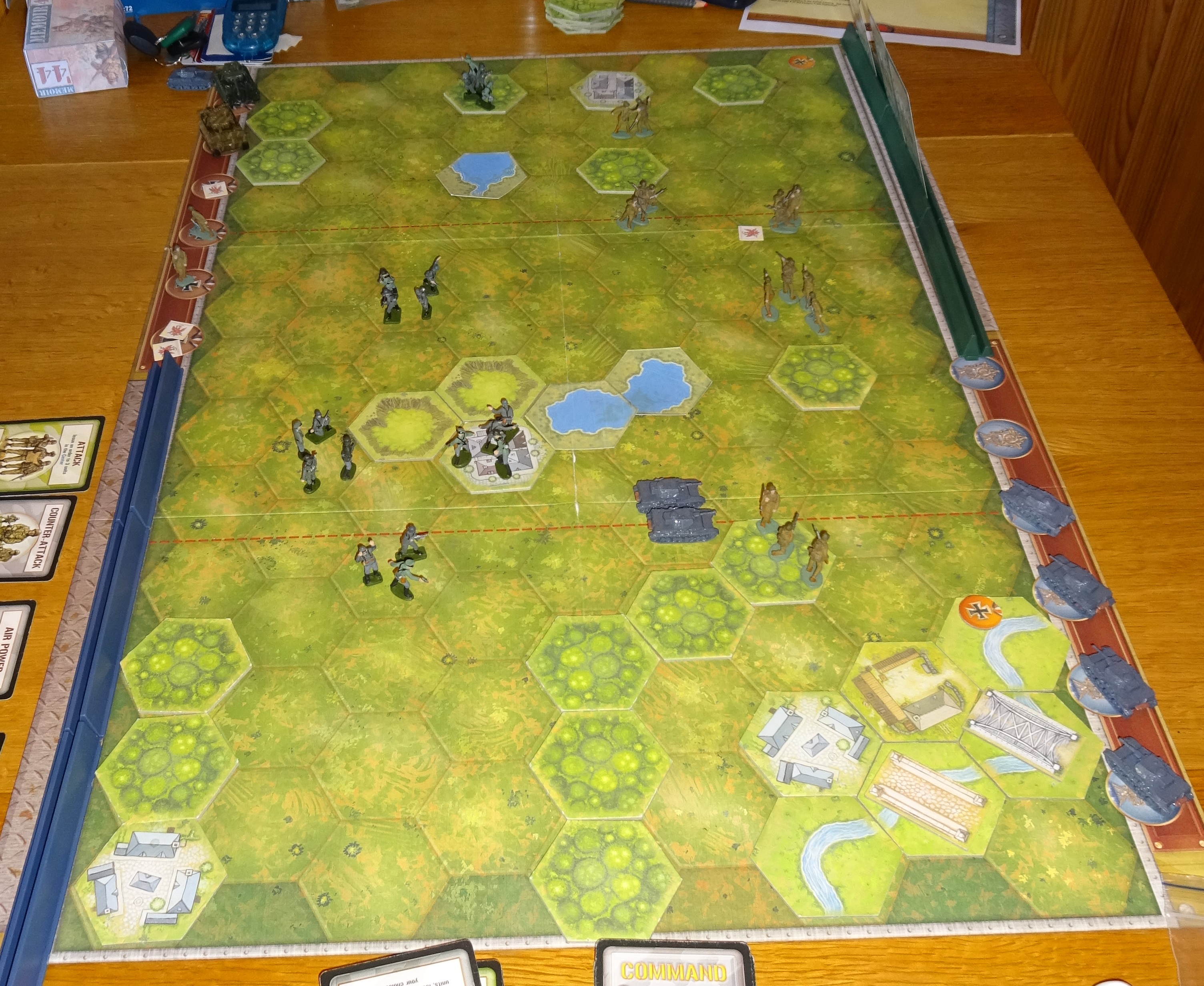 This one looks fun because of so many armored units and so little terrain! I was looking at the setup picture and then was wondering where the tanks had all gone. So it seems 2 German units were able to cross the field, but all the others were reduced to rubble!

Yes, I highly recommend this scenario to everyone.
Quick to set up, great to play.