Don’t miss the little tactical quiz at the end of the report!

*there is a second scenario by NickyC2, plus an Overlord version.

Historical Background
The Battle for Crete opened on 20th May 1941, when Hitler’s paratroopers landed on the shore of Crete, by Maleme Airfield, and the city of Chania. The Germans made a push toward the airfield and the town, by were pounded by the New Zealand infantry. The Germans attacking Chania were also held up. They encountered some serious Greek resistance, and were bogged down. Of the paratroopers that landed, many were hit by mortar fire within seconds of landing. Cretan resistance seriously hampered German advances, as the Germans never captured Maleme airfield. As many as 600 German paratroopers died on the first day.

Conditions of Victory
5 medals.
Chania and Maleme Airfield are temporary medals for the Axis.

Special Rules
Before the start, the Axis have an airdrop. Drop 3 Infantry figures from 30 cm (12’’) above the battlefield. A figure which falls of the board or lands in a hex with another friendly or enemy unit is out of the game (no medal). If the unit landed safely, add 3 more figures and it is ready for action.

Report
Set up time 18 minutes, playing time 36 minutes.
A really great scenario, with a bit of everything. 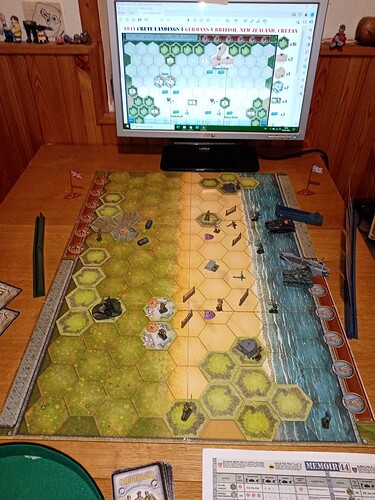 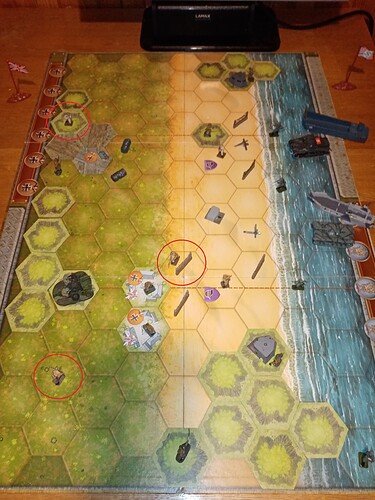 The Germans had a really fortuitous paradrop (see red circles in photo 1): right by the airfield, next to the town, and in open countryside close to the British artillery.
However, the rules say that these units cannot battle straight away, and that probably saved the British from early heavy losses.
Poor cards and bad dice saw the Germans quickly lose thier paradrop advantage. The Allies soon established a 4:1 lead; a Firefight saw 8 hits on German paras, then two Direct from HQ cards saw further heavy losses. Two of the paradrop units were wiped out before they could do any damage to the British.
But suddenly the cards turned and it was 4:4, with the Germans on the brink of victory until a tactical mistake (or was it bad luck) gave the game to the Allies 5:4 (see photo 3).

QUIZ TIME!
So, here is the game-changing tactical mistake / bad luck
Try to figure out what went wrong!
The score is 4:4 (1 more medal to win!).
On their previous turn, the German infantry (C) had attacked Bunker B and thrown 2 flags, forcing the British infantry (A) out of the Bunker (into hex D - the German armour was not involved at this stage).
The British (A) only had 2 figures, but moved from hex D to hex A to attack the Germans (C), who only had 1 figure. But the British had no hits with their 2 dice, failing to win that last medal!
So the Germans attacked, including the Armour, which moved up to D.
3 dice from the Armour, 2 from the infantry … what could possibly go wrong?
(Answer below the photo.) 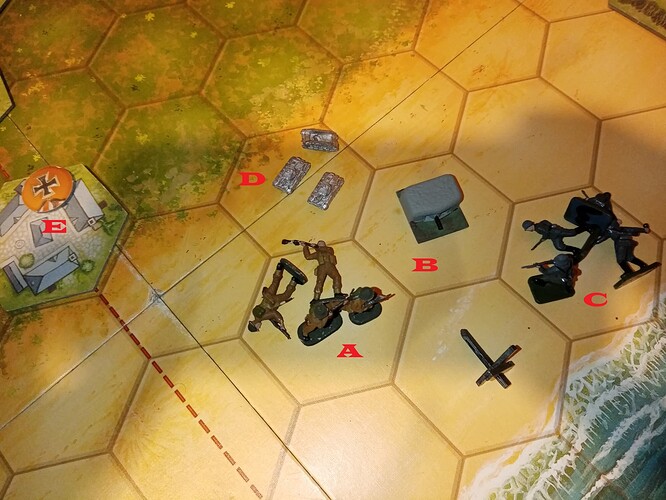 For some rason, I decided to let the infantry (2 dice) take the glory of winning the game rather than making sure with 3 dice from the Panzers.
And, of coures, the German infantry again threw 2 flags!
This allowed the British to retreat into the town, where a single die from the Armour had no effect!
The British won the game on the next go.
Was it a mistake? Or just the luck of the dice?

I really enjoyed this scenario (solo) and look forward to part 2 soon!

Wow, that’s a close one. I’d say it was technically a mistake, but not one that I wouldn’t have made myself. What is the probability? 8.3%? I guess it’s easy to second guess AFTER the fact