I really do not know what I’m doing with this game at all as I’ve only really played it once. but that hasn’t stopped me from rolling out and getting 2 memoir 44 base games, overlord, eastern x2, med x2, pacific x2, breakthrough x2, desert/winter x2, terrain x2, all six battle maps, air flight plan, equipment pack, Tactics&Stragey Guide, and just ONE … well now three… Winter Wars.

I have an 8 foot by only 38 inch wide table so I’d ruled out D-Day with its 4 foot depth, but could I play that with the map overhanging one side by 10 inches and that long side near a wall limiting players to sitting on one long side and the two short sides? I might be able to play overhanging equally on each side but it’s just courting disaster as the space is under 100 inches wide and only 90 inches at one end of the table. Am I correct to rule out D-Day should it come back to retail?

If no D-Day, is my collection complete with just one Winter’s War?

Woah! You only played it once and already have that collection? Congrats!

I only have one of each, and I feel my collection is as complete as I need it to be. I may add something to it at some point in the future, but for now, I have more than enough. It all depends on you, and your game mates.

You have a LOT of game to go through now, so take it easy, and enjoy it. Worry about getting more later.

As for the campaign books, you are not crippled at all. They are cool, and it’s great for playing linked scenarios, but not a must have at all. There are also many user made campaigns that are very good, if you want to try that for free.

I’ll have to edit OP and add Tactics and Strategy Guide as well to the above list… and your advise didn’t work as I just got two more Winter’s Wars haha. I’ll patiently wait on the Campaign books for reprint and easy enough to buy the digital version of volume 1 at the moment of need.

Double breakthrough is something I’m interested in, but most would say two terrain packs is over kill even for the biggest scenarios, but I snagged an extra one while they’re available as part of an Amazon France order.

I’d still like to know about playing D-Day Landings: 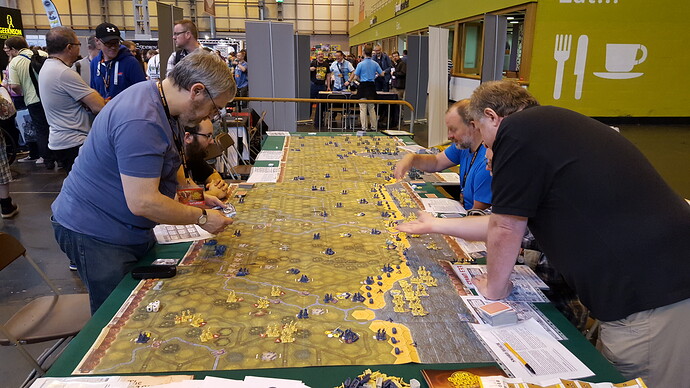 Its out of print now, but I’ve got a feeling it will be back. I’ve heard some say you could use six! Winter’s Wars with this. I’ve gone this far so it would be silly to not get more winter’s wars now if my end goal is D-Day. Probably would play it as a grand 2 player game, but could go with a big game or something (family gathering) down the road. This was always my plan, but then I saw the size of the board and I said no to the idea of D-Day. But I’m not sure that is the right decision and wondering if others have had any luck fielding D-Day on a smaller table.

edit… found this on size. Six map scenario requires an obscene amount of space.
One board will measure:
width: 70,6 centimeters (about 28 inches)
depth: 114 cm (about 45 inches)

So basically that is British landings on the left and American on the right (the two three map scenarios.) Many of the two map scenarios would be manageable save this one: 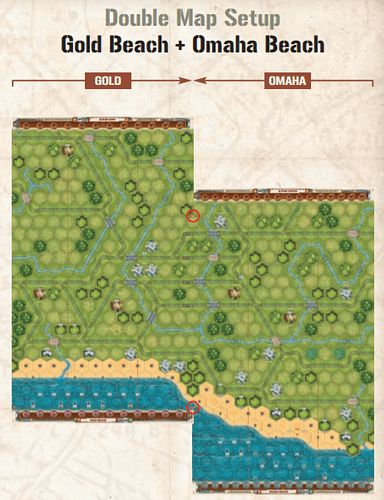 DDaygoldOmahabeach462×601 392 KB
The above may be as much as 57 inches deep, but since the maps are 24 inches wide you could run it sideways on a four foot deep table.

I’ve decided I can come up with some setup that will extend my table by 7 inches or so with a 1 x 8 piece of wood down the road somehow clamped into place.

I can get the base games later as they’re much more readily available. And I won’t be getting the 4 optional Med.Theater Packs. 2 mapper Sword/Juno wants three optional Meds. The three map British landings will require clamping a 1x4 board about 2 feet long on the other side of my table which won’t be too bad. These requirements may be extreme as based on information before release and much more detailed analysis of unit counts etc. is here and I suspect you could scrape by with less in some cases with a little creativity: 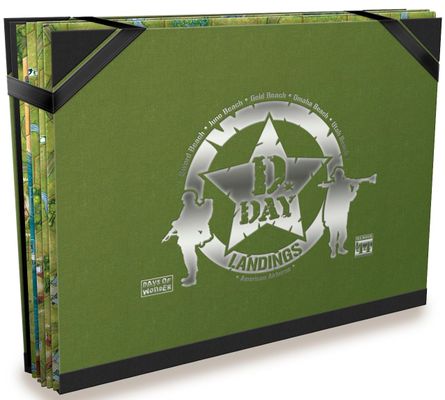 I went through all the maps and determined how many units start on each map. Based on the starting number, I have provided a general idea of how many sets you will need to play this expansion. Keep in mind that a Base Game of Memoir '44 can field 10

The above answers my D-Day Winter’s War quandry and I snagged the last two at Coolstuff Inc. where I have a preorder still on hold. …and I see my print and play hankerings might get some vent: D-Day Landings: Breakthrough Format
(looks like one can print and play D-Day landings, yes!)

One question remains from the OP:

Looks like something that would be possible by combining four collections, but wow, I had no idea the complete setup was 14 feet long!

Any idea what the estimated play time would be on this? 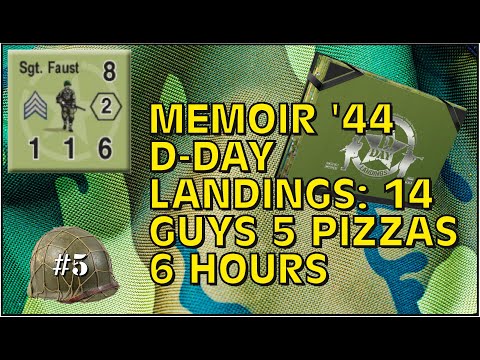 and if trying to do this two player that might take really long.

Play time really isn’t that long. It’s basically 6 breakthrough games side by side by side…
I run a D-Day Landings play through every year and it takes roughly 2-3 hours to play. It almost feels like it takes more time to set up than play!

Not sure where you guys are from, but come to Chattanooga, TN in early June and you can join in on the fun!

How did you get the Pacific and Mediterranean expansions? I’ve been after those for years!

It helps to buy in quantity from overseas due to shipping costs, let me look for you…
https://www.philibertnet.com/en/search?controller=search&orderby=position&orderway=desc&search_query=memoir+44&submit_search=

You snooze you lose, 15 euros shipping on one item, 25 euros on three. Philibert has done a fine job armoring for international delivery for my two deliveries. They don’t have desert/winter board. Amazon France has that, but they don’t package well and with international shipping well you may want to put a note on an order getting those shrink wrapped boards for them to take care. Don’t snooze on Battle Maps and Zatu Games in UK has those and they are learning about shipping those due to my problems (always make seller inspect battle maps for missing or wrong minis and even have them pull out envelope contents and take a hard look that those have not been damaged.)

The equipment pack and map packs were supposed to hit US this Summer and Stalingrad did quickly selling out at Miniature Market who also had Equipment Pack along with Game Nerdz. With container ship costs its hard to say what is going on and why only one of the four original map packs has not been for sale in the USA. I have no idea where Eastern Front came from in USA and why Pacific and Mediterranean have been available in Europe, unannounced. My guess is Asmodee is flushing out their reserve stock on some things to help their bottom line given they’re up for sale.

I tip my cap to a true completeist!
My goal with the D-Day maps is to play all the American beaches in a session, then all the British beaches in a separate session. This reduces the needed space to a manageable level, I think. Here in the States a sheet of plywood is 4’ x 8’, and will fit three maps pretty well, so using that for a topper I can make it fit, I think.
On more base games for figures, I prefer to have a few of the Overlord expansions, as I don’t mind using the “chits” (“counters” to us aging old-timers) to fill out the units. In fact, they’re easier to move than a full four-figure unit.
Good luck, and let us know if you carry off a big D-Day session!

I ordered 2 copies of each, Pacific and Mediterranean in September 2020 from Boardlandia. They also do free shipping in the US.

When you think of it that way it’s not bad. 6 simultaneous BT games at once. Might have to plan a trip to the Smokies in June with a stop in Chattanooga!

That would be great! You would be more than welcome. Keep June 3-5 open on your calendar…D-Day Landings and a tournament to go with it. I’ll be announcing details and getting the word out soon… You’re just getting a pre-invite…

Are you close by? Come on and visit if you are… Or even if you’re not. We’d love to have you!

I missed this post when you made it. Good to know on the overlord chits. I’ll have to figure out quickly on what I want as the Overlord expansions are starting to dwindle. Its a hard call as their may be some great Black Friday deals on the base game. I’d probably go with two base games I own and two Overlord expansions (already have one.)

The thing that burns me up is the optional 4 Med packs for the British beaches three board setup. I’m assuming this is just for color matching and is like having 4 base games. Your chit Overlord preference sounds even more sane because I’d have to buy two extra med packs to avoid chits. So that is two more base games and two more med packs which is really starting to add up OR just one more overlord for me. Sold haha. It burns me up to pay a bit more for Overlord than I might have if I’d fully thought things out. Please let me know if you agree with this logic before I get a 2nd possibly useless Operation Overlord.

My big D-Day session is most likely two player (or maybe even solo) and just half of the boards.

Sure, no one wants to pay more than necessary. Funagain Games has the Overlord expansion for $16. 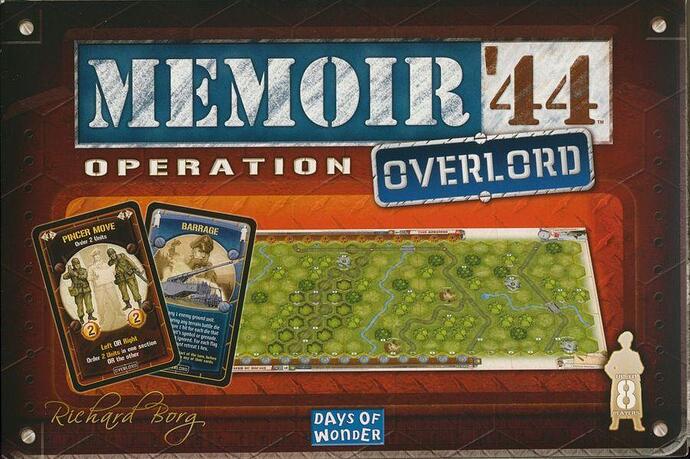 Take your game to the next level with Operation Overlord and relive the battles of WWII on a grand scale. With up to 4 players per side, you will soon experience the highs and lows of being part of a military-style chain of command....

Well I take that as an endorsement of that 2nd copy.

I deal with GameNerdz all the time so I’ll probably cough up the extra $4. I will punch around Funagain Games and see how many copies they have left plus perhaps they have something else.

Well for the record I couldn’t help myself from getting not only another Operation Overlord, but also another New Flight Plan and Equipment Pack. From the fog of war its hard to remember the logic, but I believe that for some double breakthrough scenarios this will be needed. Call it Memoir 44 Nervosa, but I blame Boardlandia’s Black Friday sale which is still going and they also have Through the Jungle and Desert with those Combat cards.

As I peruse the logic for a 2nd Operation Overlord, I believe that I have all that I need.

My thinking is that the Med Theater Packs are just for the proper color troops and substitute for half the troops in the 4 base games. So in this case 2 Med. Theater (Pomms) and 2 Base Games (Jerrys) you have a good supply of the miniatures and the chits from two operation overlord expansions will give you the chits for the equavalent number of miniatures that four med theaters with four bases games would provide. Not a bad deal for just another $13.59 over the standard setup.

My 2nd post with all the maps has an error for the very deep Gold-Omaha scenario. I state the boards are 24 inches wide and you could just play side ways on 4 foot wide table. This is incorrect. The boards are 28 inches wide, so its 56 inches.