Im been collecting figures since the 1970s for all periods but mainly WWII so I have a few figures.I thought it would be fun to make Nations Special Weapon Assets for all the Nations. I used all HO figures and found bases the same size as the ones in the Equipment Pack. So for each Nation I made Mortars,Machine Guns and Infantry Anti-Tank teams. I thought I would give people some ideaes to be a little creatived. Injoy 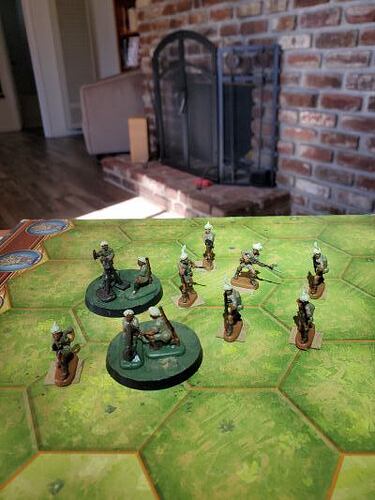 Excellent!
I am doing likewise.
What are the Indian figures? Some of them look like the Indian Brigade from Atlantic, which don’t have such a good review. The only other ones I know of are Indian Troops from Strelets, which are apparently much better.
I am hoping to get one or the other at some point - the Indians are sadly under-represented in the model world.

Good idea. I found that using 10mm model infantry looked better against the other models in the game.

Great thanks.
Please post some more when they are ready!

Can I ask you about the skin tone you used for the Indians?
Always a tricky (and sensitive) subject!
I darkened my flesh paint a bit for the Ghurkas, which wasn’t too bad, but yours look really good.

I do not know if they make it anymore but it was a set of acryic paints , of 12 skin tones called Dragon Colours that I got 10 years ago.