Special weapons assets and other units - test your knowledge!

Many scenarios allow for SWAs - special weapons assets. If you look in Intel, you will find a list of them.
But, how often have you used them? Are they good? And do you know them all?!
The reason I am posing this is that I have a lot of left-over figures from the armies I am painting (see here for details). They are usually those in prone position (lying down), in groups, or with big weapons!
So I decided to see if they could prove an alternative to the tokens you can use for SWAs.
Here are some photos. What are the SWAs? (bonus points if you know the armies and weapons!). I have included the tolkens with some (the others I haven’t printed yet!):

Many of these pictures have been updated since my original post. 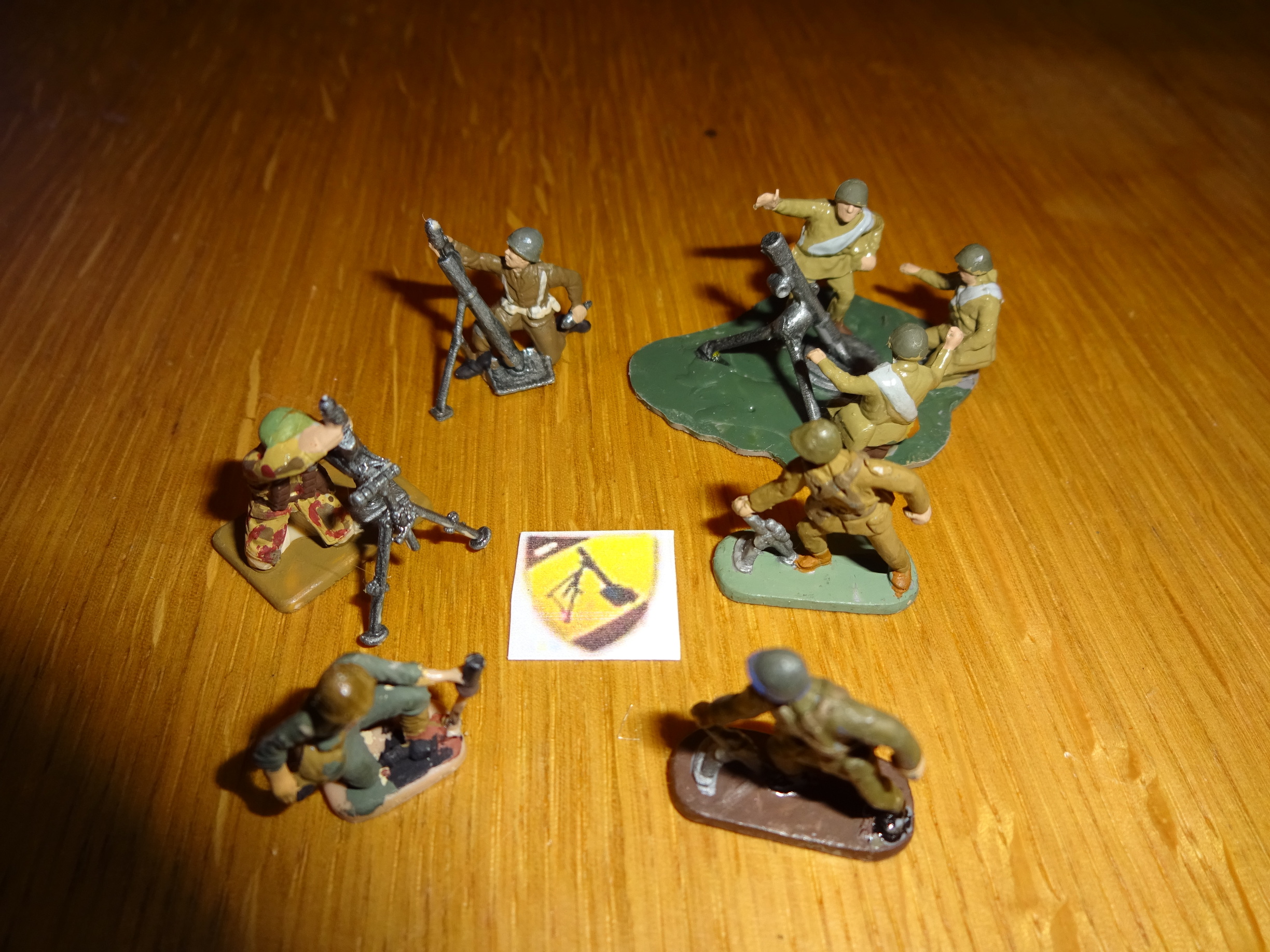 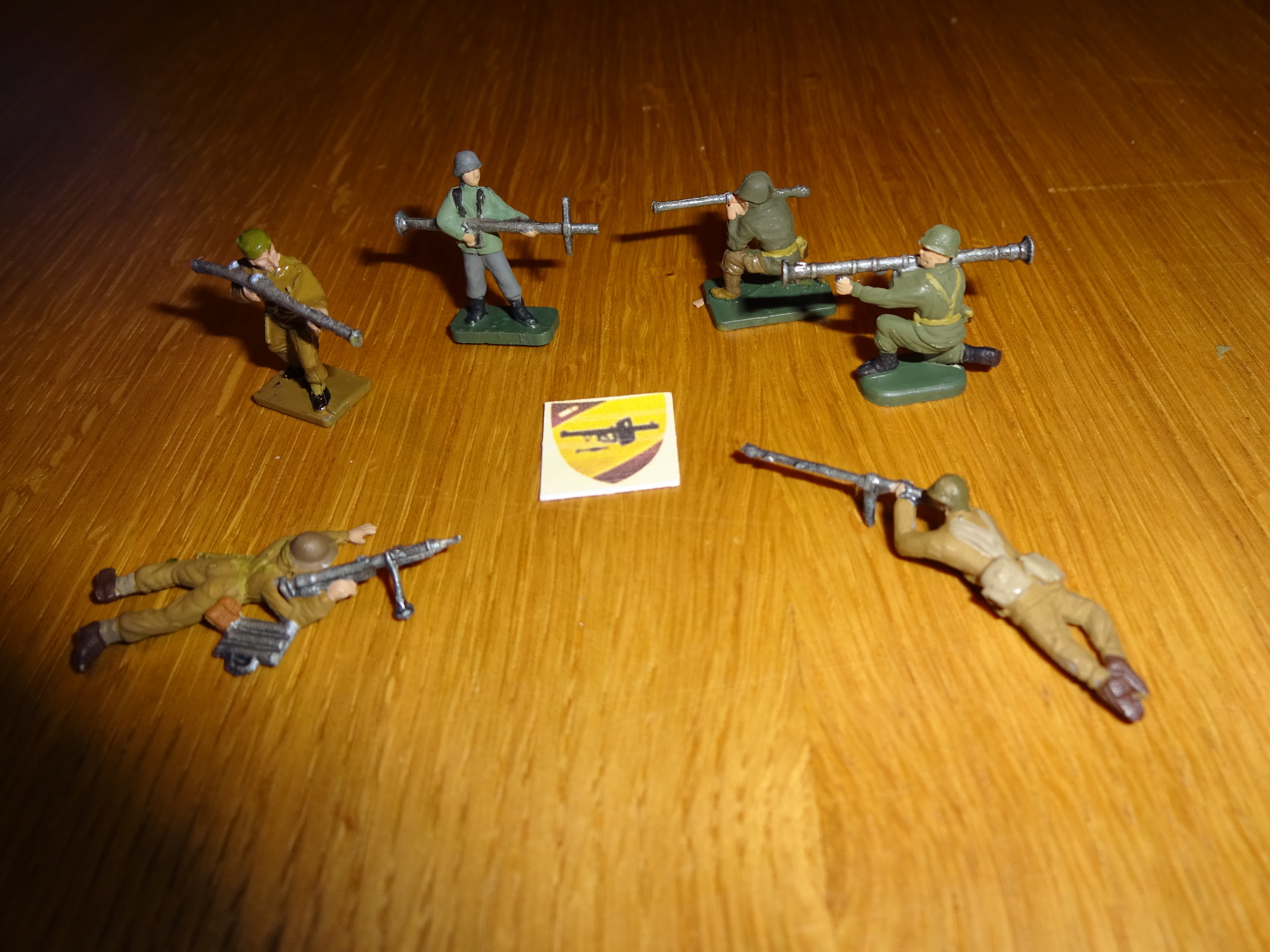 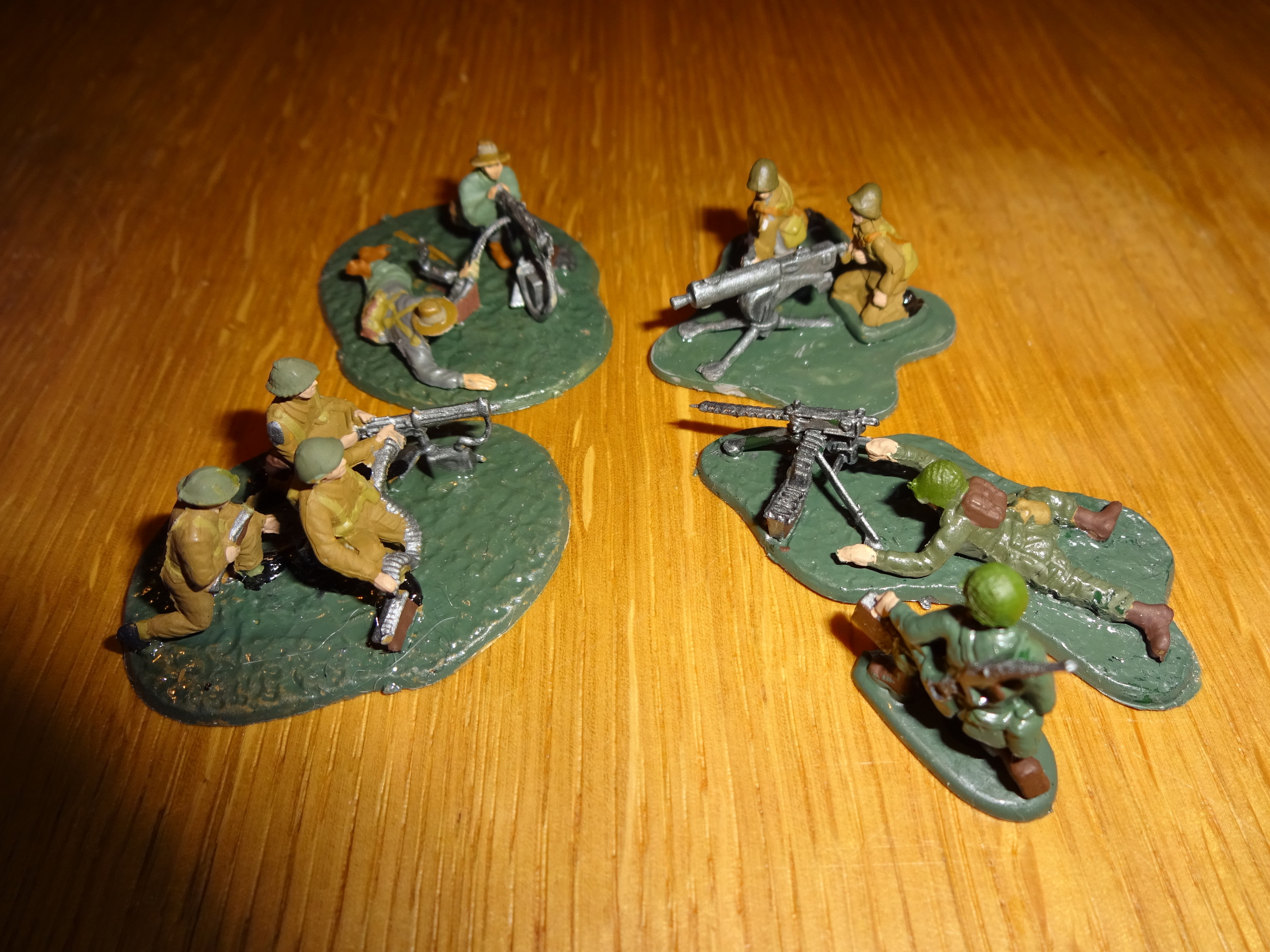 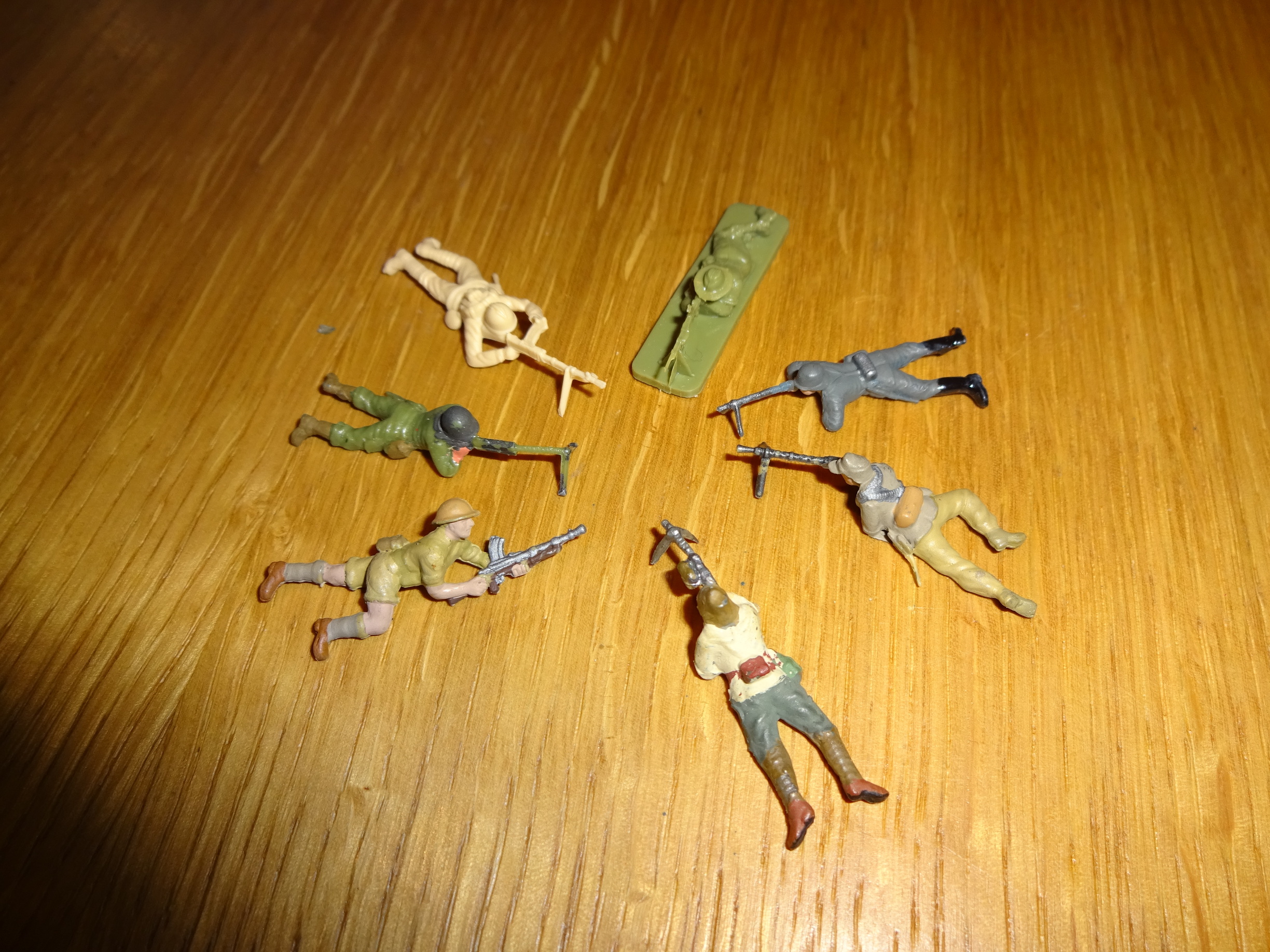 There are also other units besides the standard infantry, artillery, and armour.
So what are these? 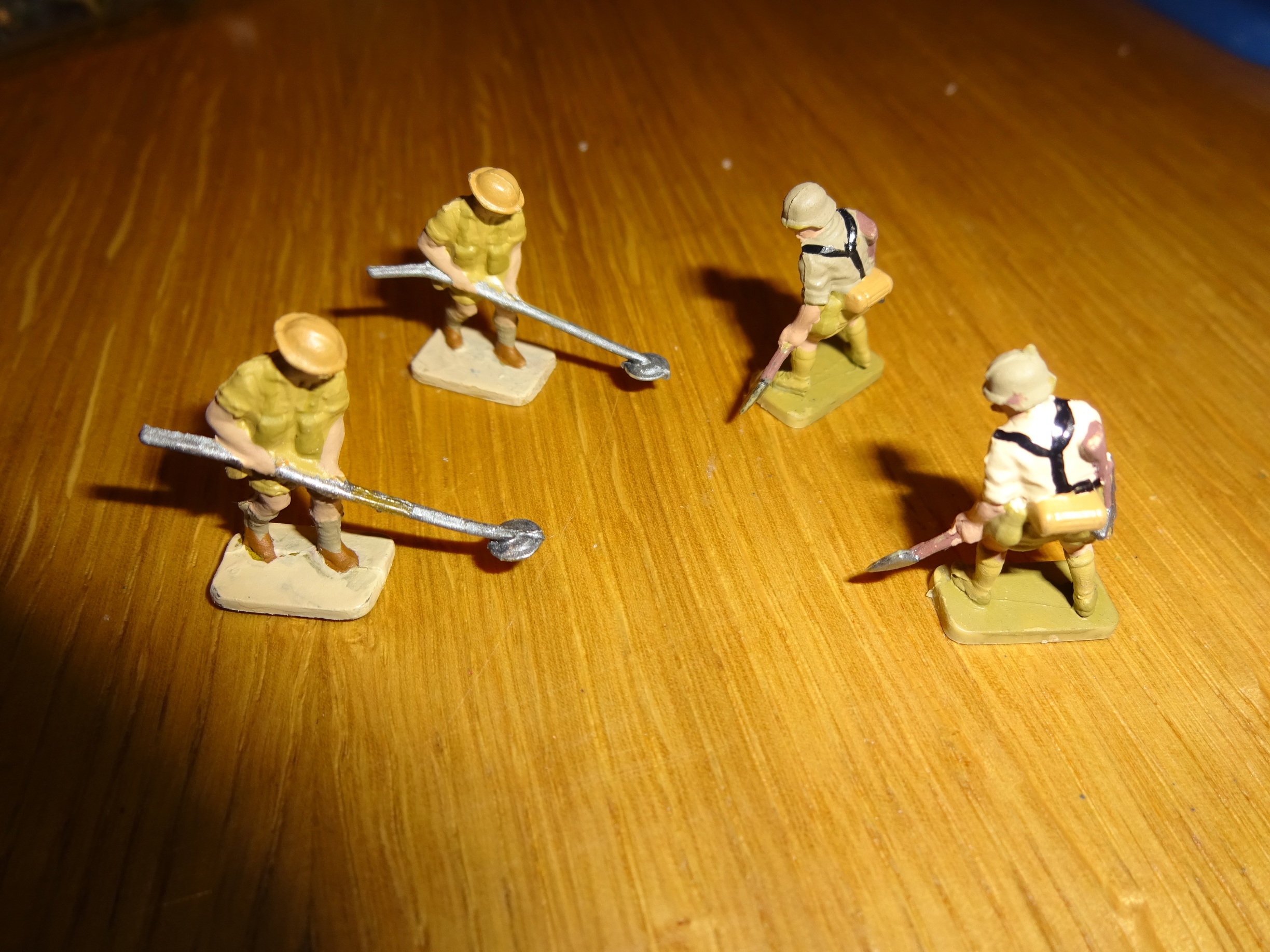 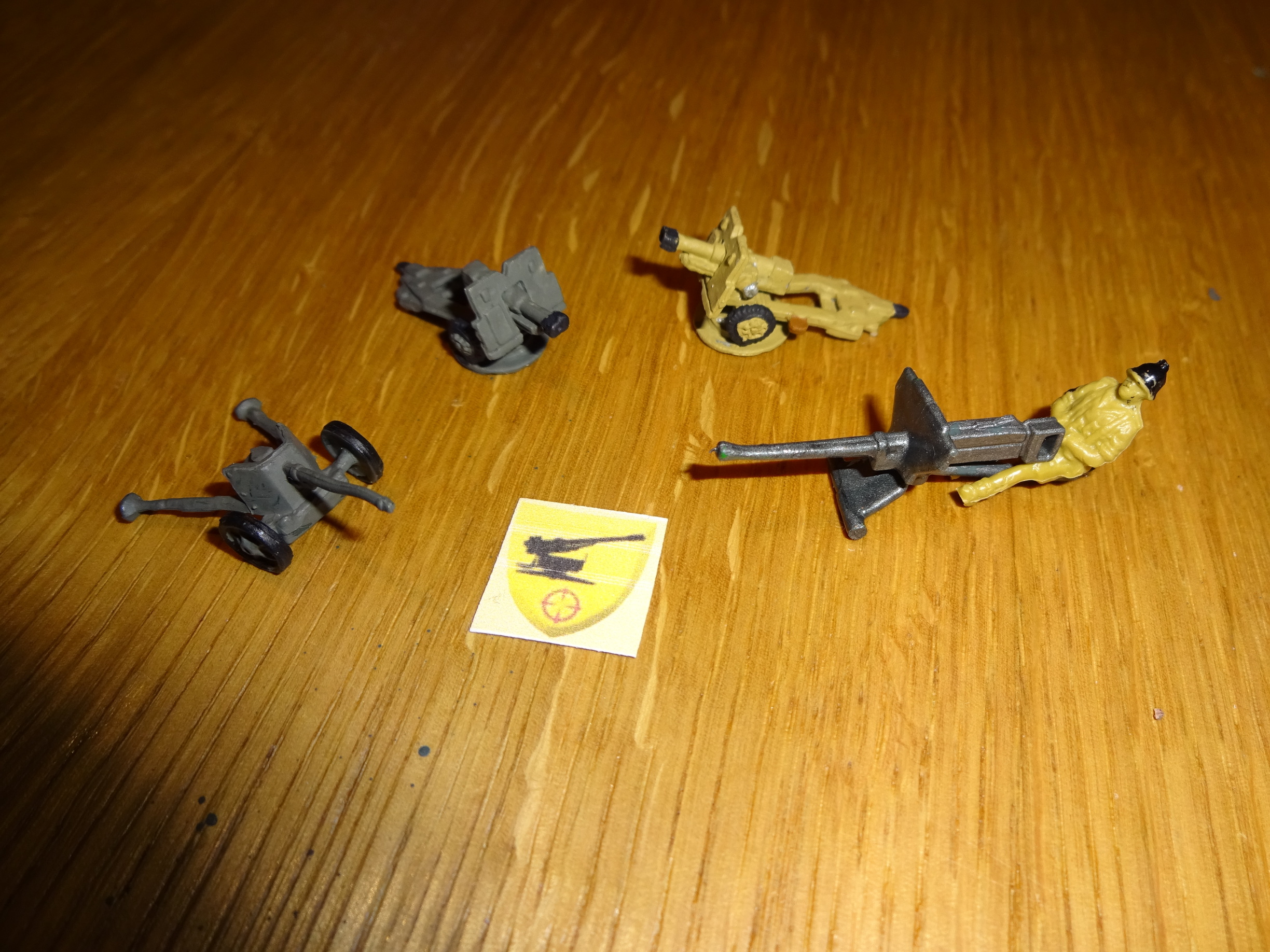 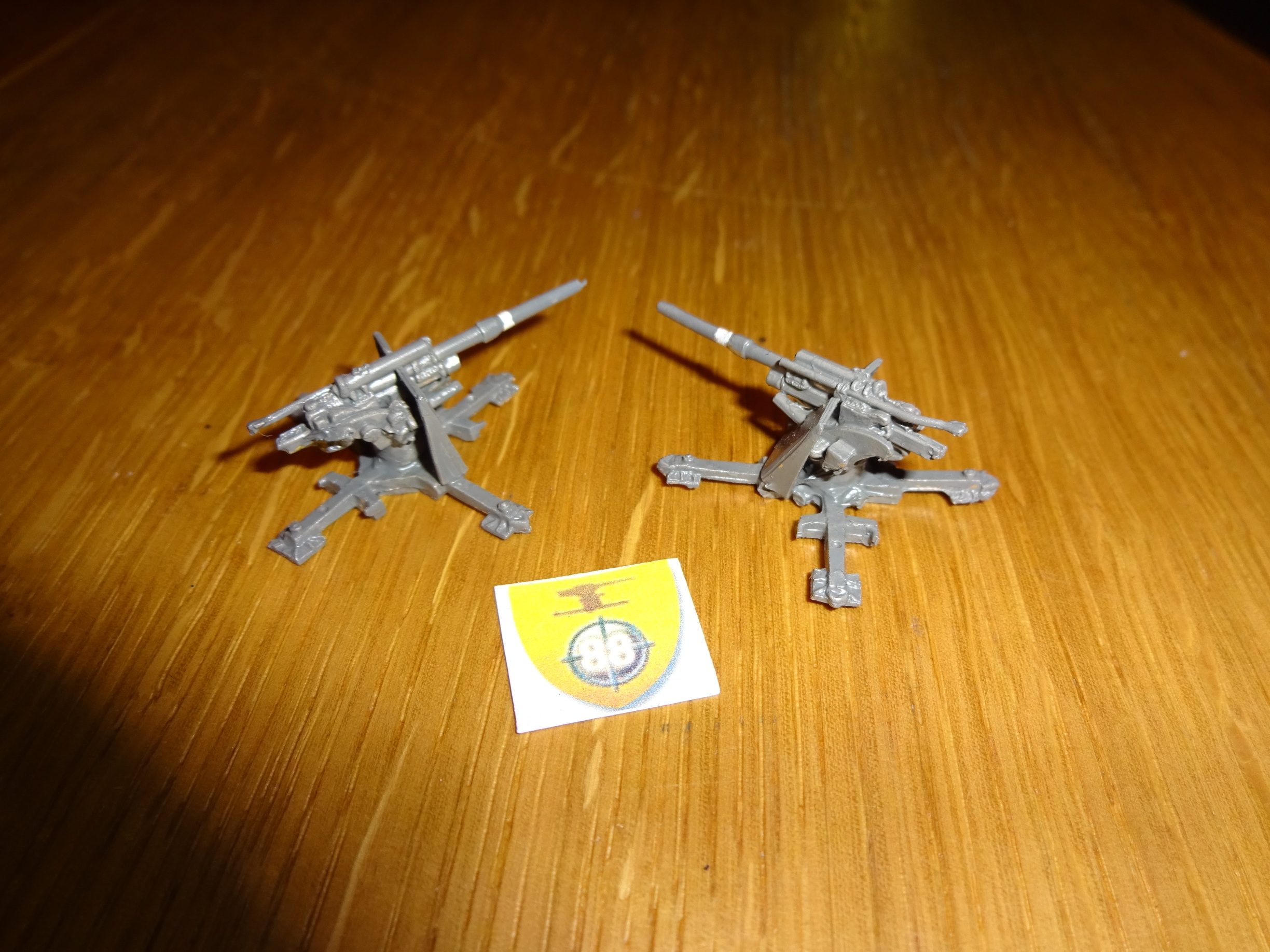 And, finally, I don’t think these are in any scenarios, but maybe they should be: 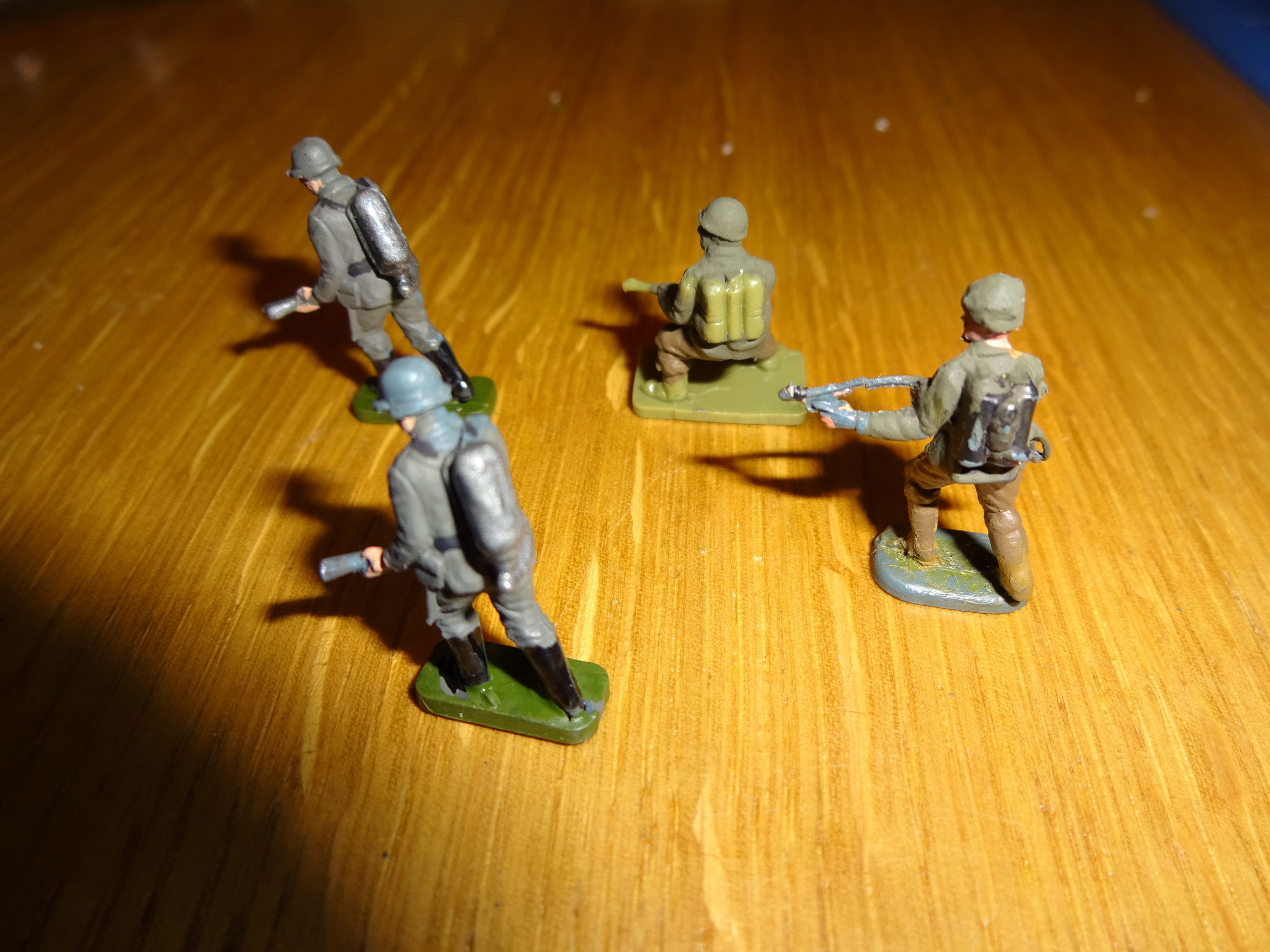 Looking forward to your answers and comments.

You could use the flamethrowers and mine detectors to replace the engineers badge.

I have used most of the SWAs. But I play the game using 6mm models for all types.

1: Combat Engineers (with mine detectors?)
2: Some form of heavy artillery, the ones that can lock onto targets and then give you an extra dice
3: Flak 88 guns, supposedly one of the biggest enemies of allied armor since it outranged most tanks
4: Flamethrower infantry

are my favorites.
Neat idea and painting!

Thanks for the responses.
I’m going to go through this bit by bit.

Picture 1: mortars.
Clockwise from bottom left
Japanese infantry (Esci); German paratroopers (tropical uniform, Italeri); Free French (Italeri); Russian infantry (Airfix); Polish infantry (HAT); Slovak infantry (same as Polish).
The obvious first problem is the size of the Russian unit. An SWA is placed next to the unit it operates with - but the Russians take up a whole hex of their own! The German para is also pretty big.
One way round this (which applies to all over-sized pieces) is to have some sort of proxy. By this I mean having the SWA token with the corresponging number of figures to the side of the board, reducing the number of figures if and when it takes losses. When the last figure is lost, the token goes to the opponent and the large figure is removed from the board.

DISCUSSION
I like the mortar SWA - they ignore terrain protection and have greater range. The questions are, how many can you have in MM44 and in which scenarios?

Picture 2: anti-tank weapons
Clockwise from bottom left
British infantry (Esci) with PIAT (Projector, Infantry, Anti-Tank); British commando (Airfix) with an unknown and unfeasibly large weapon (which commandos would never have taken on a raid!); German infantry (Airfix early edition - 1961!) an unfeasibly large panzerschreck; US marines (Airfix) with a bazooka (but no one to load it!); Free French (Italeri) another bazooka without a loader, and also impossibly large; Polish infantry (HAT) with wz.35 anti-tank rifle.

The figures in the prone position (lying down) take up a lot of space - see my comments above (mortars) for how to get arond this. But how cool are the PIAT and anti-tank rifle!

DISCUSSION
The rule card says Stars hit on armor (or, in British English, Stars hit armour!). So does that mean the normal armour symbol on the dice does not work?

And the same questions as with mortars - how many and in which scenarios?

Thanks in advance for any ideas and comments.

Picture 3: heavy machine gun (HMG)
This picture has been updated (19/9/20) - I discovered the US paras (Revell) with their .30 Browning M1919A4 (bottom right); above that is Polish infantry (HAT) with a 7.92 mm wz.30; to their left Australian infantry (Revell) with a .303 Vickers; below them British infantry (Esci) also with a Vickers.
I added the bases to the Poles and Brits, and gave the latter an extra figure.

The problem with such weapons is the number of people needed - six to eight men when you include moving them and all the ammo they need.

DISCUSSION
So, the SWA card says machine gun, but what does that mean? The picture on the token is an HMG (probably a Browning M2), but as mentioned above, that involves a big team. If the SWA is attached to an infantry unit, surely it is not an HMG?
Plus, the effective range of an HMG is 2000 metres; for an LMG it is 550 metres (the same as a rifle). That clearly makes a big difference to the game! But the battle rules for machine gun are the same as infantry (3,2,1).

So this SWA must be an LMG, which raises the question of why bother with a machine gun SWA? All infantry units woud have LMGs already.

Looking forward to your thoughts.

Discussion of some of the discussion points:

Mortars are in quite a few scenarios, but I’m not sure the count. There are many official scenarios and hundreds of nonofficial scenarios created and mortars are used in many of them. Typically, you would not have more than a couple mortars per side in a scenario.
Anti-Tank guns hit on armor with stars, along with the grenade and armor symbols, effectively increasing your odds of a hit to 50% per die.
Machine guns do the same to infantry, also getting a hit on a star, increasing the odds to 66% per die for infantry.
As for effective range and types of machine guns, I think Memoir did an excellent job of keeping it simple. It would be really easy to get really complicated very quickly with all the different types of units, weapons, armor, vehicles, etc available in WW2. However, Memoir keeps it pretty basic, making it easy to learn, easy to set up, and quick to play, which are all reasons I love the game so much.
I also really like more complex “simulation” type games, but don’t have the time to learn, setup and play games like these, so Memoir for the win!

Thanks for the feedback.
Good to know the rules regarding the dice - much appreciated.
I totally agree about MM44 keeping it simple - a ‘beer & pretzels’ game as the guy who introduced me to it called it!
Having said that, I think there is scope for making it more complicated if you want to - with the Command Cards, air pack, extra terrain, etc.

Very true! If you add in all the different types of units, all the terrain, command cards, New Flight Plan, etc, etc. it can get more then a bit complex.
But I love how all the rules build on the basics. If you know infantry rules, you’ll be able to easily figure out other infantry types. Same for armor, same for artillery. Terrain as well… All this is why I keep the game simple to introduce it, then once I get people interested I can show them the depth of the game with the different units, terrain, and scenarios. It’s worked pretty well in building a local fan base so far

Coming back to this topic after a while, I have just finished painting a couple of interesting sets from Zvezda. 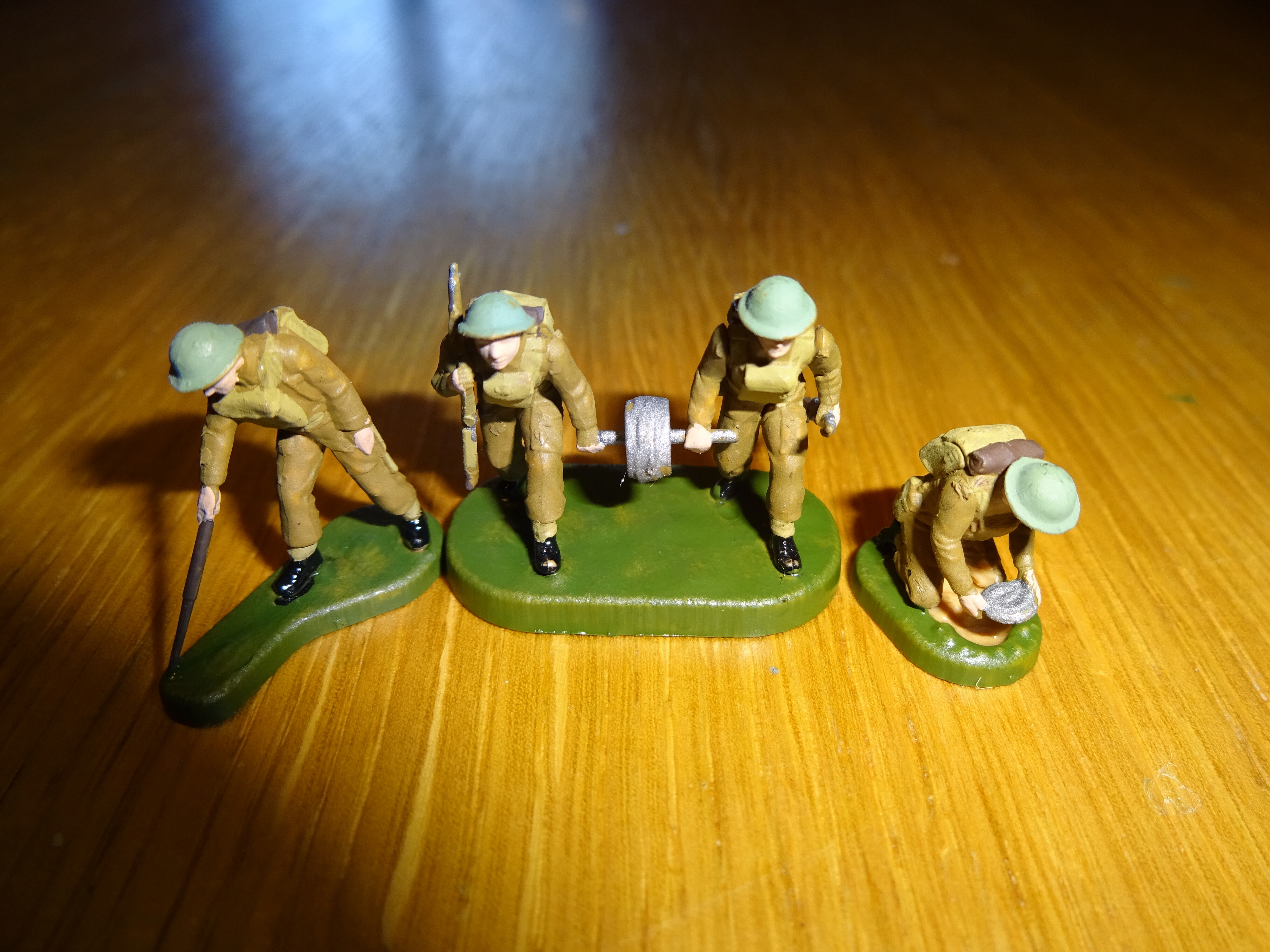 Although difficult to assemble, they produce a great group of engineers who could probably be used in a scenario. 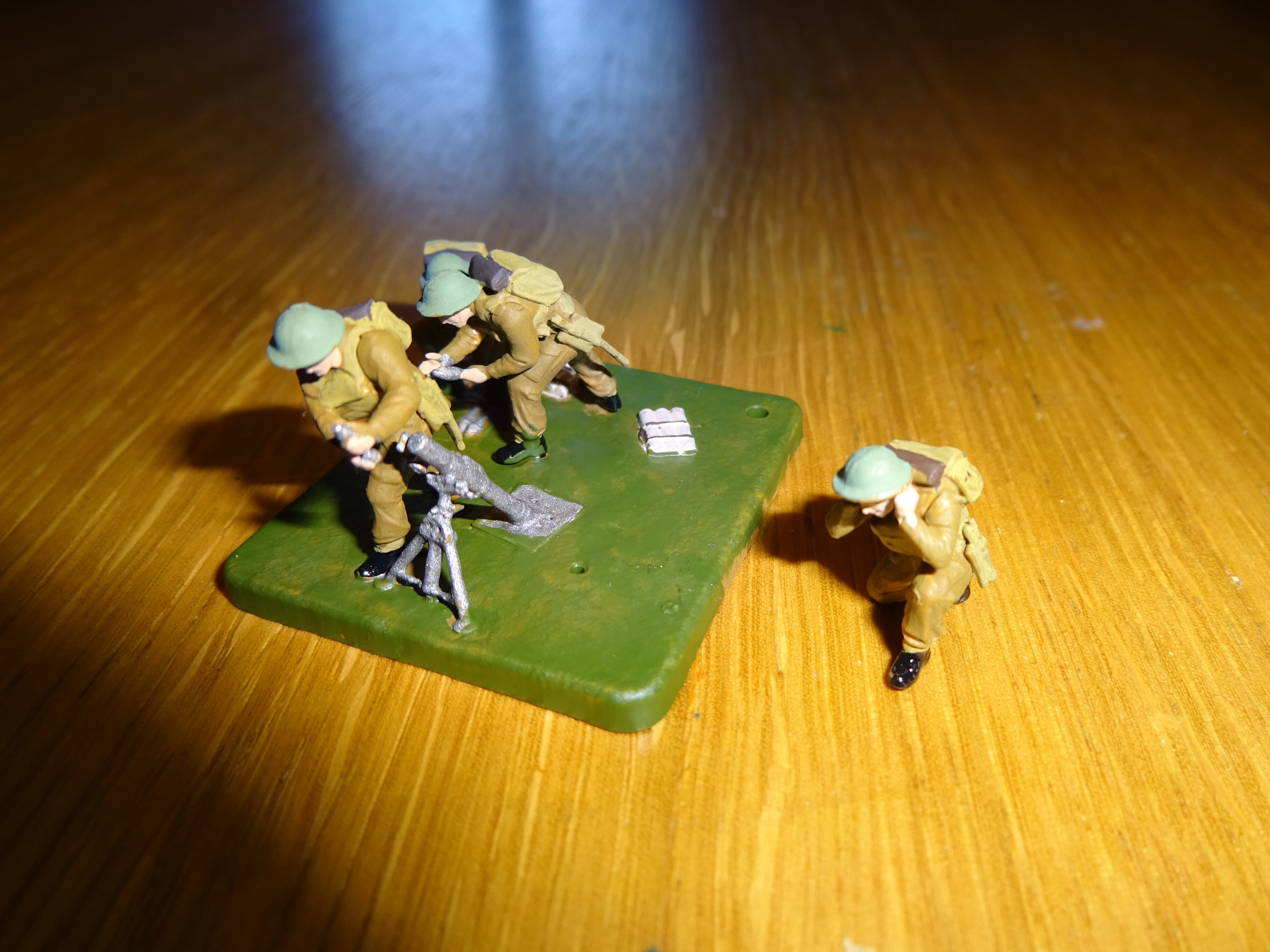 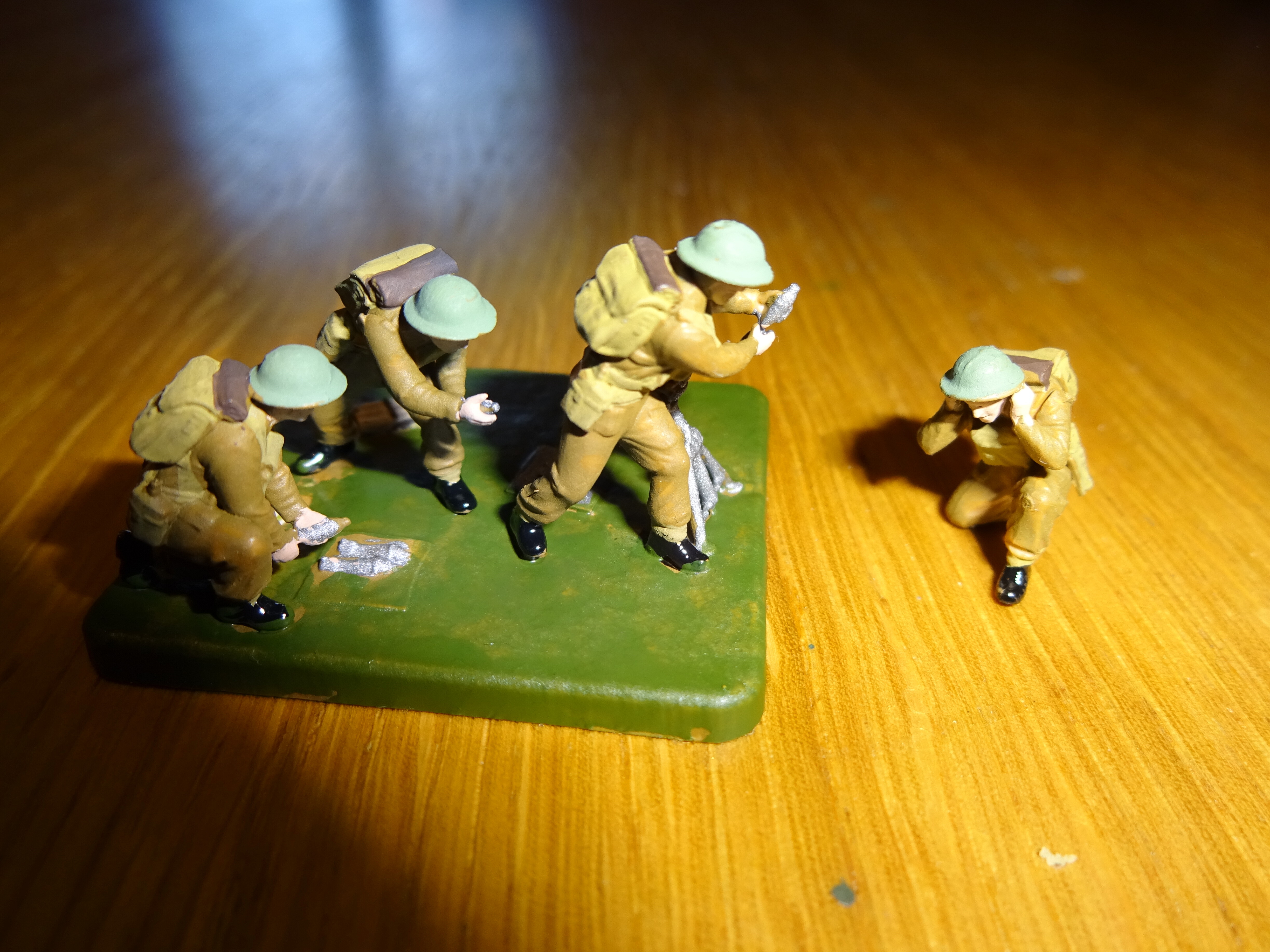 Not quite as tricky to assemble, and they could certainly be used in a scenario because each can be detached from the shared base (I have taken the fourth figure from the base to show this).

Zvezda make very high standard models. The only apparent* fault is that the mortar team is clearly early war (because of the uniform and personal equipment - which is why the engineers are only 1939-42).

Nice paint job! Those are excellent engineer minis. Hpw do they compare in size to standard memoir infantry?

Thanks, glad you like them.
I forgot to say that they are both 1/72 scale, so perfect for MM44.

I have been working on some more of the excellent Zvezda sets.
First up is the German Sniper Team.
They have individual bases, which is probably best for M44, but I decided to put them all on one: 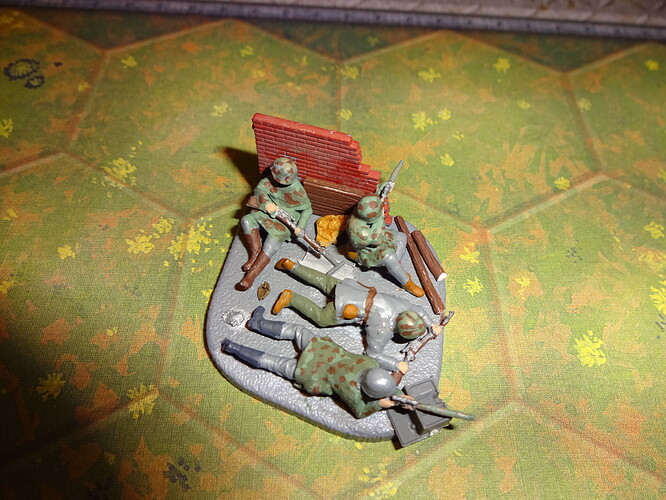 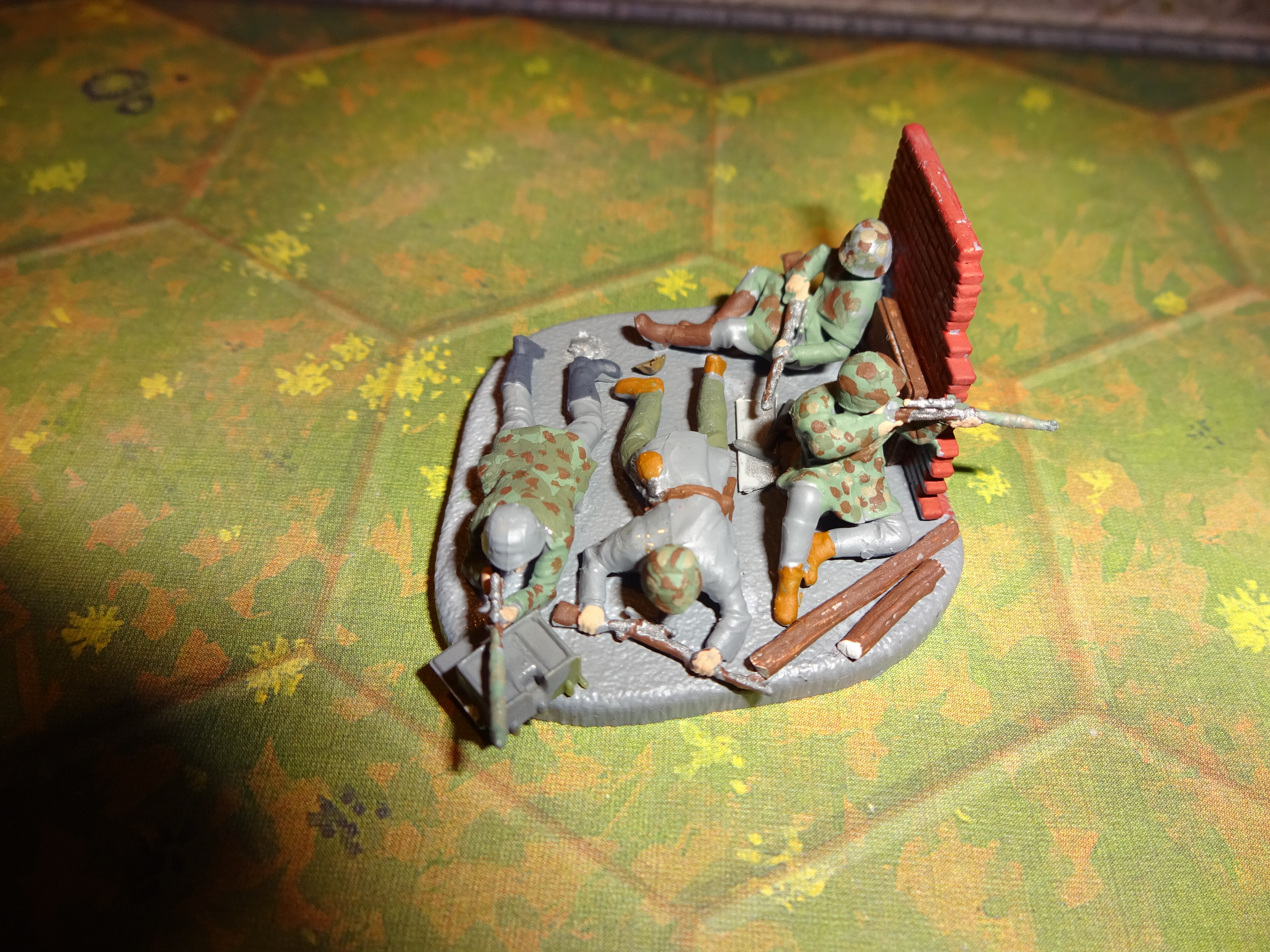 Another Zvezda set - German Sturmpioniere 1939-42.
A frustrating one to assemble - both mine detectors broke.
But they come with some nice accessories - such as the barbed wire, which I now use in MM44 scenarios. 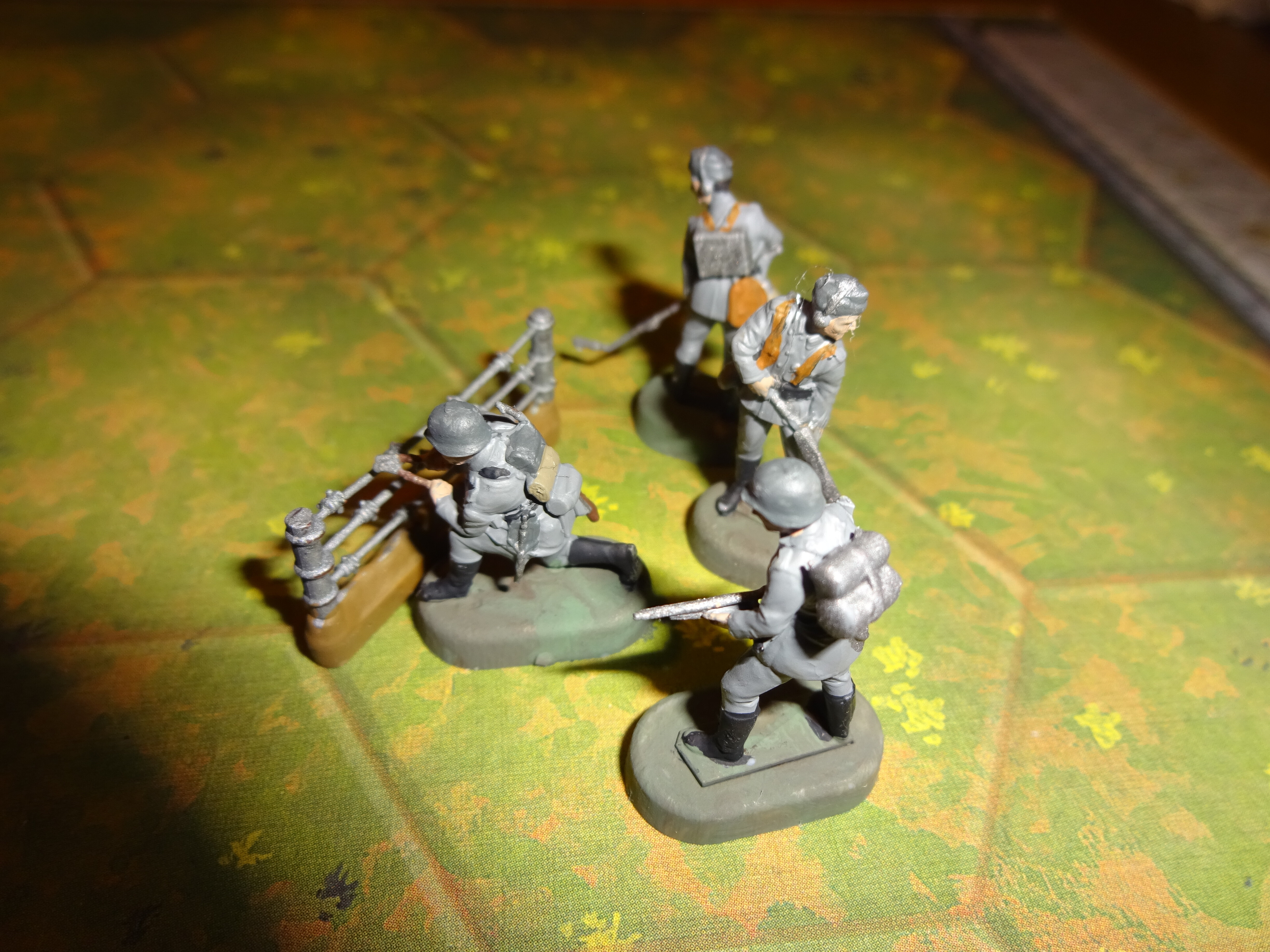 I mentioned above that, like all similar Zvezda sets, the sniper figures have individual bases as well as a combined one.
I have painted these bases and can now use them with whatever figures I want to, swapping the figures for each scenario. 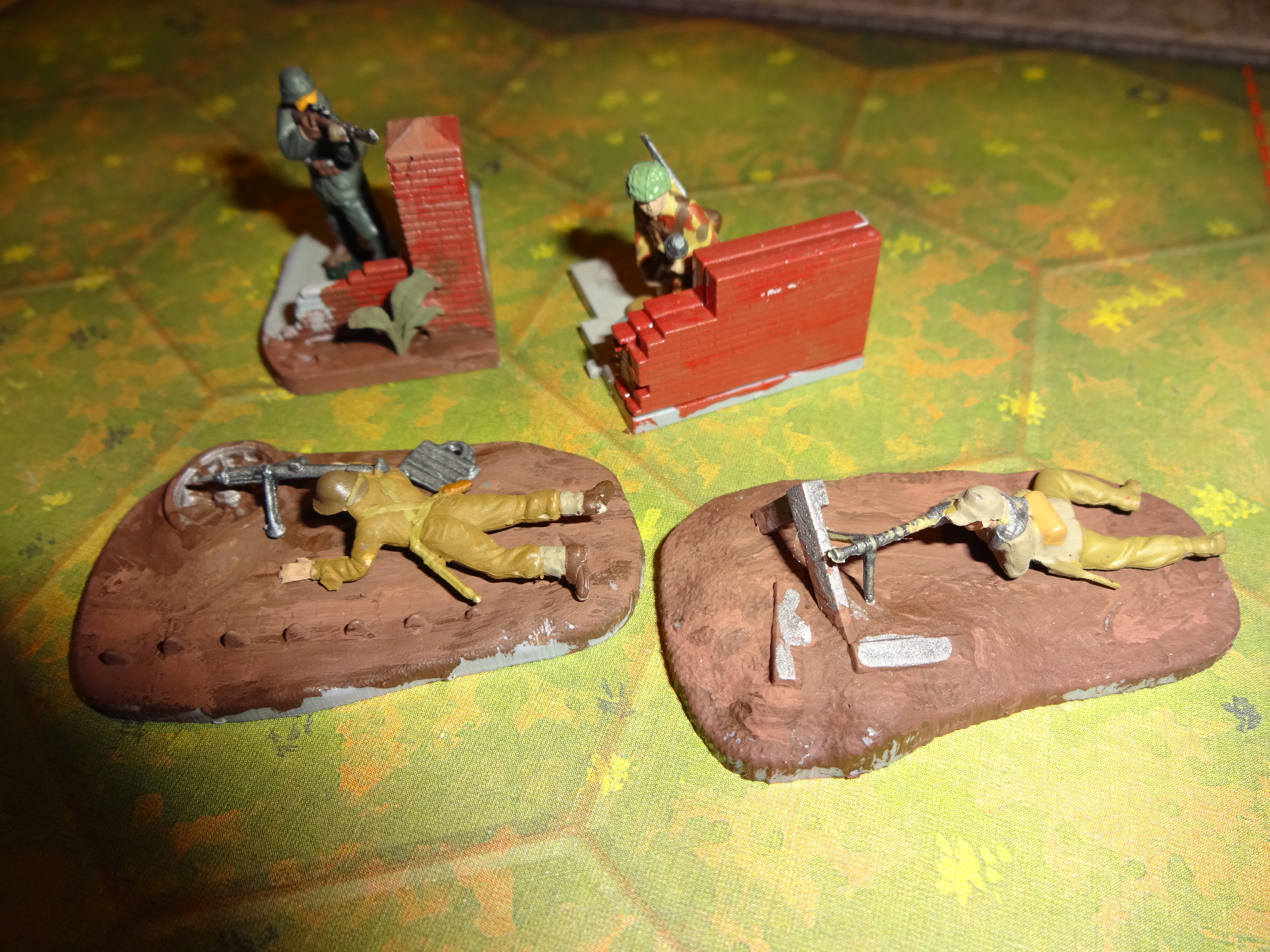 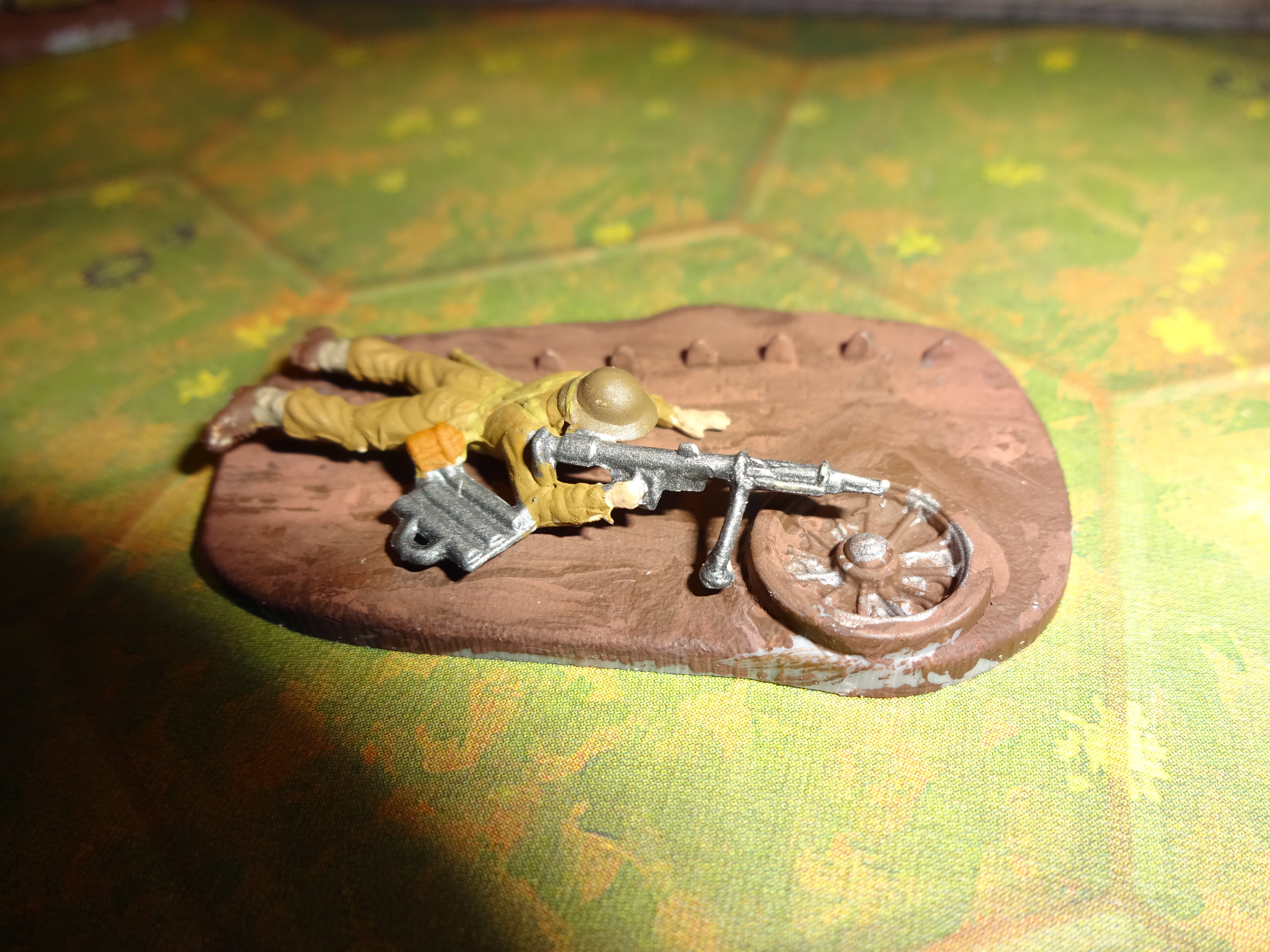 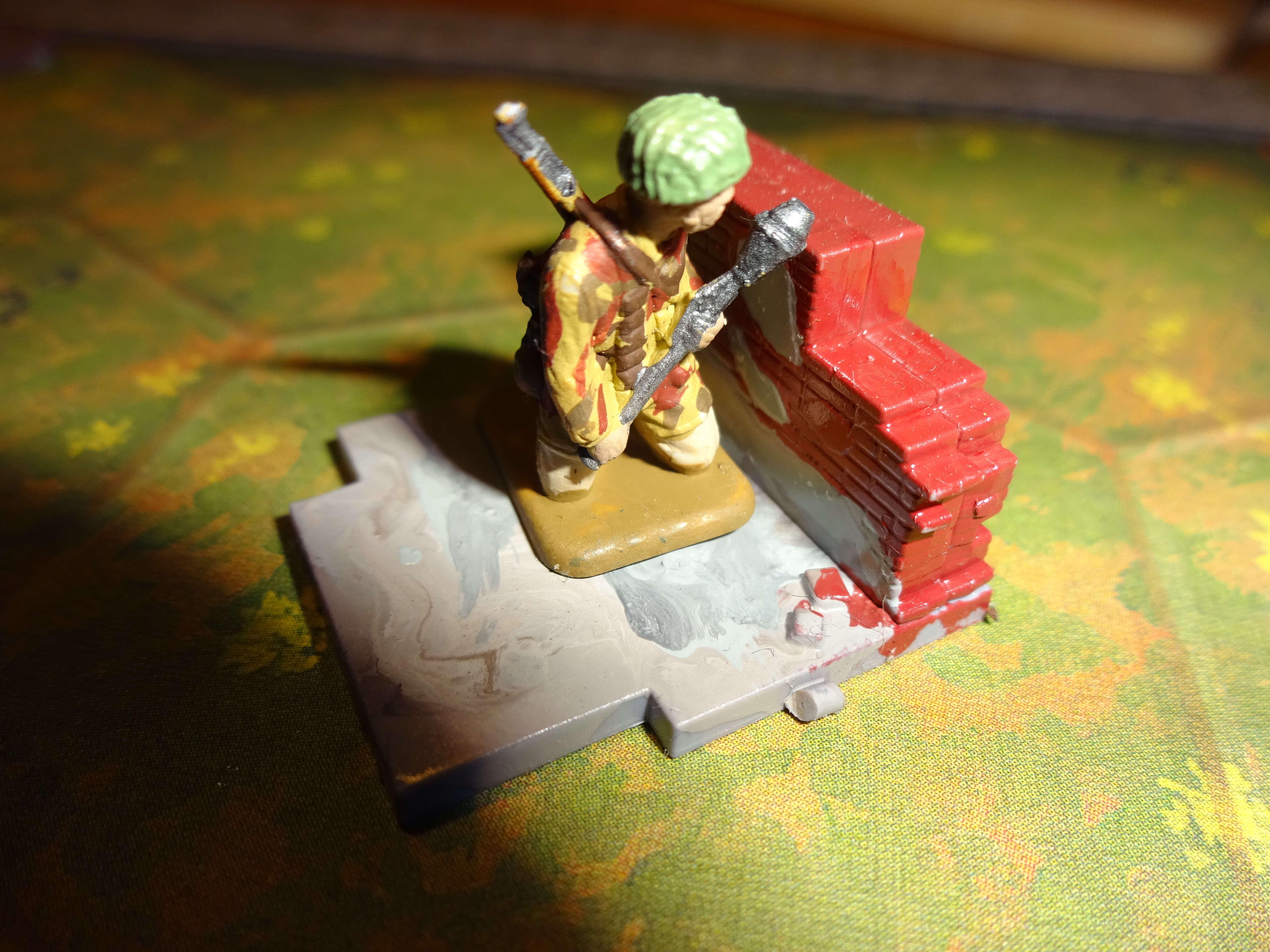 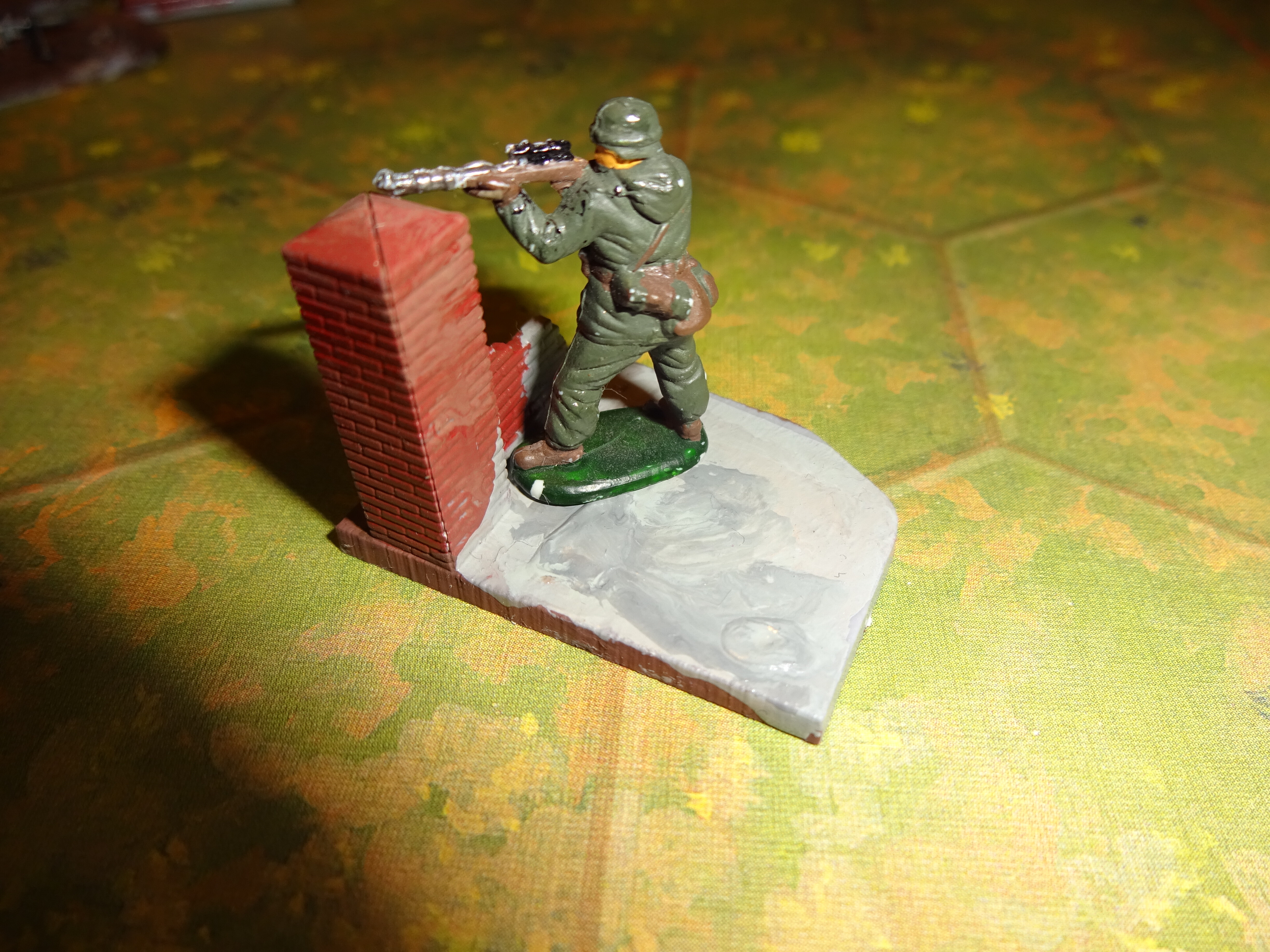 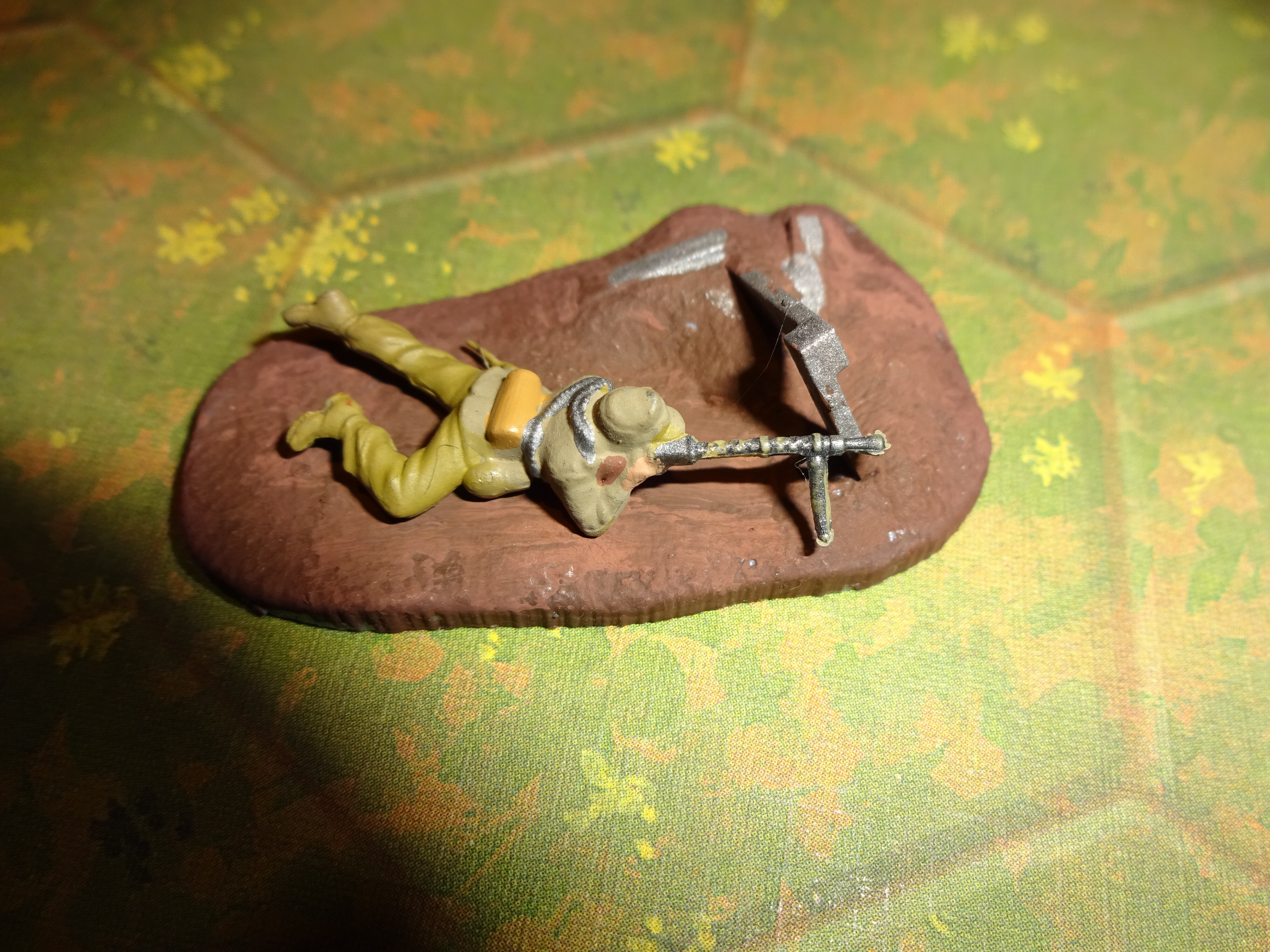 Headquarters figures
These might have limited use is MM44, but they are quite fun anyway (all Zvezda).
Soviet headquarters winter uniform: 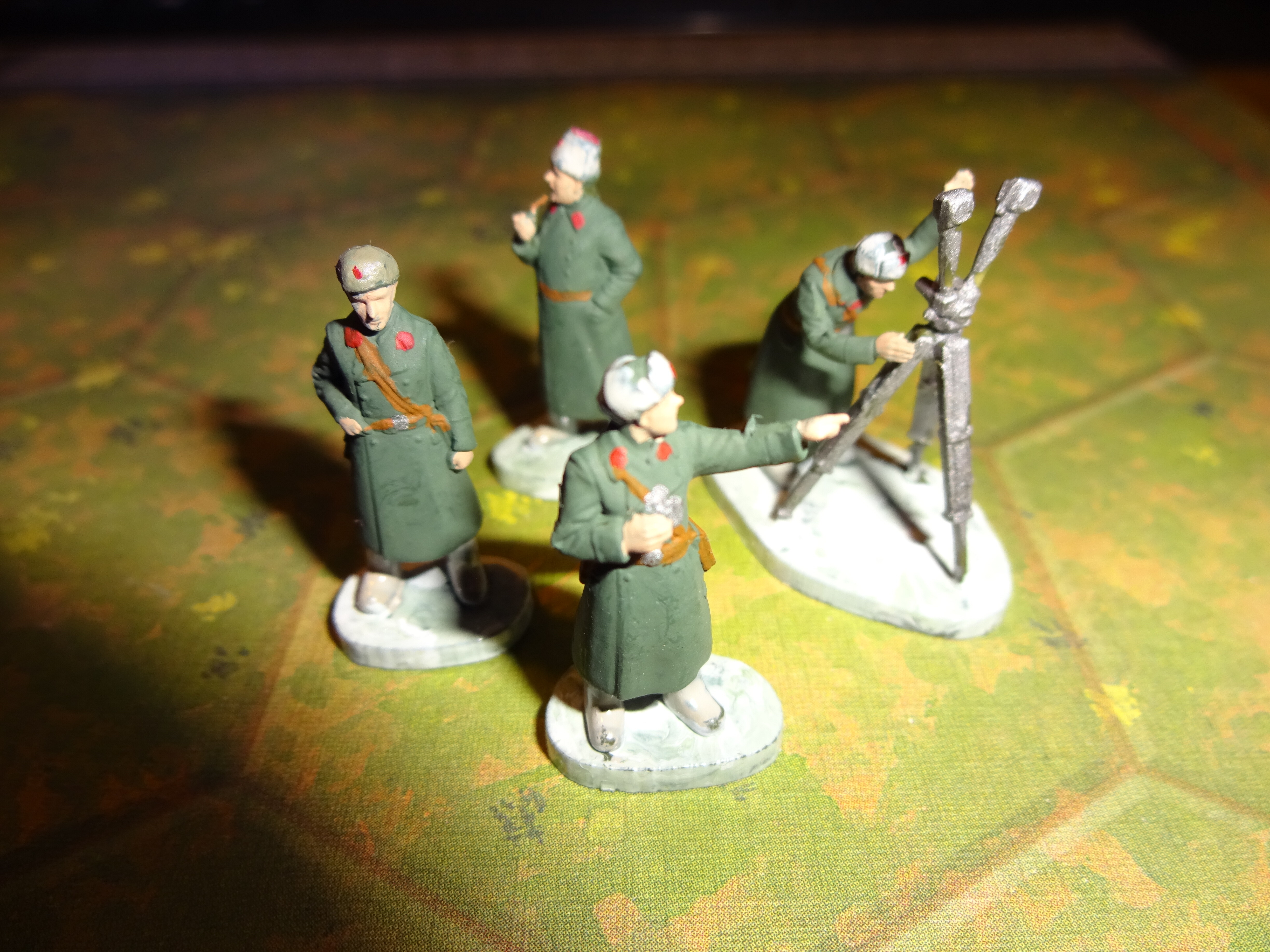 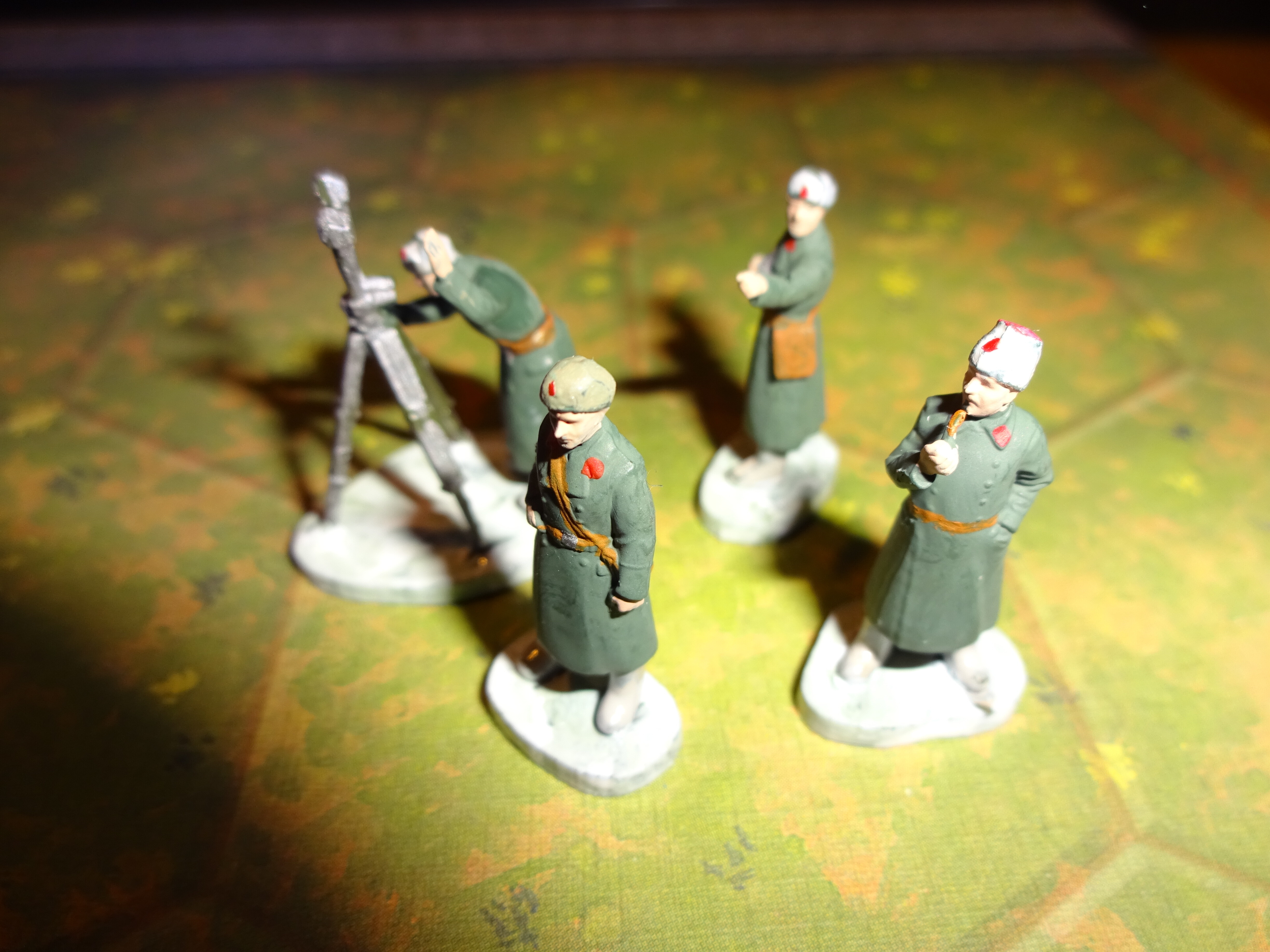 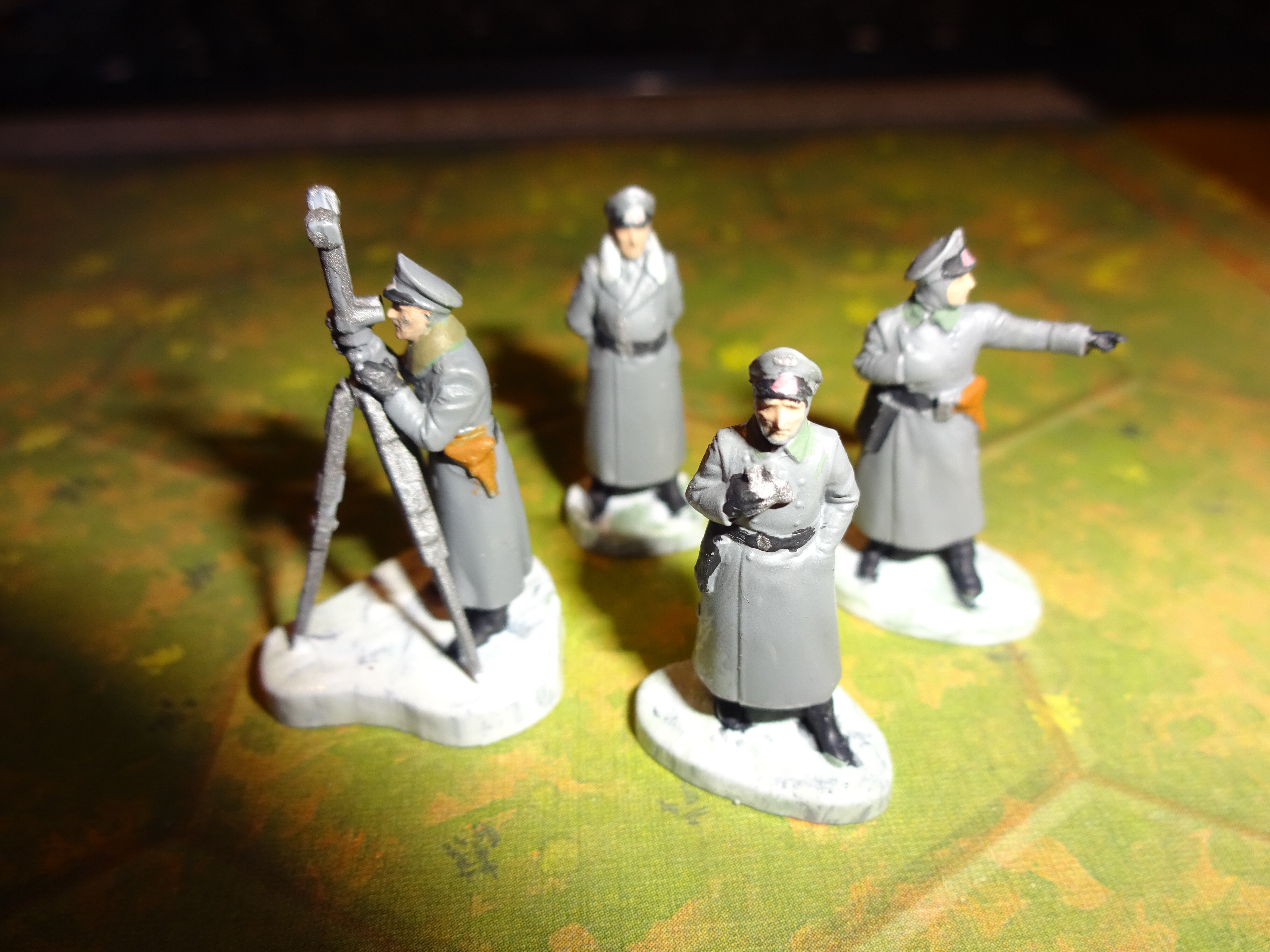 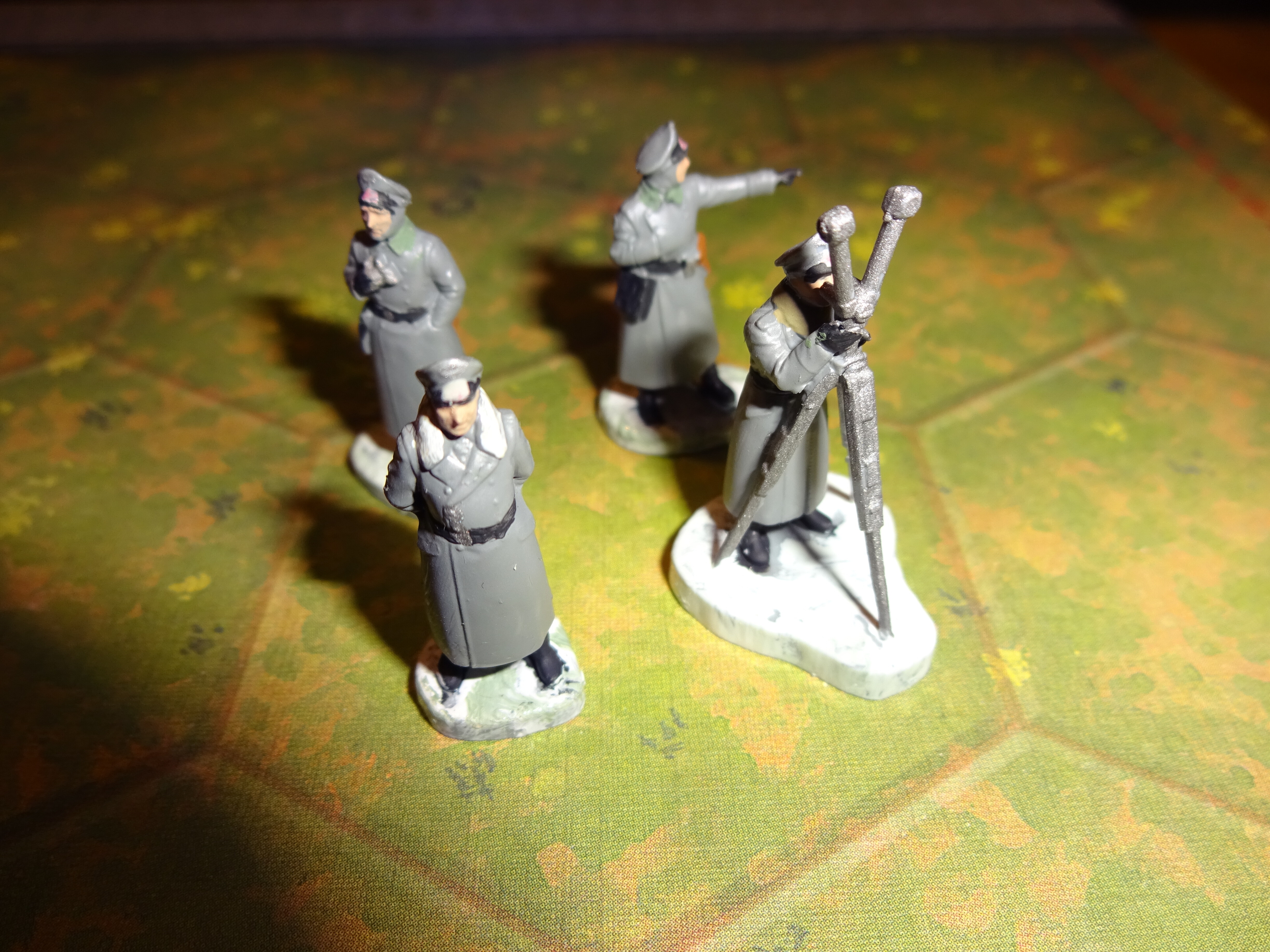 And Germans in summer: 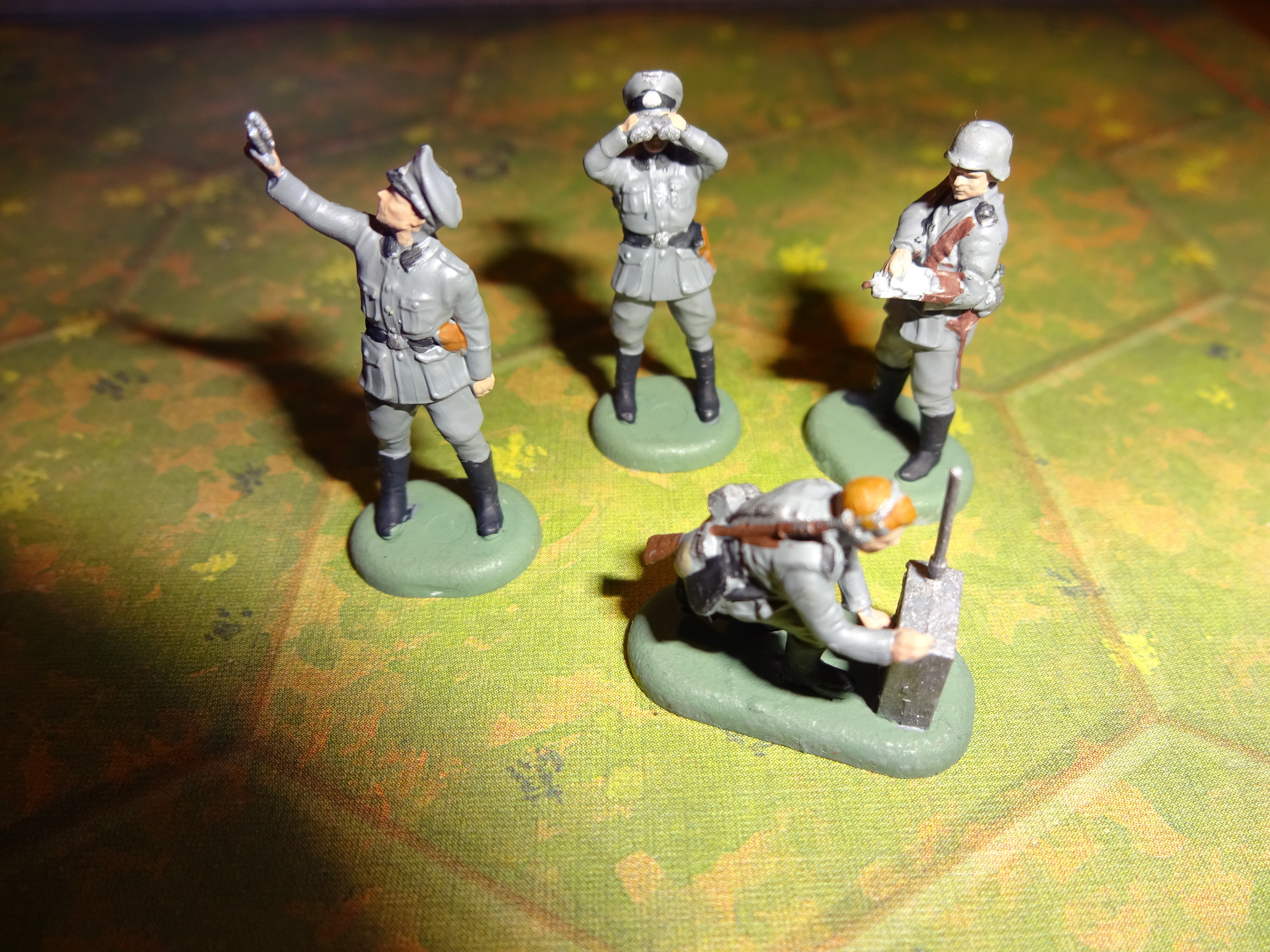 Stunning figures, so detailed and well painted! Lots of care and love was put into this.
Watching these posts always makes me want to buy minis