The first scenario in the Base Game is Pegasus Bridge. A good choice – easy to set up, straightforward, and relatively quick to play. An ideal way to start the MM44 experience.

It is also a fascinating story. Part of Operation Tonga, it was the first Allied victory on D-Day. There were some interesting characters involved, including the famous German tank commander Hans von Luck (who could have defeated the British if given permission to do so earlier), Lord Lovat (who led the commandos to relieve the Bridge and apologised for being two-and-half minutes late!), Major John Howard (who lead the initial raid), and the actor Richard Todd (who parachuted in to help relieve the Bridge, met Howard on the Bridge, and later portrayed him in The Longest Day in 1965!).
So, I have always been keen on this event (I have been to the Bridge itself) and wanted to see if there were any other scenarios for it. There are, but I wasn’t expecting to find 17 of them on the Days of Wonder webpage!

And herein lies a couple of problems (or rather questions) – are there too many scenarios available on line, and which are the best?
UPDATE: And, having looked in more detail at this particular battle, how accurate are they?* (*See comments below the spreadsheet)

Let me say that I have never created my own scenarios, and I totally respect and thank those who have. But, some of them just seem to be slight variations on existing ones, or even just blatant copies.

So, to summarize the Pegasus Bridge scenarios, there are basically three different ones:
11 of them are the Base Game, or variants of it;
5 are Reinforcements for / Counter Attack on Pegasus Bridge, with a different map from the Base Game;
and 1 is a completely different scenario with no specific name and no rules! (I have come across this before – someone makes their own scenario and simply adds ‘‘My victory conditions’’ ‘‘My rules’’.) With a bit of imagination though, one could probably play it.

The next issue – how to organise these 17 scenarios? One of the difficulties is that many of them are just called Pegasus Bridge, with no differentiation from each other. So I created a spreadsheet based on the three scenario variations (above), listed in date order (date of creation by the author).

Hoping to try out one or two this weekend… 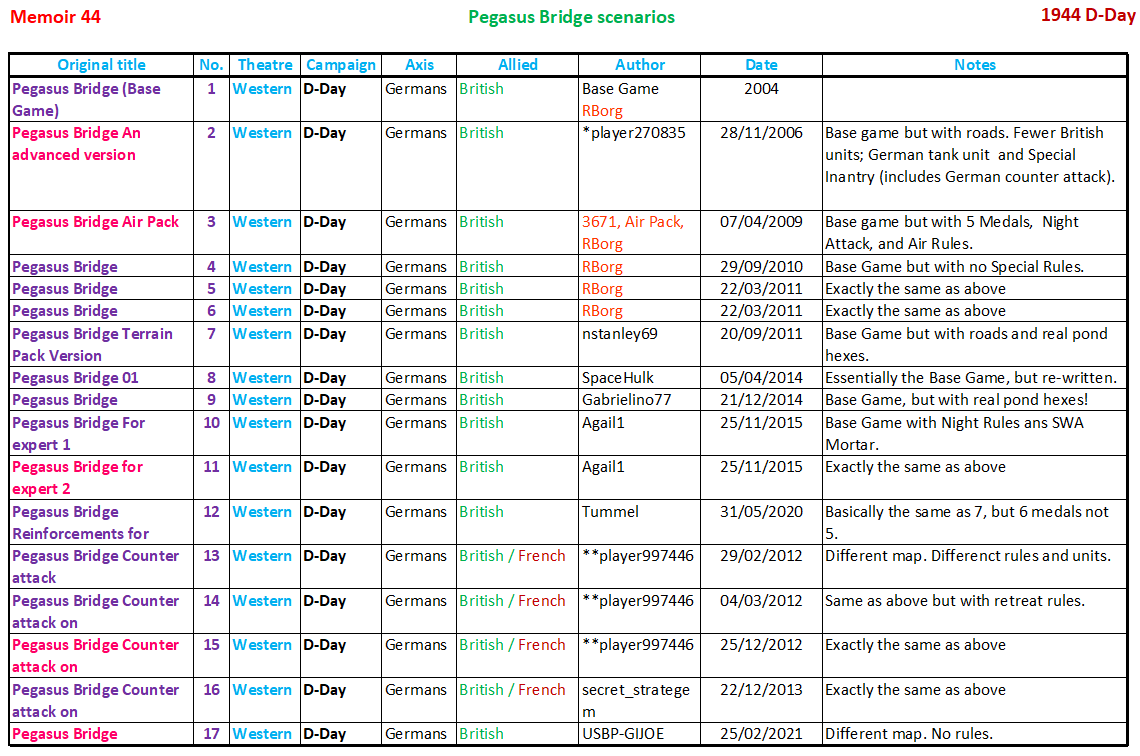 Having looked at this scenario and the actual battle in more detail, here are some issues:
The pond on the map is too big; it was small (and mistaken by British intelligence for a drainage ditch). So one hex is enough.
There is no town (hex) at the west end of Pegasus bridge.
The gliders landed much closer to Pegasus Bridge.
The gliders attacking the Orne Bridge landed north of the road and bridge.
The map is too big – the bridges are only 600 m apart!
There were almost no trees in reality.
There is no evidence of M. Gondree (the cafe owner) being involved in any action - he stayed in his cellar with his family. So the French Resistance element here seems to be nonsense.
The battle was over in minutes. Of the 181 men ‘D’ Company involved in the capture of the bridges, 2 were killed and 14 wounded. Casualties were much higher in the defence of the bridges during the following day.

What stops you from playing? (and how can we resolve that?)