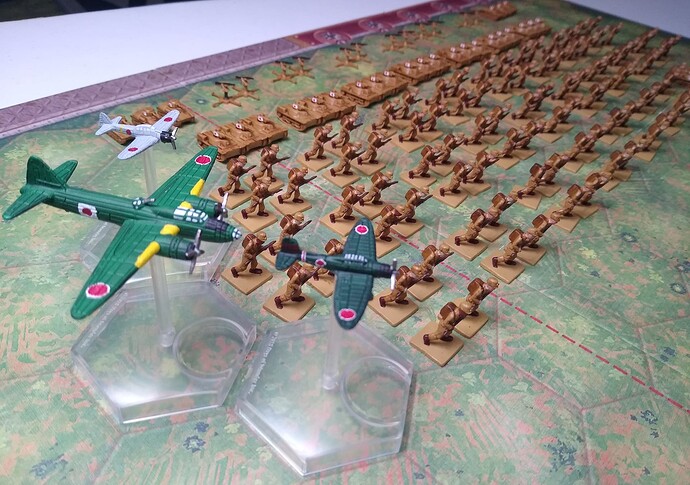 IMG_20211215_0229489061920×1352 251 KB
Thought I’d share my current paint project and update as I move along. I decided to start with the Japanese, or, what I consider the worst looking unpainted figures in the game! I want to keep things simple as this is such a large project, but I’m also open to adding more detailing later. I started working on the American units last night, and will hopefully get those done by 2022 in time for a good Guadalcanal Overlord.
3 Likes
mzungu December 15, 2021, 4:35pm #2

Great job! I find that playing with painted miniatures enhances the entire gaming experience for me. Here is an image of one of my games ending with a shoot down of Japanese bomber by a Corsair. 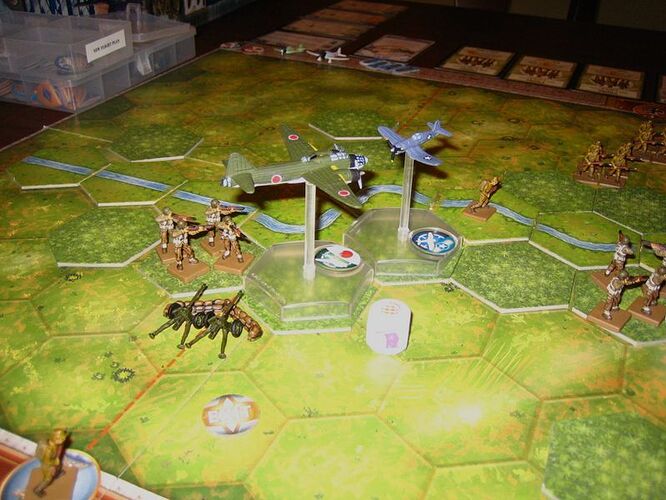 Yeah playing unpainted is fine, but they have a bit more personality with skin tones. The planes look 100x better painted though. Thanks for an idea for the US units, I wasn’t sure what scheme to go with there!

I generally used this paint scheme to paint my Americans: 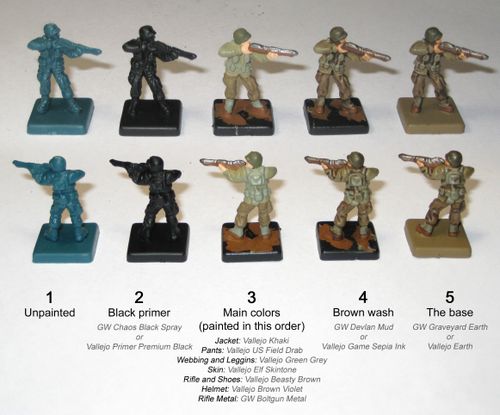 I also applied a wash after my base coating and sealed mine with TESTORS Dullcote.

Excellent job.
Thanks for the colour listing - I will have to look into them.
I have painted many miniatures over the last couple of years, but (being a Brit) I have not really shown much interest in the Pacific theatre.
Recently though I have acquired the highly-rated Matchbox Japanese Infantry and already have a variety of US Marine/Infantry sets, so I will have to make amends and get to work on them!

Looks great.
I have never seen the Japanese MM44 figures before - and glad I didn’t buy them!
If you want to spice up the appearance of your battles then you could try some of the great 1/72 figures on the market.
As I mention to mzungu, the Matchbox Japanese Infantry is excellent (surprisingly, because most of their stuff is average). However, they are difficult to find, so something like the very good Revell Japanese Infantry set might be easier to get hold of.
The only problem with buying such sets is that there are often a few figures in a prone position, which are not practical for MM44 hexes (unless it is a sniper).
Looking forward to seeing your finished Americans!

I was looking at the figures you’ve done and that would make a really interesting looking board setup with all of the variety in models. I love that they’re done in historical uniforms of the period.

I was just looking at the French Army figures in the M44 Equipment Pack and it looks like they opted for WWI uniforms. Tempted to paint them as such, it was a good looking color scheme.

I read somewhere recently that the French went to war in 1939 dressed like in 1914, and in 1914 they went to war dressed like in the 19th century!
There is an element of truth in it - they spent so much money on the Maginot Line and tanks, including those enormous Char 2s, but neglected their infantry uniforms.

For a moment I thought they were shirtless

Thank you, haha that would be a twist. Initially my plan was to match all units with historical color schemes, which would’ve resulted in a pale green Japanese uniform as opposed to a brown washed yellow, but my only complaint from beginners in Overlord play has been units being too similar in color. (I was surprised by that complaint, but it has happened on three occasions, so there must be something to it with at least the base set)

It’s really going to be obvious when I do the Soviet Red Army, which may live up to it’s name. Still on the fence about that one.

Yes I have had that happen to me too. With unpainted minis, british and japanese are a similar color.

What I do when painting, if two armies would end looking similar, apart of trying to differentiate the colors of the uniforms or details, is to make their base different colors. US got green, Germans got dark blue, and so on (I just painted those two for now). I guess Brits would get sand colored bases, Japanese, maybe a more vivid green because of jungle ? , Soviets maybe gray (Im thinking about concrete) or brownish-red.

I’m trying to avoid people getting confused as much as I can.

One thing you may notice about the AXIS figures (Germans / Japanese) in Memoir’44 is that they are at least a head shorter than ALL the ALLIED armies. They also are proportionally smaller in body size. So visually the larger troops are always the ALLIES. I don’t know if this was intentional or not but it is noticeable.

This is a common problem with scale model figures, even within the same manufacturer.
Here is a great comparison page from Plastic Soldier Review.

Sealing/varnishing is absolutely vital.
I never used to do it, but then of course my regularly-used figures began to lose paint.
So I learnt the hard way and now I use Tamiya XF-86 Flat Clear.