Topic for after action battle reports: feel free to comment your experience with this scenario! 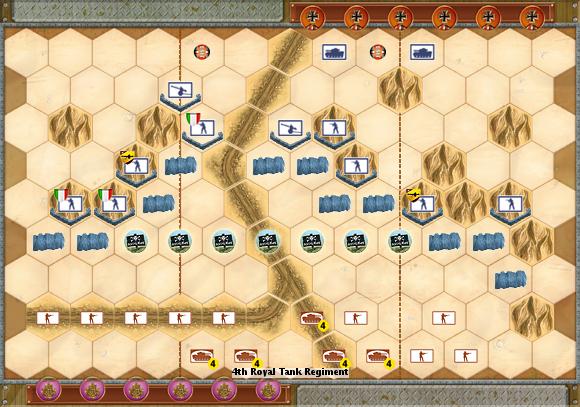 Having recently acquired a used Winter/Desert board, I set out to battle a few scenarios with my usual opponent @guilherme as we opened up the booklet of Mediterranean Theatre scenarios. We got to try out minefields, infantry with rocket launchers, exit markers and Italian forces, all for the first time!

The first game I went as Axis and got lucky with cards and my opponent lost quite a few figures in minefields, and the game ended 6-0 for the Axis: 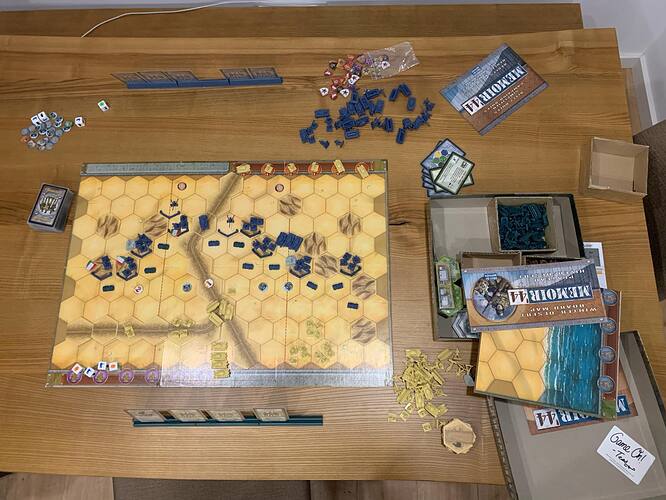 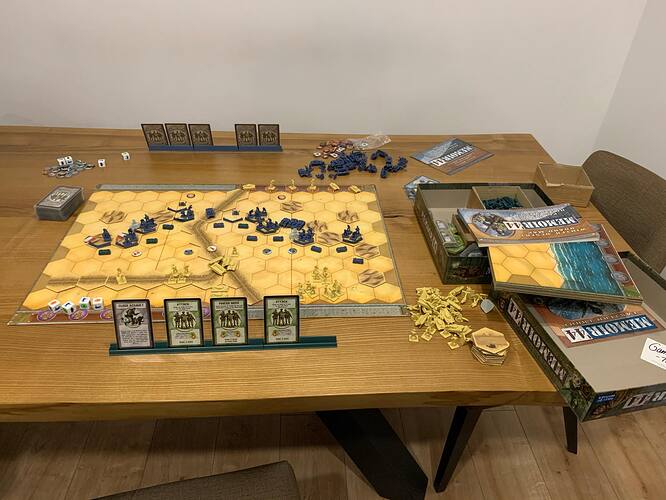 In this first game, the Axis blocked the only road leading to the exit markers, and the British were constantly held back by the minefields, advancing at times with a single unit forwards. The axis draw good cards and had even better luck with the dice, and everything the British sent was picked off individually. No units made it to the Exit markers.

We also started switching sides in order to see the scenario from the other army’s perspective, and I think we’ll keep doing this. I can’t stress enough how this setup is terrible for the British, which is only aggravated with the Blitz rules which say that armor on the Allied side cannot advance more than 2 hexes!

Here are some photos of the second instance of the battle: 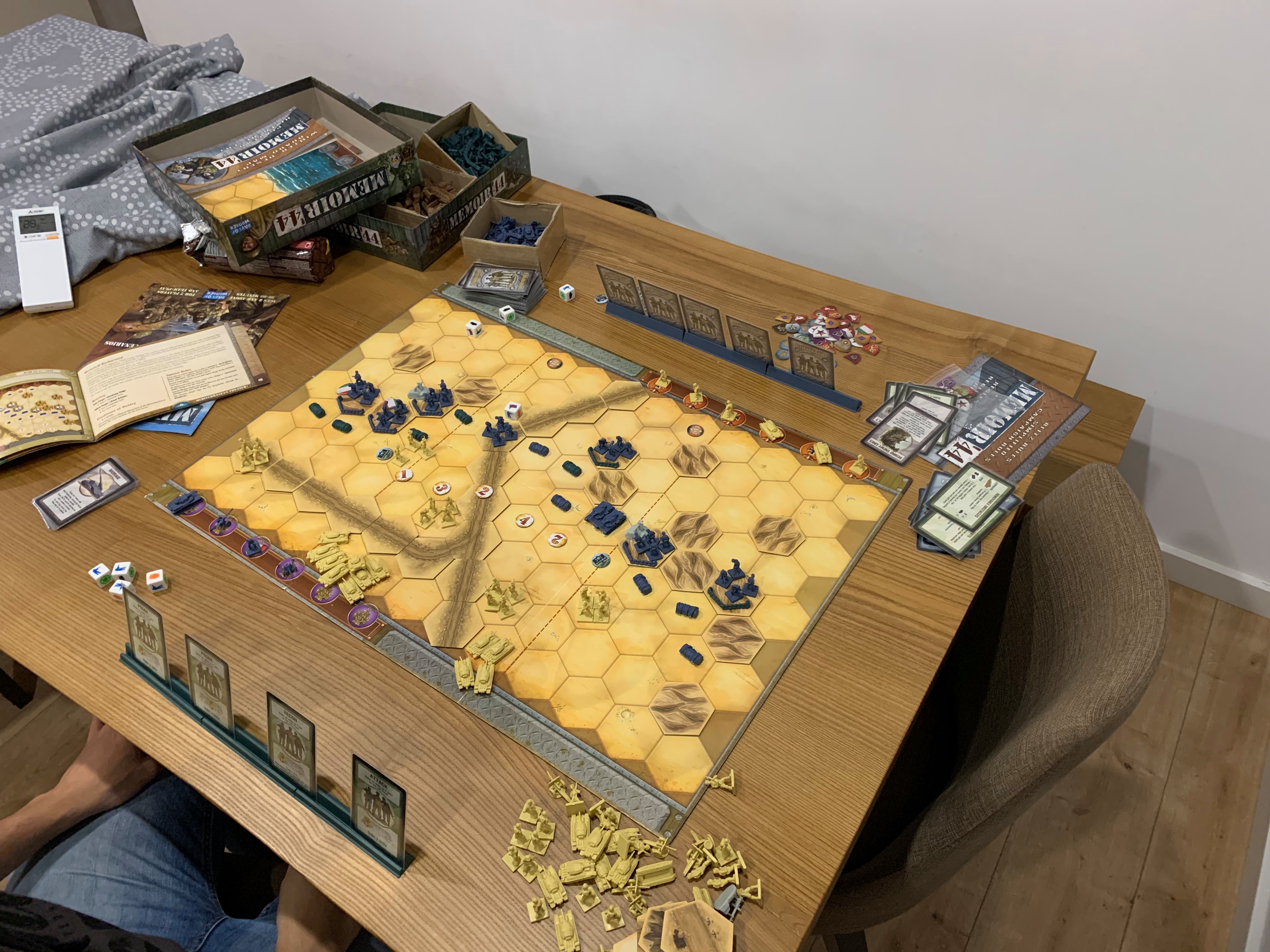 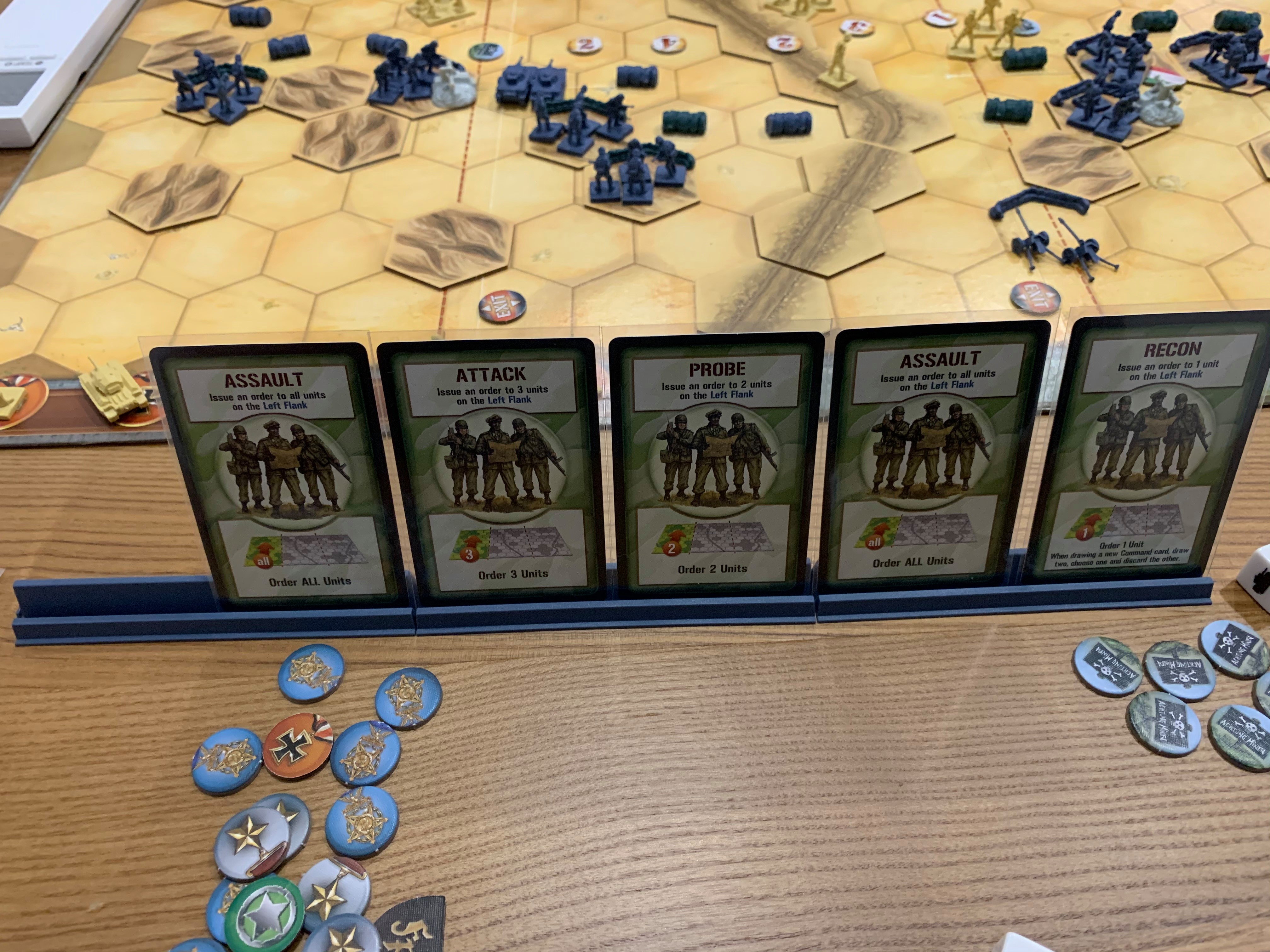 The second battle was still won 6-4 to the Axis, but this time the British were lucky to get Their Finest Hour and Bombardment, which was able to secure 2 medals. However, the mines along the road were harrowing, with no decoys to be seen! What frustrated the German command was the unlucky draw of only left flank cards, which were powerless to stop some British units from advancing almost to the Exit markers. At the last moment, a Direct From Headquarters card was drawn, giving the Axis player 4 orders to attack in the middle section, securing 3 medals from already weakened British forces!

I’m curious to know whether the other scenarios in this pack are more balanced or not (for either side). I think this was a first with being so unbalanced (I concede that I may have played less than 10 scenarios overall).

I felt roads also add some new dynamics, since both of us basically just went through them. Would it be worth to try and move into other parts of the map to avoid feeling like going through a cliff? I wonder whether that’ll be the case with the next Mediterranean scenarios…

The Winter/Desert board comes with a small booklet about Campaign Rules, and I’m also wondering how big of an impact it will have by playing all scenarios in order.

Speaking of which, we need to schedule our next Memoir '44 event

Today I got to play a scenario which I had already posted a battle report for: Hellfire Pass. This scenario is brutal for the British Commonwealth and today I wanted to revisit it (and others in Mediterranean Theatre) with the Desert Combat Cards.

I have to say that the Combat Cards make a significant difference in my opinion, especially in a scenario so unbalanced like this one. Having the ability to interrupt your opponent and block their movement, give more orders than usual or fortify hexes with armored units has great potential to spicup up battles further than what the base deck allows, more so in unbalanced scenarios. It’s not like the scenario stops being unbalanced, but the player playing the losing side feels like they can do more with their units other than just let the play out.

I played as the British, and despite having drawn a Their Finest Hour card, the Axis got 2 assault cards for “All units in the middle section” as well as a Direct from HQ card, which was devastating. My wife was happy for winning though!

Here are some pictures: 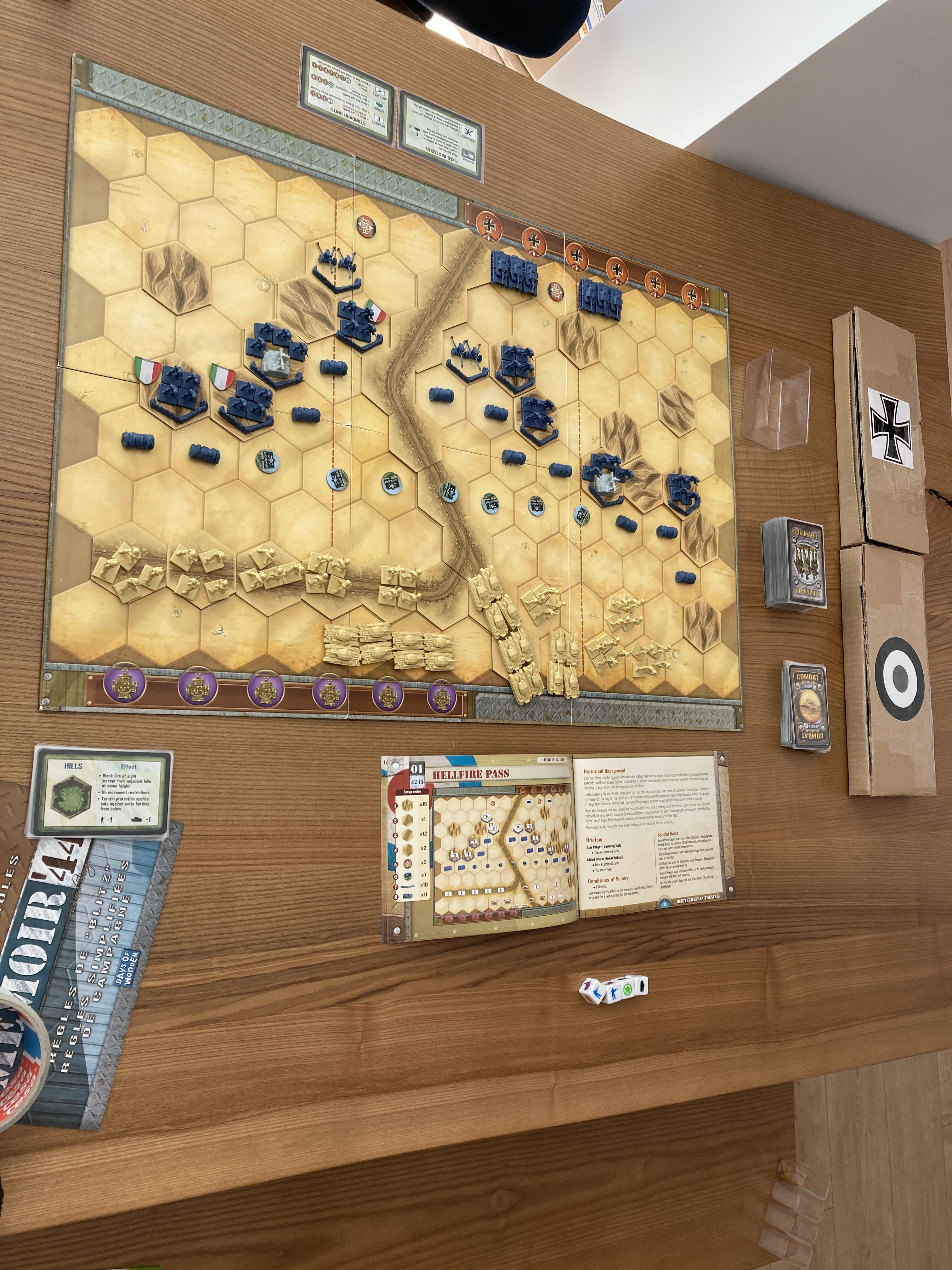 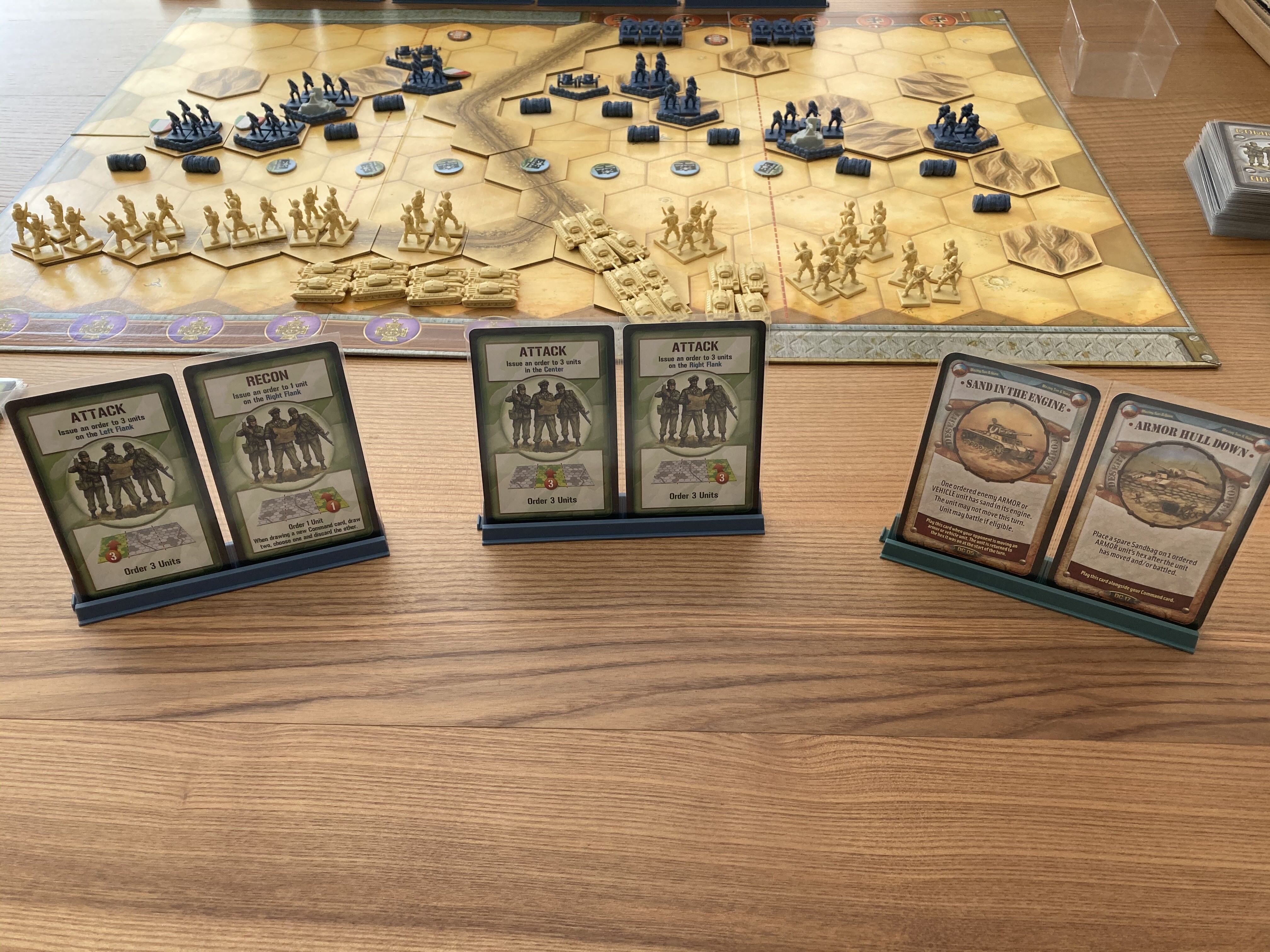 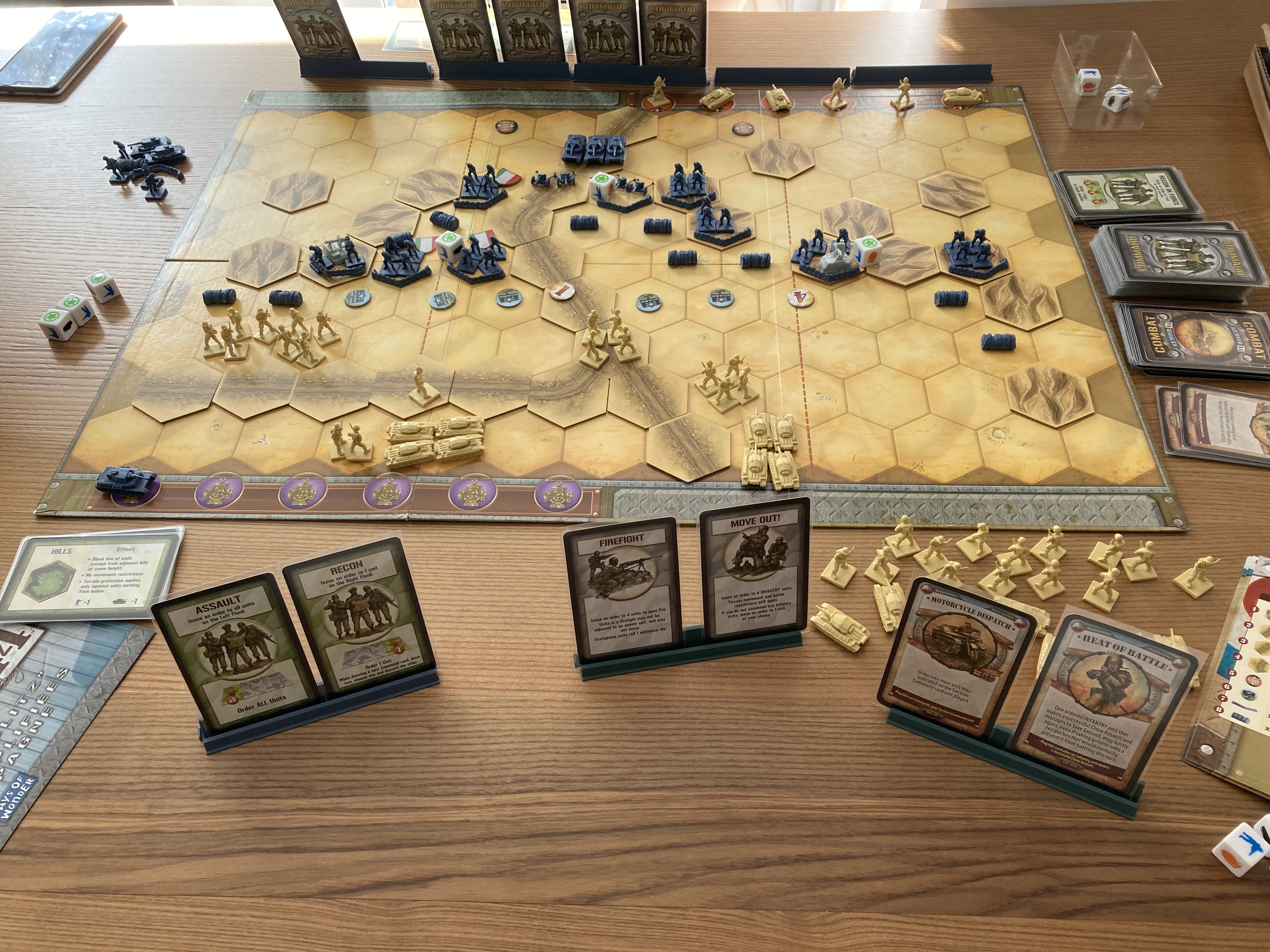 I find it a bit unusual that you state the game is brutal for the Allies. According to the After Action Reports (AAR) on this scenario with 430 play throughs, the Allies win 53% of the time and the AXIS 47% of the time. So it is a relatively balanced scenario with actually a slight nod to the Allies.

It may be that your particular experience has been brutal, and of course anyone who plays a lot knows that that can be the case depending on your opponents skill level and your own.

I have four reported AAR myself and have no reported wins as the Axis,.
See reference for AAR:
https://www.daysofwonder.com/memoir44/en/battles/?id=4245

I have played the scenario 3 times total, and the axis won by a landslide every time! I’m sure this is a skill issue, but it might also be unlucky draws

Maybe I should switch my strategy. Perhaps I focused too much in firefights, since traveling across the road is too hard due to the minefields. Every unit must stop and roll for mines before passing.

I cannot imagine a game in this scenario where you as the Allies would be able to score the 6 required medals through fighting, so maybe I should just focus on moving my troops forward and avoid fighting with infantry to get an additional hex movement. But as you can see through the last photo, a Reposition Combat Card allowed the Axis to cut the road and I, playing the Allies, wasn’t able to pierce through.

Getting medals through exiting the board seems like the only way to win as the Allies then!

Thank you for posting the link to the AAR for this scenario. I always forget about this. Taking the percentages into account, I’ll have to play this one again and see if I can get a win

Here is another play we did in northern Portugal. This one didn’t involve me, I let my wife play with her sister to try out the game! Both of them enjoyed this scenario, which was still a win for the Axis, but much closer than my previous plays: 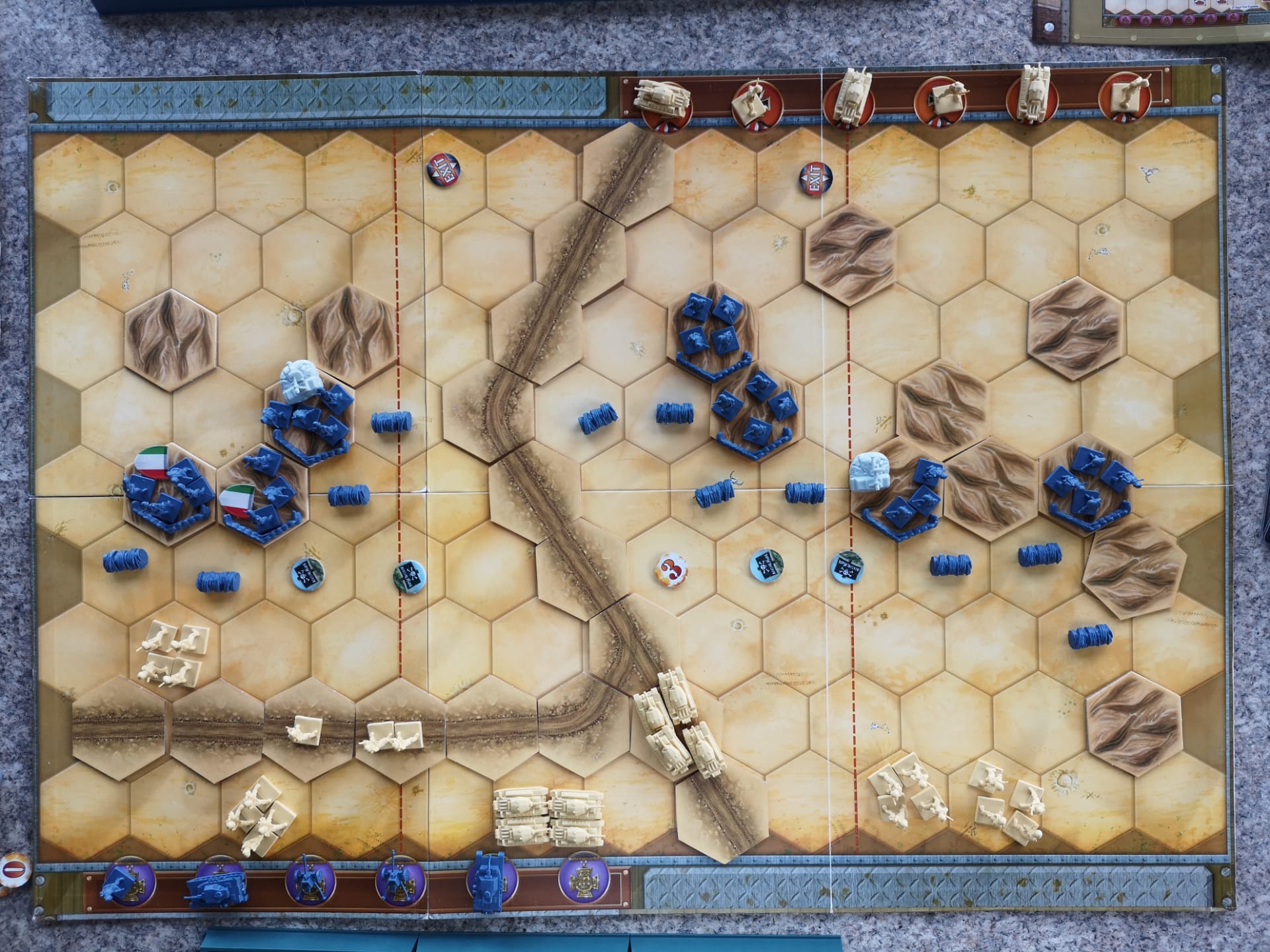 It seems that the strategy applied for the Allies is to go straight down the roadway to the exits.
I think if you keep your distance as Allies, peck away with your armor on the front Axis infantry, you can eventually break through on the Ergs right or left. In this way you avoid artillery fire and eventually outflank the Axis. This has always been my Allied strategy and I have won a few games as the Allies.

This is one of my all time favourites. Certainly can go either way.

I think I initially I also was tempted to blast the middle and aim for an exit, but it’s not a good idea. You can very quickly weaken the Axis front on the left or right with all of the British firepower.