Historical Background:
During the three days called “Les Trois Glorieuses” in France (26-28 August 1940), the main part of French Equatorial Africa (AEF) joined Free France. Only Gabon stayed on Vichy’s side, but because of its strategic location in the middle of AEF, the Free French decided they would have to force Gabon to join them. Two military columns, including one reinforced with light tanks, were sent through the trails of the equatorial forest towards Libreville. These columns struggled to advance in the jungle, making slow progress, so colonel Leclerc ordered a landing of some troops of the Foreign Legion. On 8 November, legionnaires of the 13th DBLE landed in the mangrove of Point Mondah. Fratricide fighting between Free French troops and Vichy’s troops ensued for the capture of the airfield north of Libreville. Once the airfield was in the hands of Free French troops, Vichy forces capitulated in Port-Gentil on 12 November and Gabon finally joined Free France.
Briefing:
Axis 5 cards; Allies 5 cards - move first
Conditions of Victory:
5 medals. The main hex of the Airfield is a Temporary Medal Objective for the Allies.
Special Rules:
French Infantry rules (Nations 7) are in effect for both sides. Place a badge on the 5 Allied Elite Infantry Units (Troops 2 - Specialized Units); they are Foreign Legion.
Scenario link

There are some really interesting scenarios available for some of the less known campaigns in the War. This is another great one from JD Rommel, set in Central Africa, with Frenchman v Frenchman!
Having said that, there is a lot to set-up here, which was time-consuming. And given that the game was relatively quick, it is not one we will go rushing back to, despite it being an educational experience about the French side of the War (and a chance to use my Free French Infantry!) 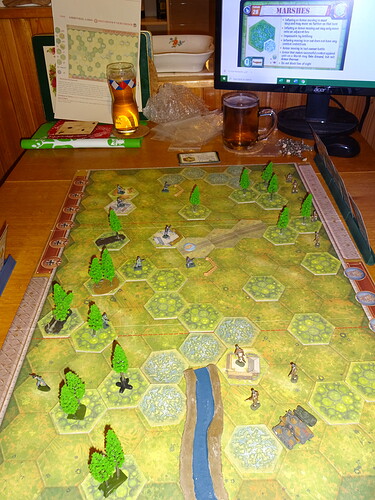 Six victory medals was always going to be tough for the Vichy and, with some unlucky dice throws, it ended up being a whitewash (6-0!). 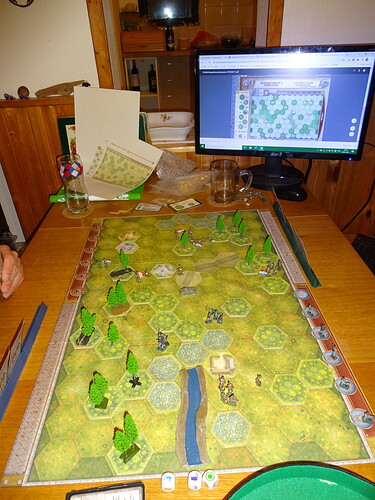