The Winter War - a new campaign for you all!

After a prolonged time away from teaching because of Covid, I am back to work imminently. It has, however, meant I’ve been able to produce one last campaign before I get too busy again!

Below you’ll find the link to my campaign of the Russo-Finnish war of 1939-40.

It’s seven scenarios, including two Breakthrough scenarios. There are victory events, score sheets with objective tracks, ‘What If’ events and hopefully a lot of interesting history too. Also included are special rules for Soviet KV-2 heavy tanks and rules for Molotov cocktails (from the Khalkin-Gol battle map).

A little background taken from the back of the booklet:

When Russia invaded Finland on Novermber 30th 1939, Stalin’s generals suggested it would all be over in a matter of weeks. How could such a small, under armed country possibly hold back the might of the Red Army? The Finns, however would fight on into March 1940.

This campaign will take you through just some of the key events of the war. Some scenarios will recreate the bitter defense of the Mannerheim line and constant counter attacks from the Finnish troops better adapted to the harsh winter. Others will recreate mottis with the Soviet forces trying to hold fast or breakout of the encirclement. The final part of the campaign gives the Soviet player the chance to plough into and breakthrough the Mannerheim line with even greater force, signalling the inevitable end of the war.

Certain images and legends define the story of the Winter War: deadly Finnish snipers; ski troops conducting daring raids and ambushes; the terrifying scale of the Russian forces that pitted huge numbers of tanks, including the monstrous KV-2s, against an army that had none; and Finnish troops hunting such tanks armed only with Molotov cocktails.

Hopefully these scenarios will touch on the feeling of these elements.Fighting as the Finns in this campaign will certainly demand clever tactics and true ‘sisu’ (grit!), while playing as the Soviet forces will show the deadly cost so many men paid under poor leadership despite such impressive firepower.

Finally, should anyone want a properly printed and trimmed copy that matches your other Memoir 44 scenario booklets, send me a message - I have a bunch printed out to share. 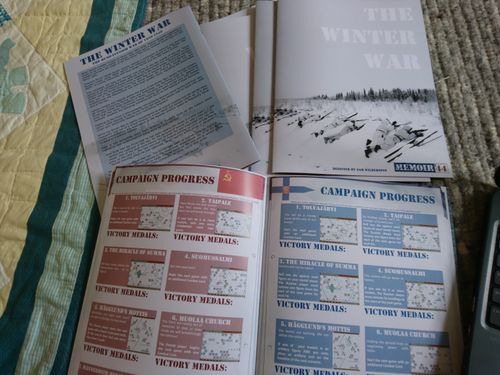 I’m really glad you posted this here. It continues to surprise me how professional this looks. By distributing this for free you keep the M44 community growing with fresh new content to play. Thank you for that!

Great job as usual, and for everyone else I can’t really stress this enough: these PDFs in printed in thick paper look fenomenal. It’s a joy just looking at them.

Yeah it’s a real shame the Breakthrough boards aren’t getting a reprint sooner!

I’m already out of copies of my winter war campaign but have had so many requests this time I am reprinting a load for anyone happy to pay some postage/print cost.

I can send you a print copy if you are willing to pa y postage/some print cost. No worries if not, enjoy the digital version

Thanks for the offer though!

I would love to have a copy of this campaign!