As some of you know, I mostly play solitaire, so I developed some bad habits of just going ahead and playing whichever units I deemed suitable at the time. After playing the online version I realized that when you begin your turn, you are supposed to select the units you intend to activate first, and then move them or fire with them. Even if its to your disadvantage, you should still carry out your plan rather than react to the dice rolls.
So I had the idea that there should be some kind of marker to put down to show which units were selected. This also helps to stop me from getting muddled about who i have or will move, and in a group game it would remove any debate over how many units have been moved etc etc.

I started with dice because I have lots of them, but they didn’t look right to me. I wanted something that blended in thematically, yet stood out to its purpose. My current counter is some Airfix infantry models in the correct scale. I actually bought them to use as SWA units because some of them have mortars, machine guns, sniper rifles etc. Anyway, they fall over more easily than Memoir 44 miniatures, so I glued them onto one-inch poker chips (very similar to Axis and Allies chips). Now they never fall down, are nicely distinguishable, and easy to pick up. I dislike cardboard tokens because I don’t like trying to pick them up. So far, so good.
My next idea is a work in progress. Have you ever seen the 1960s/70s TV show Dad’s Army? In the title sequence they had triangular icons to represent Britain’s defenses (union flag) and thwarted German advances (swastika). If made to the correct size, I thought they would look good. For a regular game I think six for each faction would be enough, so I’m going to try and make some from wood and stickers. I’ll let you know when I’m finished. As i said before, I dislike card, so I want something more tactile. Something about the size and height of a lego brick maybe.

Also, any thoughts on marking special units? There are shield tokens of course, and they look great, but they’re a little fiddly to pick up each time. Does anyone have an idea about something that would hold the shield but could be easily moved with the infantry? 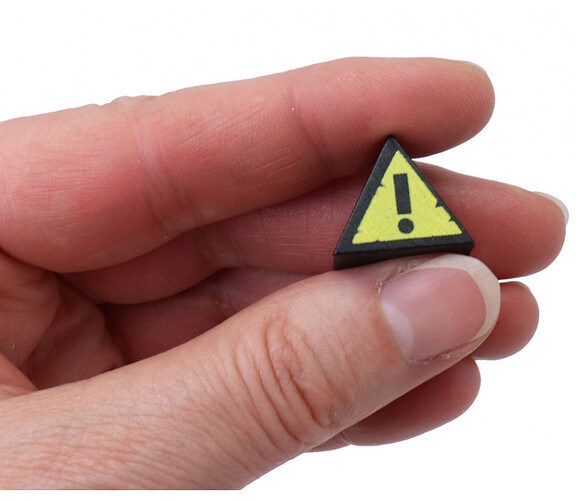 as general markers in various different games. Just the right level of chunkiness for me.
A few printed stickers and you could make them what you want.
The special unit markers can be a handful. I have some 3d printed trays for the units which make it easier to move them around and for holding the markers. I only have enough for games with 1 base set + 1 expansion but for bigger games it’s more tricky. I know a while back someone produced come clear acrylic ones with a little slot for the markers but I couldn’t justify the expense and, of course, I would have wanted enough to hold EVERYTHING.

Those danger markers are great! I use white wooden cubes as activation markers, and for the unit markers I use card holders. 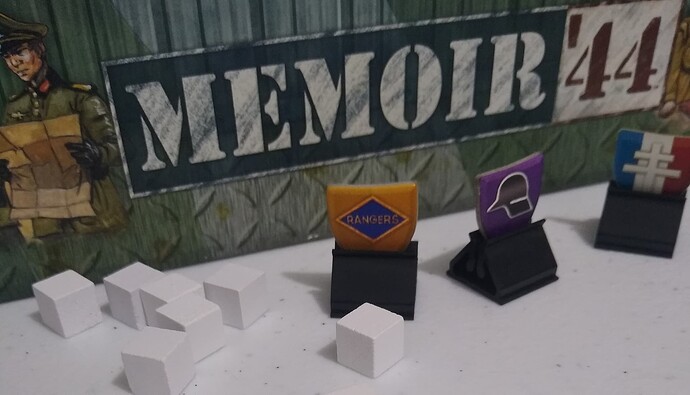 I’ve used glass beads in appropriate colors for marking units that are receiving orders that turn.

Those are fantastic. Simple and effective. I’ve been tempted by the unit trays but I don’t really mind moving the figures, its really the tokens that bother me. Anyway, thanks!

They’re kind of what I had in mind. I will experiment with some wooden bits and bobs and saw a line of the correct width into them. Thanks!

I second on the glass beads trend. I use them as activation markers for several games and rulesets.

There is a “correct scale” for Memoir 44?
Because we are using a “top-down” view of the battlefield similar to a map, I use my own, period correct, tactical map markers on 13mm square chips.

All great ideas. I’m going to adopt one of 'em - at least when I play with The New Flight Plan !