Hello, it seems an online Memoir 44 tournament is coming up. I’ll leave a link so you guys can check it out. I already asked to be admitted. I do not organize it, I’m just sharing it.

I’m very interested in this, however, this would be my first tournament and I have no idea how this is going to go.

Are there any special rules? How are the timezones going to affect the plays, etc? Where are we going to play (Vassal?)?

Seems to be targeted towards players that already attended these things several times, but I might still try it out

Seems like it will be in Memoir '44 Online. I hope I’m able to play just on free credits.

Also there is information there for the schedule of the games.

Yep, Memoir 44 Online for standard games and overlord games will be played through vassal (I haven’t bothered to learn vassal, so I’ll be skipping that)

I haven’t ever taken part on a M44 tournament either, but whatever, It’s explained well enough. Just be there at that day and time and do your best I guess.

Hope to see you on the battlefield

33 players have already signed up! It’s still some days before it happens, so I thought of bumping this thread up just in case anyone else is interested.

Some of the participating generals are already here in the Forum, that’s wonderful! Hopefully the others will join sometime in the future

Let me know if I skip someone that is registered here. In a few hours we will be asked to join a Zoom group where according to the organizer, sam1812: “Refreshments will be served. The latrines are as clean as the ones in your own home.”

I will try to keep this post updated with the results, to be added in a following reply. See you in the battlefield!

Day one was very fun, even If I won only one out of six matches. Looking forwards to tomorrow and maybe some other online m44 competition too.

For those that may be reading this later on, today was the first of the two-day tournament and we did 3 of the 6 rounds. Each round involved 2 games in each scenario in order to allow players to play both sides. The Memoir '44 Online application gives out a final tally of medals and figures that we had to write down and submit to the tournament admin.

@Winters I only won 2 of 6 myself, which was to be expected (kind of) since we were playing veterans. Heck, I played lenances and he told me that his profile picture is of him in the Korean War! Definitely something you don’t see everyday. Also, there were multiple people there that had previously won tournaments, and I don’t mind going home with a 2-out-of-6 score if it means I lost to really good players

One of the things that surprised me the most was when I played gSTEWART. In the last turn he played a Their Finest Hour card against me and he was about to order 5 units. Two of those units were supposed to end the game by hunting down a lonely tank that I had in my left flank and that I couldn’t save. Before he struck the final blow he attacked me elsewhere and it really confused me. I was thinking “why is he attacking me there when the game is already over on the other side?” and then it hit me! In these sorts of tournaments, if you get tied by medals, the tie breaker is the number of figures you eliminated! So he was in fact racking up figures before he finished the game the way I thought he was going to.

I will try to come up with a design for a badge for the forum users that have attended this tournament. Even if players join the forum after I designed it I will assign it to them as a participation token. Hope I can whip up something that looks nice on people’s profiles

Everybody that participated in the tournament that is registered here got the following badge: 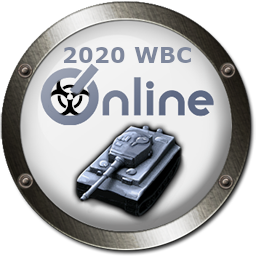 This was my take on the Memoir Online application, I just added 2020 WBC and the biohazard symbol to flavor it as the pandemic edition

Click here to go to the badge page and see who has it.

Here are the final standings for the tournament: 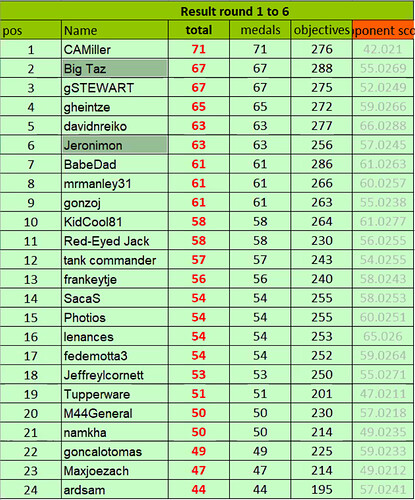 (And yes, I did get my butt handed to me, but I played against some of the best players in the world!)

Congrats to the winners and big thanks to Sam for organizing it. I had a wonderful weekend.