Topic for after action battle reports: feel free to comment your experience with this scenario!

I played this on the 6th June, almost a month ago, and just got around to check my footage. I have a tiny Go Pro that I put on top of the Memoir '44 Box and I recorded our play of this scenario as a timelapse and posted it to the Memoir '44 Fans YouTube account: 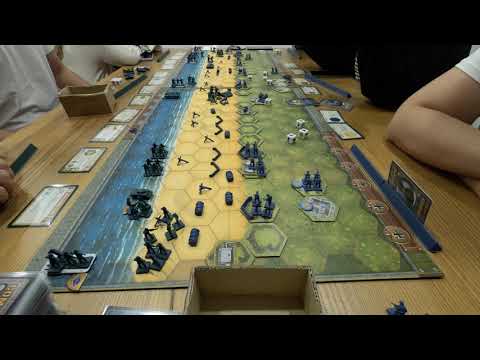 I was playing as the American Commander in the middle sections and I was really short on cards for my left sections the entire game. It didn’t help that the enemy team used Barrage twice, cleaning out an armored unit and an infantry unit for effectively 2 victory medals, but it was really fun! It was my first Overlord match and I really enjoyed playing with my family. It was a great evening.

Each side got to use Their Finest Hour, which was a cool highlight of the game as well as a Behind Enemy Lines I used in the middle to score 2 victory medals in a single turn – moved forward and finished off an enemy infantry unit, and then continued forward to take one of the city hexes in the middle section.

Our right sections faired relatively well against all that was thrown at them, and we were able to take out those german artillery guns really early on with some lucky dice rolling. On our left sections we were not able to pierce through the sea bluffs and proceed inwards as that area was expertly defended by my brother in law (which was only playing his second game!).

In the end, perhaps we did not honor history, but we did good as maybe a first wave at Omaha

In future games, I need to put the camera higher up and on the middle, kind of like Shut up and Sit down! did in their video play-through to get a better angle.