This topic of Carlos Paz’s unofficial expansions comes up every now and again but I’m happy to explain the stance we have towards it here at Memoir '44 Fans.

There are tons of fan-made content for Memoir '44 that are basically unofficial expansions. Dozens of scenarios and campaigns that cover other theaters of war and lesser known battles that are have been put out there for our collective enjoyment. I have a large collection of these unofficial expansions in the #campaigns-and-scenarios category of the forum.

Every Memoir '44 tournament is also a sort of unofficial expansion in the sense that new scenarios are built specifically for it and the organizers usually bundle them up and make the scenarios available online somewhere.

To put it simply, if you make an unofficial expansion and make it available for free, you’re adding to the collective amount of content for the game for free, contributing for the community aspect of the game, etc. If you try to make paid content, you will in essence be doing something illegal because you will be attempting to make profit out of someone else’s intellectual property, no matter how you try to circle around it.

This is why pretty much all fan-made content is available for free, with this notable exception.

There are fans of Memoir '44 that sell unofficial content ethically. I’ll give you 2 examples:

Hopefully you can distinguish between these examples and trying to create a professionally packaged expansion that uses the intellectual property of the game for profit. Multiple people in the official Facebook group that have connections at Days of Wonder have confirmed that these expansions are frowned upon by the original publisher of the game and that they actively try to take it down. Seeing as this is their stance (which I wholeheartedly agree), you have to understand we’ll suppress links to buy Carlos Paz’s unofficial expansions.

I challenge you to look him up on etsy and ebay and see for yourself the expansions and prices he asks. You will find outlandishly high asking prices for expansions that have been reprinted recently, up to 900 Euro for a D-Day Landings expansion: 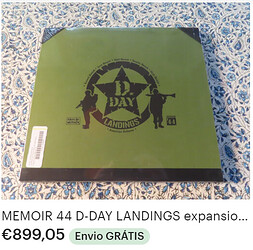 That ought to tell you that this his content is motivated by profit, not by love of the game.