I tried out the New Flight Plan for the first time yesterday and I had fun trying to figure out the rules. It seems like aircraft are intended to be played to perform attack runs and then retired on the next turn, since the cards in your hand are not often matching the type of plane you have on the field (and also there isn’t ammo for more than 2-3 attack runs).

Here’s a situation I wanted to make clear, with a picture: 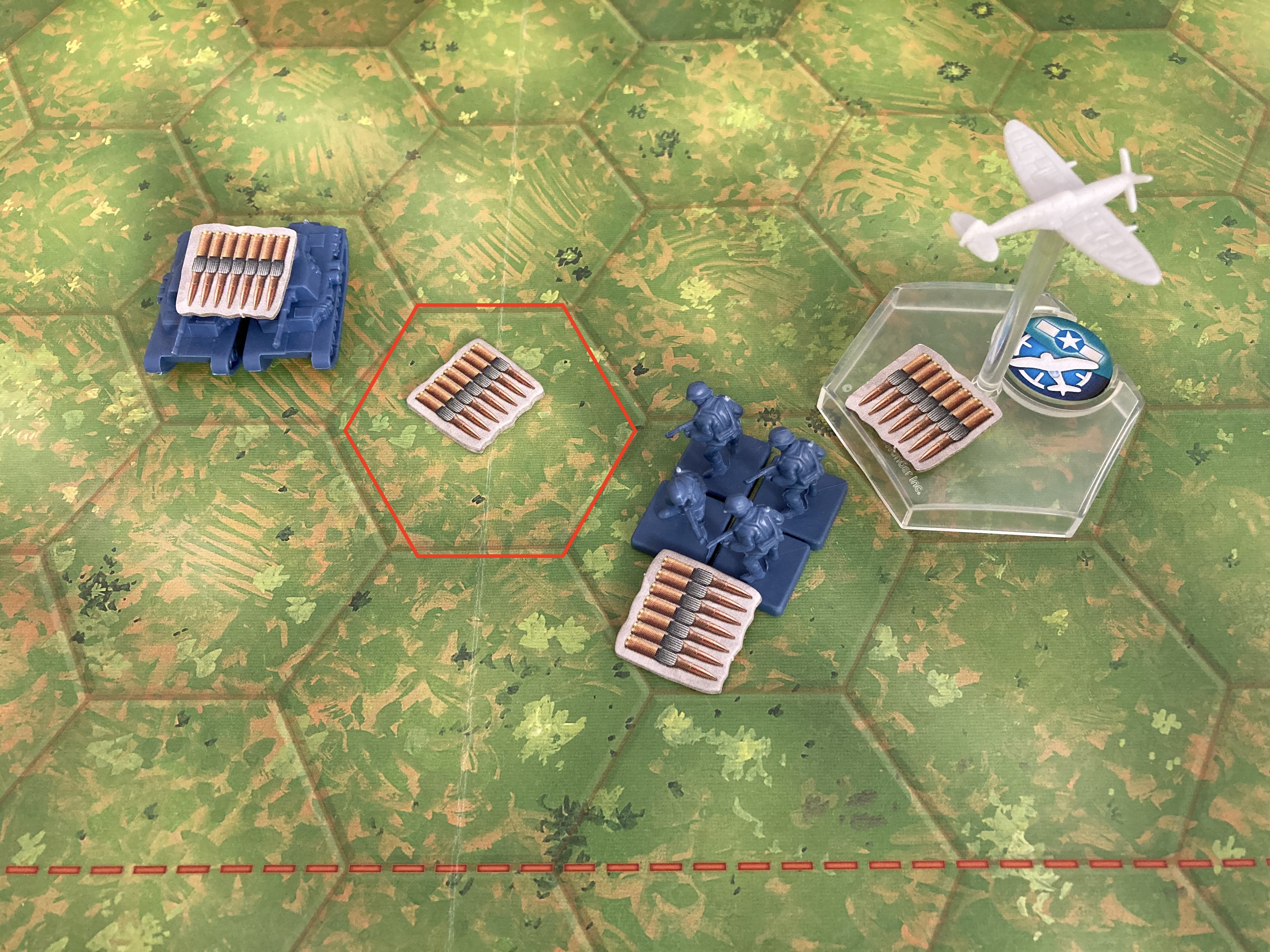 IMG_06924032×3024 3.67 MB
Let’s say that I deploy this fighter and try to do an attack run starting with the enemy armored unit. In order to get to the infantry I have to go over an empty hex, and my question regarding this is: Do I need to leave an ammo marker in the empty hex? It kind of feels wrong to waste a marker like that, but my interpretation of the rules is that it’s being played correctly: 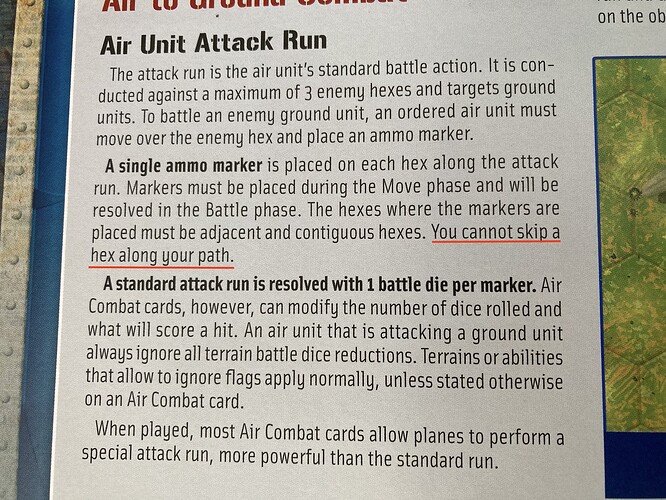 Did someone interpret this differently? Do you save the ammo token if nothing is on the hex?

You don’t fire until you see the whites of their eyes. In other words, AMMO tokens are only placed on enemy units. You have a flight range of (4) hexes but you do not fire your guns or drop your bombs until you are on a “target” hex. The empty space is just an empty space, it will however count in your flight distance of (4) hexes.

The reference to not skipping a space means you cannot fire at enemy units that are not adjacent. So if there is an enemy unit, a space and then another enemy unit, you will have to pick one of the units on which to place AMMO. You are not allowed to place AMMO on a unit, skip a hex and then place AMMO on the next enemy unit. When you fly over an open space after flying over a “target” space your ability to fire ends.

This is consistent with the original AIRPOWER card where you fire at adjacent units but lose the ability to fire at units that are not adjacent.

So in the image you posted, you could fire at the tank OR the infantry unit but not both.

NOTE: A more careful read through of the rules may help. But on another topic. Planes do not retire after attack runs, they remain on the board as long as they have ammo.

Thanks for the thorough reply Jim! I’ll confess that when I read it I disagreed, for I still did not see any evidence that the enemy units have to be adjacent. However, it seems you nailed it:

This is consistent with the original AIRPOWER card where you fire at adjacent units but lose the ability to fire at units that are not adjacent.

I asked this same question on facebook and it seems that this was asked before, roughly at the time the New Flight Plan expansion came out. The true answer comes from the man himself, Richard Borg, over on the Board Game Geek forums:

So this actually answers 2 questions: it doesn’t make sense to put ammo markers in empty hexes, and when performing attack runs with Air units, the enemy units need to be adjacent! You were right all along

Richard Borg goes over it in some more detail (click the image to zoom in): 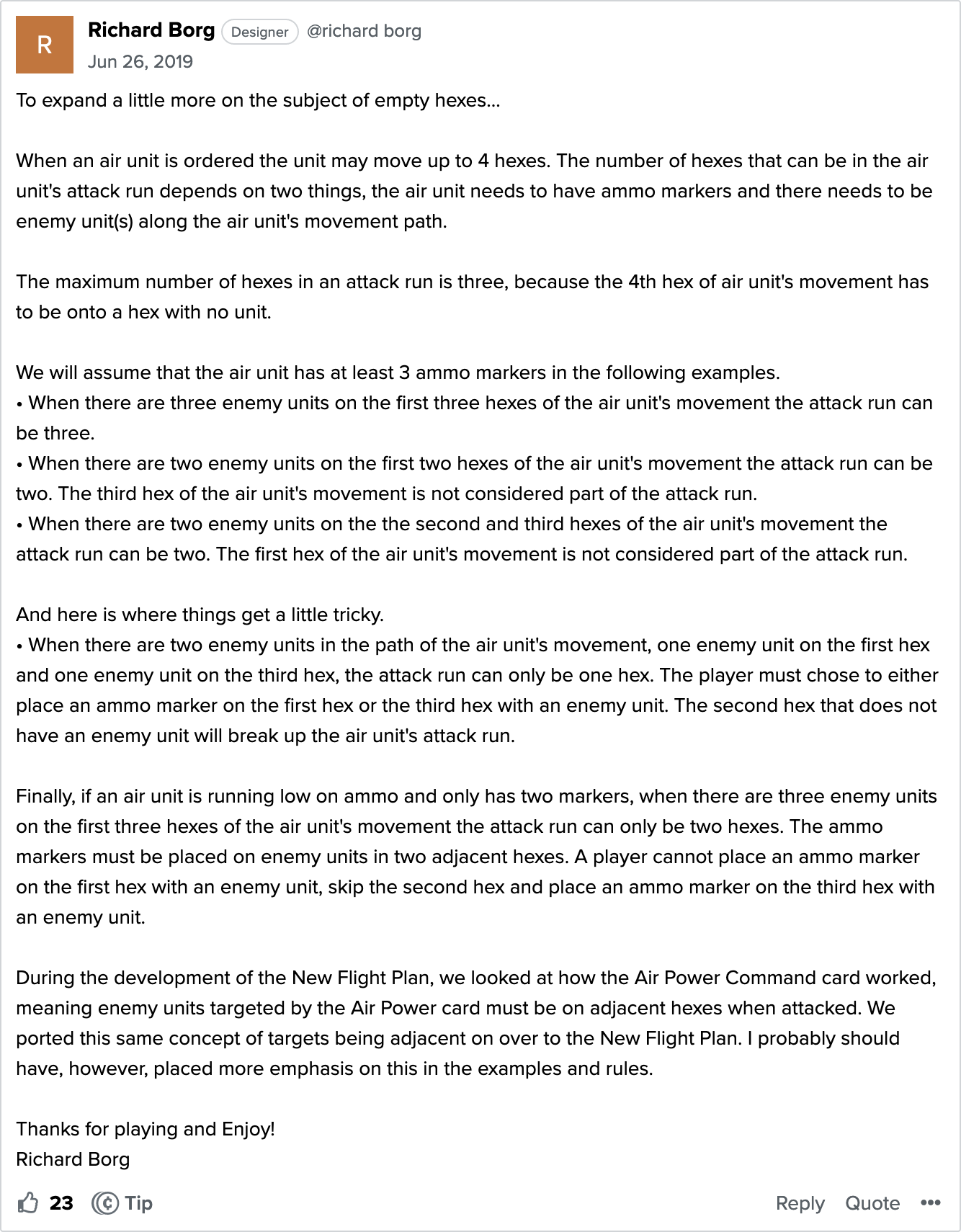 So this expands on the topic and clears out another question: what if I’m flying over 3 enemy hexes but I only have 1 or 2 ammo markers? The answer seems to be that when you have a single marker, you can place it in any one of the enemy units, but if you are going to place a second marker, you need to place it on an enemy unit that is adjacent to another that already has the ammo marker. This means that flying over 3 enemy units I am not able to mark the first one, skip the second and then mark the third one. This is what is meant with the “can’t skip a hex” part of the rules which got me confused in the first place.

Exactly like you said, they did model it after the Air Power card.

And finally, here is one more detail that mentions that after flying over enemy units and marking them for hits, you can keep moving to any hex after the markers have been set.

Here is the AIR POWER card which might help for reference regarding attacking adjacent hexes. 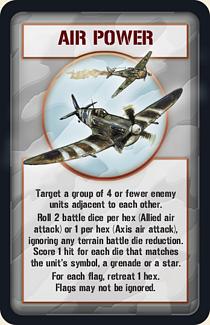