In this video I go over some ideas I had whilst doing an effort to make my Memoir '44 collection compact, yet practical.

Further to my comments on YouTube, here is a photo of my set up.
I only have two copies of the basic game.
But I have downloaded and printed a lot of extra scenarios and the necessary hexes, equipment, etc.
I also like to use plastic figures in addition to the ones that come with MM44, so you can see Desert Rats, German paras, etc.
Plus I like having ‘real’ tanks as well as the MM44 ones.
So I have a lot of bits and pieces that need storage.
Shoe boxes and chocolate boxes mostly!
I will let you know how I get on this weekend with your new boxes.
Regards
Mark

Welcome to the Forum @pragueimp !

There’s a lot of scenarios you can play with 2 base game boxes, and lots of storage space too!

This weekend I drove to northern Portugal to visit the in-laws and brought along the game to play after a family lunch. I was hoping to get to play at least one game, and I did, but my wife stole the box and played a couple of games with her sister and introduced her to the game. She enjoyed it, and it seems like we might have another general in the making

Since me and her were playing Mediterranean Theatre at home, I wanted to bring along the Winter Desert Board, but I felt that we could also go for a winter scenario, so I packed the essentials for playing scenarios on both fronts plus the Combat Cards (Winter and Desert). I think I managed to get it quite compact:

This barely took up space in the boot of my car. The small square box holds all the medals and other tokens, and it fit inside the box alongside everything else. With just one Memoir box + 3 army packs and we were able to play on both fronts. This seems like a really great option for going on vacations with Memoir 44 without having to pack your whole collection along for the ride.

Also I want to mention that yes, the cardboard boxes are of low quality but I’m seeing this version as more of a prototype than anything else. I will remake them with more precise cuts and materials eventually.

Hello goncalo! I’ve recently printed the hex tuckbox, thanks for that idea. However, I’ve to ask. Does your m44 base game box fully closes? I’ve found that the hex box it’s a bit tall so if I add the board and the manual, the box lid doesn’t go down all the way. It closes enough to work anyways.

I’ll be sharing my setup when completed. Cheers!

We had a great couple of days playing various scenarios, as well as looking at different storage ideas.
@goncalo, your small boxes were great for storing various cards, so I am going to get them printed on thicker board and in high quality (I am lucky that the guy I was playing against can do it on his work printer).
After seeing some of your other ideas, we to a local hardware store to look at storage boxes.
Below you can see the two I opted for and how I am using them.
Plus a photo of me celebrating taking out the tiger tank in Bazooka Town!
Regards
Mark

However, I’ve to ask. Does your m44 base game box fully closes? I’ve found that the hex box it’s a bit tall so if I add the board and the manual, the box lid doesn’t go down all the way

I think it does close all the way, but I’ll have to check tomorrow and post a photo of the inside as well so you can see how I’m using it.

After seeing some of your other ideas, we to a local hardware store to look at storage boxes.

It really feels great to know that I helped someone get through the same questions I’ve had previously. That’s the whole reason why I started this forum! I think you nailed the size of them for your custom miniatures and it looks great!

The tiles boxes I may or may not use in the future.

I’ve modified some though, one for every expansion I own, because I like colours 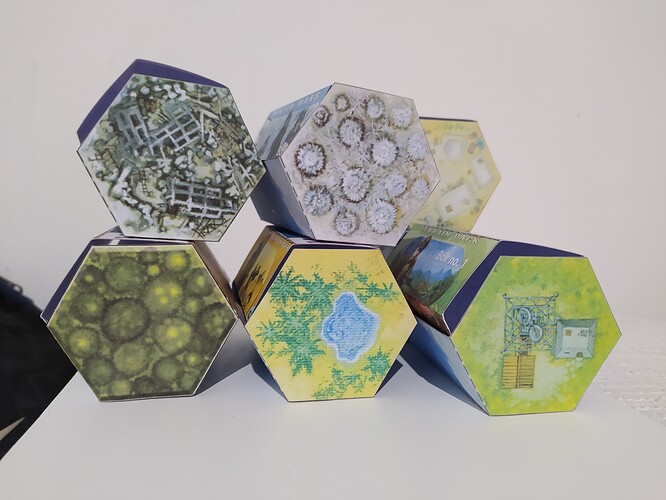 Here are some links if anyone wants them:

Feel free to add them to the first post!

Does your m44 base game box fully closes?

Revisiting this, I was in fact able to close the lid fully on my Memoir 44 box. Let me post another picture: 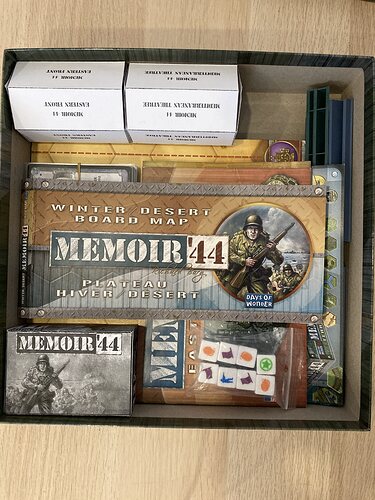 If you lay down the board on am empty box, you will see that the box is square but the board is not, so there is an area of free space on each side, one bigger than the other. I put the hex boxes at an angle in the area with the largest space. Here is a side view so you can see how they sit alongside the board: 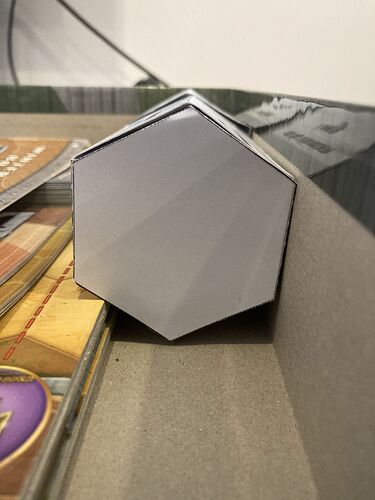 The hex boxes don’t go over the green edge of the box, so I’m able to close the box fully. I think it would probably fit one more box of hexes and still close, it’s sort of a tetris game at this point

. I put the hex boxes at an angle in the area with the largest space. Here is a side view so you can see how they sit alongside the board:

Ah I see. I was trying to fit all (7 I think) hex boxes in the box, plus board and manual.

Ah I see. I was trying to fit all (7 I think) hex boxes in the box, plus board and manual.

I might store them all together as well, but I will not put any boards inside the box to avoid this problem

Like I said in the video, I want to avoid storing all my hexes in one box, my boards in another, etc. because then I feel like I have to unpack everything just to play a couple of games at a time and this is too much of a hassle for me. I want to try having the expansion I’m currently playing separate with every component I need, it’s way easier to just unpack, play and put back together when I get time to play

Yep, I may go that route too. Just pack what you need in the specific situation.

Problem is, when playing snow maps, I usually need eastern front + winter wars hexes, because if not I may end using green ones and thats a shame having snow equivalent ones.
When playing overlord, I always need more than the base game tiles, I usually compliment with terrain pack ones. (I use mountains as hills, or I may need more town hexes, who knows what else I may need xD)
Mediterranean maps, may use some terrain pack hexes too, in some scenarios.

Nevermind the round and shield markers, bunkers and bridges, I have no idea what I need every time I plan to play. These I may carry always all together given they don’t occupy much space.

So for me, there isn’t an easy way to store them and have them “ready to go” in every situation.

I think I’ll end just planning ahead what I need everytime, and prepping for that specific scenario.

Brilliant. Thanks for sharing!

I went for this finally, idea being just worring about getting the right board, deck and hexes loaded up for my game. Every army, obstacle, token, bridge and bunker are in that case. 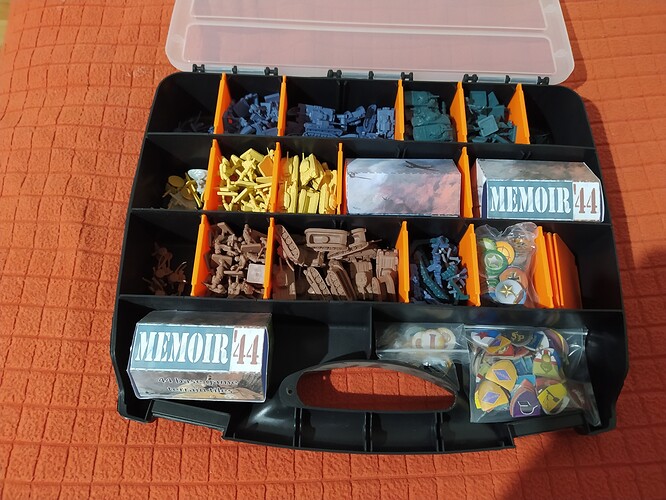