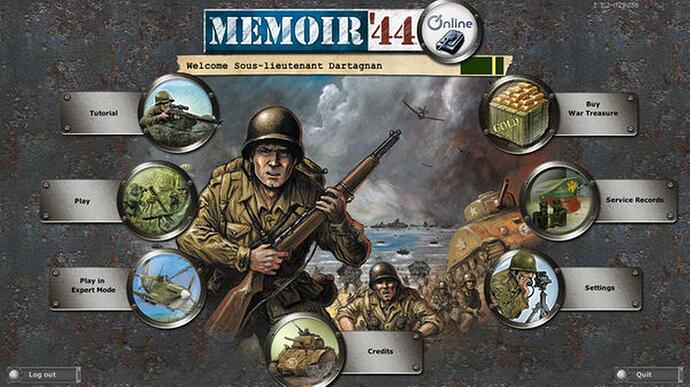 There is a version of Memoir '44 developed by Days of Wonder that can be played on PC and that has also been published on Steam. This is a pay-to-play game that comes with a few tokens that allow you to try out the game after downloading it.
After you spend all of your tokens playing, you need to buy a pack of tokens that cost real money. This has resulted in some mixed feelings in the reviews, with only 50% of the players giving it a positive note after playing (stats for the past 30 days).

I have not tried it, but it seems to be possible to play scenarios against a CPU, but I’m not sure if that spends your tokens. I cannot try it since I’m using Mac OS.

Have you tried it? What did you think? How does it compare against other ways of playing Memoir '44 online with other players (e.g. Vassal mod)?

Yeah, it’s a shame that they charge per game, instead of offering the game for a set price. However I enjoy it a lot.

Seems like youve got some free games to begin with.

How many games do you get for free? Does playing against the CPU count for the free game tokens?

Yes, playing the CPU counts. You get 50 gold for free, each game (except a couple of scenarios that are free) will cost about 2 to 4 gold I think. So about 18 games more or less, if you only lose. If you win, you keep the gold. So you will get about 36 games probably for free. It doesn’t sound as much, but I haven’t payed anything yet and I play occasionally. I will be playing the upcoming tournament with the gold I still have, and will consider replenishing it when I run out, I think it’s worth it. If you were to play lots of matches every day though, that would be expensive haha

Oh, another thing. You can get this through steam and by DOW website. You can log into different accounts through either client. And you get free games per account. So, you know, you won’t keep your rank or achievements if you switch accounts, but you could play more for free if you create more accounts.

I couldn’t buy gold through my steam client though, (idk why) but I’m pretty sure I would be able to do it through DOW website.

I have the original version played on the server that DoW set up years ago. It works with my Mac, which the Steam version does not.
To get a challenge from it, I think it’s best to pick a scenario that has a low winning percentage for the side you want to play. Otherwise, it’s pretty easy to beat.