How do Paratroopers retreat?!

So says page 10 of the MM44 rule book, but what about paratroopers? (’’…we’re supposed to be surrounded, Lieutenant’’)

I’ve recently been playing a lot of scenarios from Crete, where most of the action involves Germans jumping right into the middle of Allied positions. So what happens when they get a flag?
Unlike most scenarios, where one side is attacking across the board towards another, paras don’t have a home/baseline to retreat to (retreat: withdraw from enemy forces as a result of their superior power or after a defeat (OED))
Equally, what does an Allied unit do when it gets a flag from an Axis para unit which has landed in (or moved to) a position between the Allies and their side of the board? On an island like Crete, the whole board/island is theirs, so surely they can retreat in any direction?

I ask the question simply because it has happened so many times in these paratrooper scenarios! (And my apologies if this question has been answered elsewhere – I had a look online, but couldn’t find a solution.)

Here are some examples:

In the first photo, according to the rule (above), the British Infantry (right) must retreat to Hex 1 or 2. But Hex 1 is not exactly retreating – it would still be next to the German attacker! So that leaves just Hex 2. Similarly, the German should retreat to Hex 5 or 6, but again the first choice leaves them adjacent to the Allies. 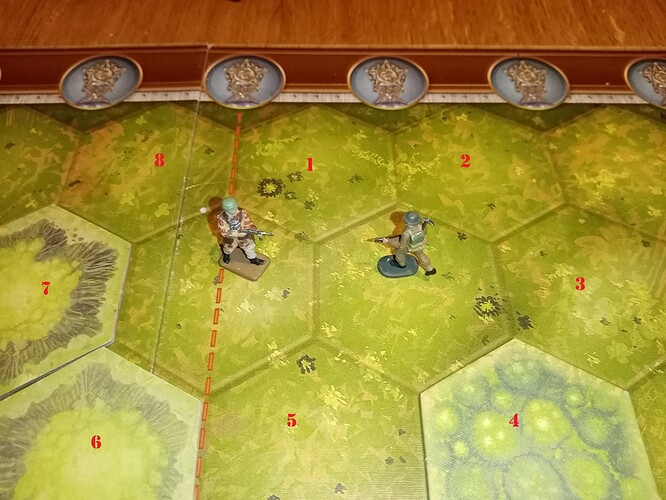 The second photo is very similar, but this time both sides cannot obey the rule and retreat towards their side of the board; Hex 11 leaves the Allies adjacent to the enemy, Hex 15 vice-versa. 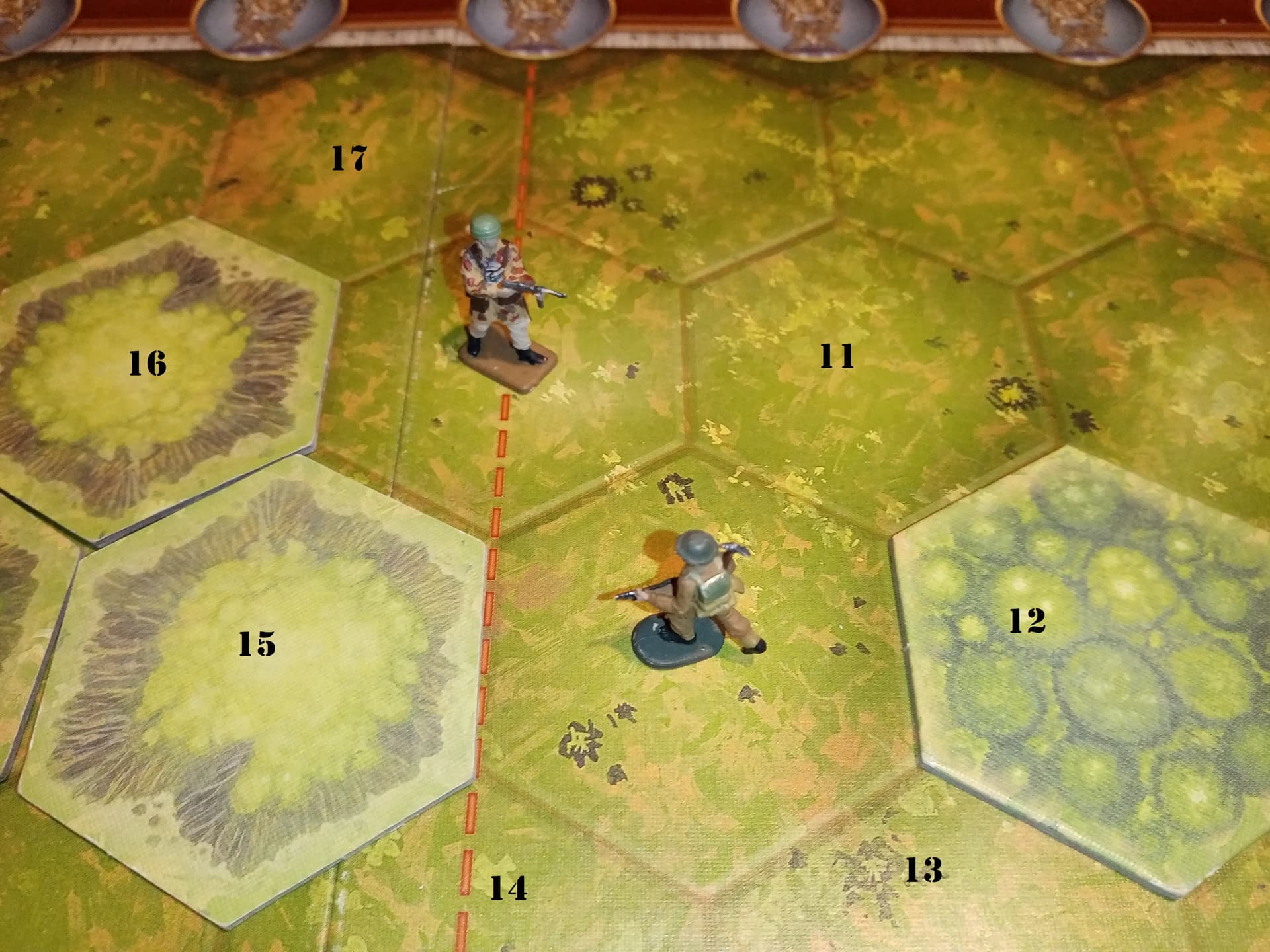 ‘‘If a unit cannot retreat; is forced to retreat off the limits of the battlefield; or would be pushed back onto a sea hex, one figure must be removed from the unit for each retreat move that cannot be completed’’ (Rules, p10)

It would be harsh to say that the units in photo 2 cannot retreat – they can, but not in the usual direction. 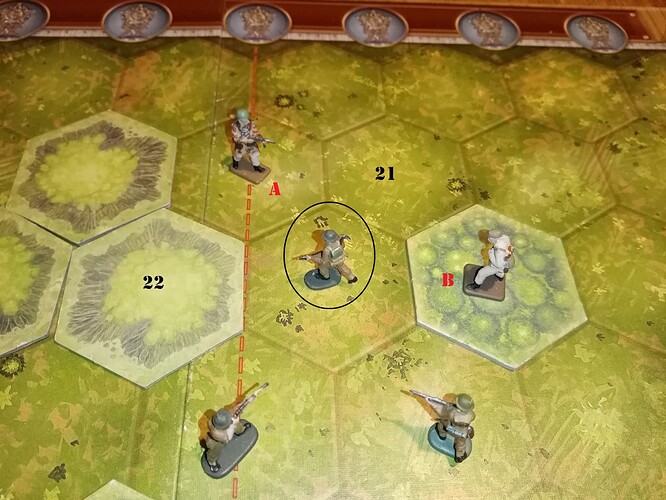 Finally, the third photo shows a British unit (circled) which has only two escape routes. If German unit A throws a flag then the Brits have nowhere to go – Hex 21 and 22 would leave it adjacent to the attacker, so a flag means one lost figure. But if German unit B attacked and threw a flag, the British unit could retreat to Hex 22, even though it leaves it adjacent to another (non-attacking) enemy unit.

I welcome your thoughts on, and experiences of, this situation.

Hi there, I don’t understand a word you’re saying sorry. In my opion if one throws a flag one must retreat towards his/hers baseline. Towards your own baseline is away from you’re oponent(s baseline). If the hexes towards your baseline are impassible or ocupied and you therefore can’t retreat then you lose a figure for every flag thrown.
Kind regards

Sorry if it is too complex for you to understand - I have edited it to make it a bit simpler.
The only thing I can suggest is that you try some paratrooper scenarios and see what happens…

Sometimes there is a scenario where Paratroopers are given the option to retreat differently:
AMERICAN AIRBORNE

However, unless stated in the Special Rules for that scenario, units always retreat to their own baseline (where their medals are).

It may be that a unit when retreating is still forced to be adjacent to an opponents unit. This is still retreating even if you don’t like the result or would define it differently. For Memoir '44 - a retreat is simply a movement towards your own baseline caused by a flag result from your opponents dice.

I reviewed the scenarios that come with the Crete Campaign and did not find ANY special rules that changed the movement for paratroopers in those scenarios. Hope this helps.

Thanks for your comments, and for taking the time to find an example; I’m sure there will be more, but I haven’t discovered any.
The Invasion of Crete 2011 booklet you reference (thanks again) has 6 scenarios - there are at least 30 more that I know of! I have played about half of them and looked at the rules for the others - no mention of retreat/flags!

I like the Special Rule you mention from the example you found:
‘’…Airborne units may retreat in any direction and Axis units may retreat toward either baseline.’’
If Richard Borg thinks it is correct for this scenario, then why not make it a general rule for all airborne scenarios?

Just to add a bit more fuel to the fire, this scenario (Invasion of Crete) clearly shows the Germans advancing from the right - so why on earth would they retreat up the board rather than right, where they came from?!

Just to add a bit more fuel to the fire, this scenario (Invasion of Crete) clearly shows the Germans advancing from the right - so why on earth would they retreat up the board rather than right, where they came from?!

Why? Because that is the rule in Memoir '44. It is as simple as that. The game is not trying to accurately portray what you think militarily should be done. It is creating an avenue for general players of boardgames to have a simple ruleset so that without a lot of thinking or conjecture one can quickly pick up the game and play it.

Memoir '44 Basic Manual p.10
◆ A unit must always retreat toward its controlling player’s side of the board.

If you own a copy, you can play with any house rules you choose. However, if you ever decide to play in any sanctioned tournament; surprise!!! they will be using the original rules of the game unless the tournament master has decided on some other option in advance.

‘‘It is creating an avenue for general players of boardgames to have a simple ruleset so that without a lot of thinking or conjecture one can quickly pick up the game and play it.’’

Exactly!
Which is why we have forums like this for a more detailed discussion of the game and suggestions for additional ideas, scenarios, and … rules!

More fuel for the fire. The standard rules state that a unit must retreat in the direction of the player’s own broad side, although that choice, usually one of two hexes, is made by the defending player. In the case of paratroopers, you could perhaps agree in advance that they must retreat in the direction of the attacking player’s choice. Or, failing that, you could decide it by dice roll. Thematically, paratroopers may not have had sufficient time to establish points to retreat to, and thus stand vulnerable. Maybe a re-roll of one dice, with a kill on infantry only?

I say stick with the basic rules, keep it simple and retreat to your home side.

Thanks for your thoughts.
I have now come up with my own house rule for scenarios involving paratroopers / units behind enemy lines.
Hope you have managed to fit in a few more games recently…

They just tetreat towards their baseline.
Theres nothing special about them.

As mentioned above, the creator of the game (Richard Borg) thinks they are special, so gave them the opportunity to retreat in any direction…

I’m sorry I still don’t grasp what the problem is and why there should be a house rule for paratroopers, the boardgame rules are clear. In an occasional scenario there’s is scenario rule that superseeds the basegame rules.

I’m sorry but it’s just not my cup of tea. Of course every one is free to play as he or she chooses wether it is a house rule for paratroopers or any other house rule, playing with pokerchips in stead of mini figures or adding 3d selfmade terrain that blur the terrainhexes its all ok and by all means do so if you want.

There is no ‘‘problem’’!
Don’t get so stressed about it.
If you want to just play the basic game then please do so, and let the rest of us explore the expansions, extra scenarios, painting the figures and tanks, and generally enjoying ourselves…

I love the game and play all of it’s expansions, especially breakthrough. The most fun are the breakthrough scenarios with paradrop rules. As the board is bigger it makes the strategy even better. Manado landings is my personal favorite.
I’m not stressed about it don’t worry .
Happy gaming! Cheers!