Solo play: suitable (I actually played against someone, but I believe it is good for solo)

Historical Background:
After the failure of Operation Market Garden, the small corridor that led to Nijmegen was still a dangerous place. The German 107 Panzer Brigade even managed to break through. German troops still had a strong bridgehead on the west bank of the Meuse. Allied high command decided this had to be destroyed to break German resistance in the Netherlands and to open the way for the British, led by Montgomery, to invade the Rhineland. The 7th American armoured Division was called in from the Elzas to do the job. Intelligence suspected unorganised German resistance. Venlo should be reached within two days. On 30 Sept the attack on Overloon started; this is where the road to Venray was located, and after that to Venlo. Because of the intelligence the Americans start the battle without any reconnaissance. The next days were very tough for the Allied forces. The Germans had dug in inside the forests and Panzers and Fallschirmjäger carried out severe counterattacks. The Americans run aground in the mud and the heavy German fire. Overloon is not taken within two days, let alone Venlo.
Briefing:
Allies 6 cards; Axis 5 cards, you start
Conditions of Victory:
5 Medals; objective counts as temporary medal.
Special Rules:
Put badges on the specialized units (troop 2).
Dutch Open 2015; Scenario 16241

NOTE: 30 woodland tiles required, which is more than are in the base game. Although I do have two base games, here I actually used model trees.

A great way to get back into playing after a bit of a break – quick and easy to set up, no complex rules to think about, just roll the dice and get on with it!
This is one of at least five Overloon scenarios; it is the quickest and easiest of them.

The woodlands really play an important role in this scenario – restricting movement and reducing the firepower of the tank units.

My opponent (Axis) was slow to get his elite panzers into the game, which I think ultimately cost him victory. He went 1-0 up quite quickly, but some good cards and dice saw me 1-3 up. Then the game was nicely balanced – three of my tank units were eliminated, but so were both of his. This left his infantry in a difficult position and (partly due to poor dice throws for him) they were overpowered in the centre, leading to a 3-5 Allied victory.

I was really happy to use my newly painted Caesar panzergrenadiers and Imex Easy Company figures! 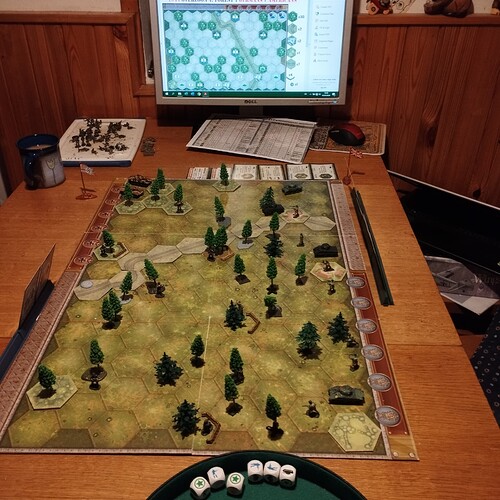 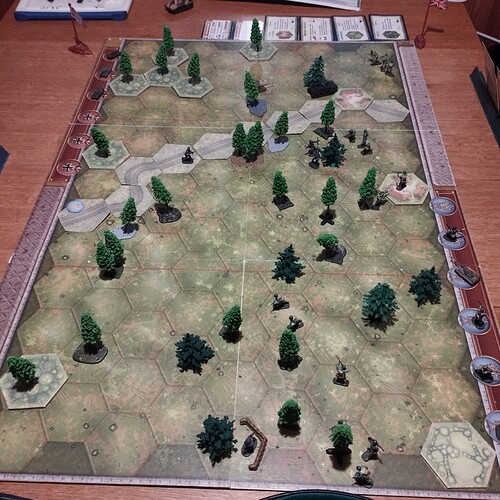 very nice to see the PragueImp collection in action. I am partially colorblind so the US versus German memoir 44 Pieces drive me crazy. I was looking at the scenario on your computer screen in the image. Here is image 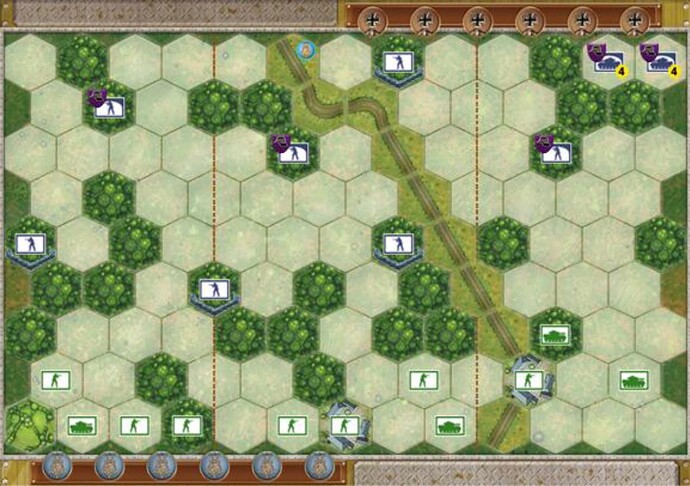