Historical Background:
The German strongpoint Wn12 (named “Daimler” by the Allies) was an artillery battery with 155mm French guns. Wn14 (named “Sole” by the Allies) was defended by a grenadier company. On 6th June 1944, after a landing on Queen Red (Sword Beach) in front of strongpoint “Cod”, which inflicted heavy losses on the sand, the 2nd East Yorkshire Regiment
arrived in the afternoon on the south edge of Ouistreham in front of “Daimler” and “Sole”. Supported by tanks of B Squadron, 13th/18th Hussars, the East Yorks attacked the two German strongpoints. After intense close combat, “Sole” was captured at 3.45 PM. “Daimler”, however, resisted until 6 PM, once again inflicting heavy losses on the East Yorks.
Briefing:
7 Medals.
The artillery bunker is a Temporary Medal Objective for the Allied player.
Conditions of Victory:
Axis 5 cards; Allies 6 cards; move first
Special Rules:
British Commonwealth Forces Command rules are in effect (Nations 5).
Special Weapon Assets (late war) rules (SWAs 4) are in effect for units equipped with Anti-Tank Guns (SWAs 5), Mortars
(SWAs 6), and Machine Guns (SWAs 7).
The Axis player lays out the Minefields (Terrains 29).
Scenario link

Report
We wanted a quick to set up and relatively short game for a Sunday afternoon.
It was certainly easy to set up, but a much longer game than anticipated because the Germans were so well dug in.
SET UP 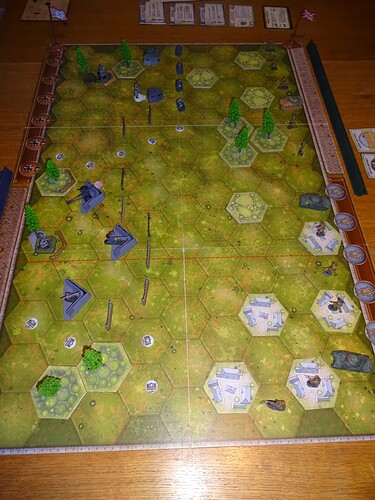 DSC042031920×2560 442 KB
This meant that the British (me) had to be very careful or risk being picked off easily by the Germans. The three tank units were ineffective - only one dice againt any of the targets, and two of them were destroyed by the Germans.
It turned into a bit of a chess match, with the Germans waiting for me to move, and sometimes not actually able to do anything on their turn.
Slowly but surely I took the right flank but then my cards got poor and it took a while before I had the means to finish the game by taking the left and the Temporary Medal in the centre.
This was pretty much like reality - a long battle with heavy losses for the victor (7-4, but a number of my units were down to one or two figures).
FINISH: 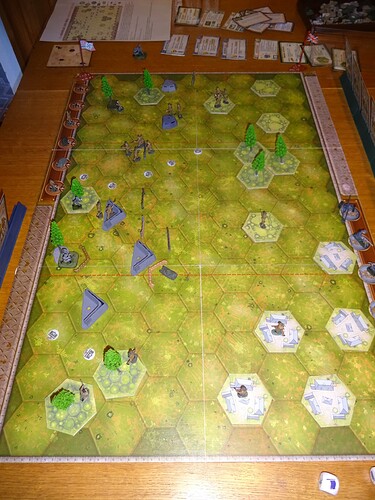 Overall a really interesting and satisfying scenario - but don’t expect to do it in less than an hour!

Nice! I’m hoping to be able to find a website to read battle reports or even watch YT videos but there’s not a lot of those.

Btw; where did you get the trees from? I kinda wanna do that; that looks cool!

Thanks.
Regarding battle reports, Osprey Publishing do a lot of good stuff, some of which you can get for free.
I got the trees from Ebay. I cannot remember the company (they came from China!), but if you type in trees for wargames you will find some others.