Historical Background:
Building up their forces through the now opened supply lines, Rommel’s Afrika Korps eventually broke out of the cauldron, seizing Bir Hakeim but only capturing about 500 wounded Frenchmen. On 13th June, “Black Sunday”, 21st Panzer shreded 22nd Armoured Brigade to pieces, threatening Tobruk and cutting off XIII Corps on the Gazala line. The next day, Auchinlek authorized General Ritchie to withdraw. Defenders in El Adem and neighbouring boxes held firm, allowing 1st South African Division to escape intact along the coastal road. But the road could not accommodate two divisions. With Panzer Divisions blocking the east, the remaining brigades of Northumbrian Division were forced to attack Brescia and Pavia Divisions and head south in the desert, before turning back west. German Panzers raced north, but could not move fast enough to close the road before the bulk of British troops had escaped!
Briefing:
Axis 5 Command cards. Allies 5 Command cards; move first.
Conditions of Victory:
6 Medals. Exit markers are in effect on the two road hexes at the board’s edges for the Allies.
Special Rules:
North African Desert Rules (Actions 9).
Allied Armour can only move 2 hexes and battle.
British Commonwealth Forces and Italian Royal Army command rules.
Air rules are not in effect.
Scenario link

There are many great scenarios from the early desert war. This one is simply a case of ‘run for it’! The allies have to get out before the Germans trap them. So quite different from most scenarios where you are attacking your opponent.
Relatively quick to set up and fun to play.
Strongly in favour of the Allies, but good cards and dice from the Axis won this encounter (5:4). In fact, it looked like I (Allied) would win as I quickly overwhelmed the Italians blocking my right flank (top of the picture). But my good cards dried up and my opponent went from 1:4 down to defeat me at the last moment! 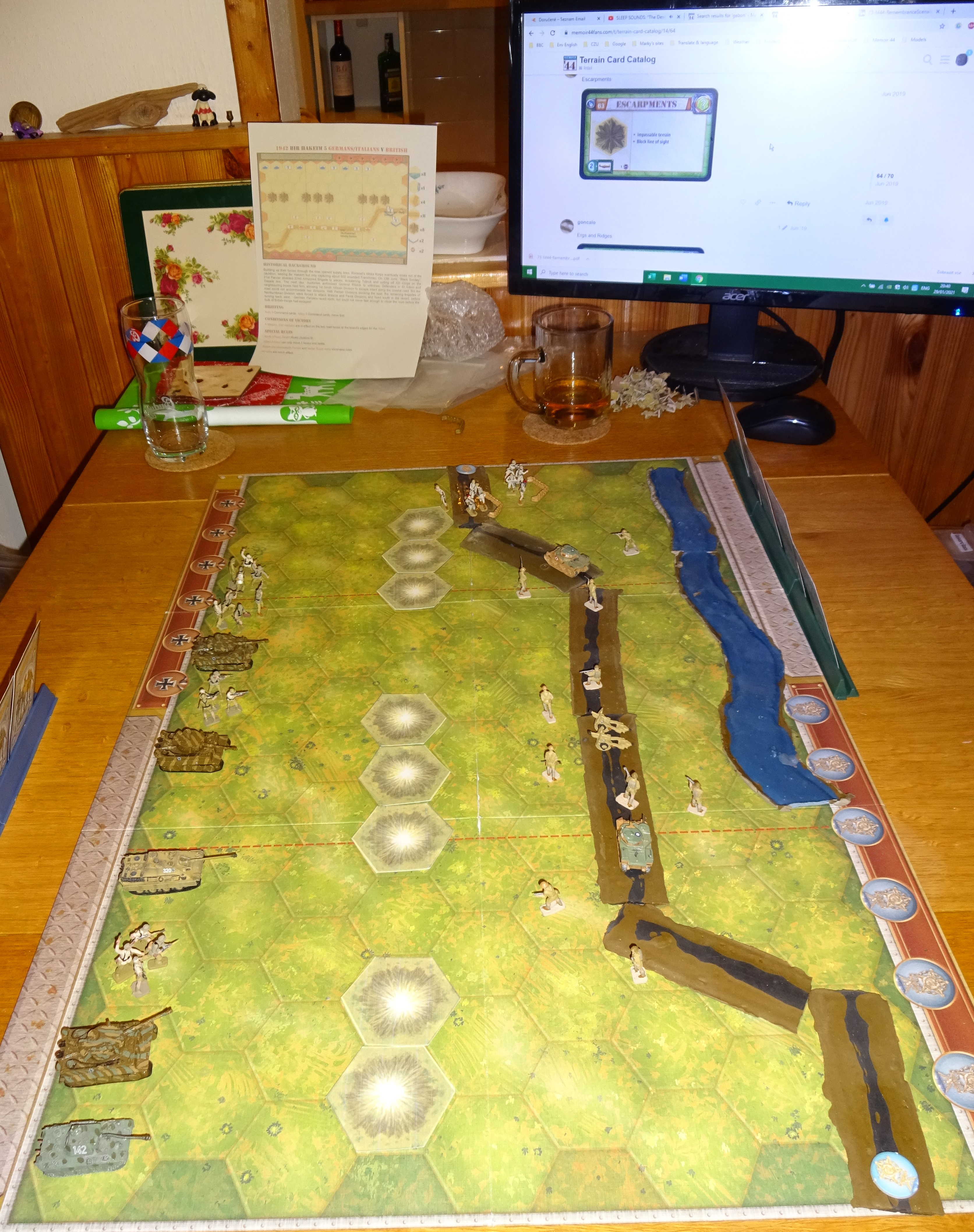 I played this one! German tank manouvre is very important and can be lethal against the british if they get bunched up against the coast line.

Great idea having road segments, I guess that speeds up the set up.

Indeed - nowhere to retreat, so flags are deadly!
And that is what beat me - my last (potentially winning) tank unit was just one square away from the exit (bottom right) but got hit by flags and grenades. Game over!

Yes, the road sections (and the sea, which is actually a river) do make set up much quicker, plus I only use one (large) tank/gun at the beginning, as well as only one infantry piece. As and when a unit is targeted it is ‘‘manned up’’ for action.