Historical background
A second German wave arrived on Crete in the afternoon. At 16:15, 2nd Fallschirmjäger Regiment airdropped over Rethymno airfield; but like others in Crete, they all landed scattered along the coast. Elements of the 3rd Battalion quickly managed to regroup and move toward Rethymno, where they ran into fierce resistance from the Australian battalions that had taken position on the hills south of the airfield; the town’s civilians and the Greek 4th and 5th Regiments just added to the invaders’ difficulties. Cut-off from the rest of Crete, outgunned and surrounded, the Australians went on to hold the German invaders off for 9 days before Lieutenant Colonel Ian Campbell, commander of the 2/1st Battalion, ordered his men to surrender. Even then, many men of 2/11th Battalion, instructed by Major Sandover to either surrender or evade capture, managed to make it to the hills, and, protected by local Cretans, eventually escaped to Egypt.

Report
20 minutes to set up and just under half an hour to play. No complex rules, but you have to keep an eye on who is in majority control of the extra medals for the towns and hill. The interesting aspect is that the German paras are scattered all over the board, so a bit tricky to coordinate units.
Set up: 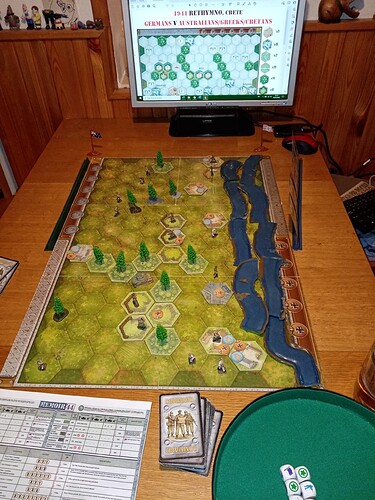 Basically all infantry, with just one tank unit. A very bloody battle (very good dice), with both sides losing many figures, but not necessarily whole units. Ultimately it was keeping control of Hill B that won it for the Allies (6:3), but it was tight. The German unit bottom left never entered the game, but all the others did and took casualties.
Finish: 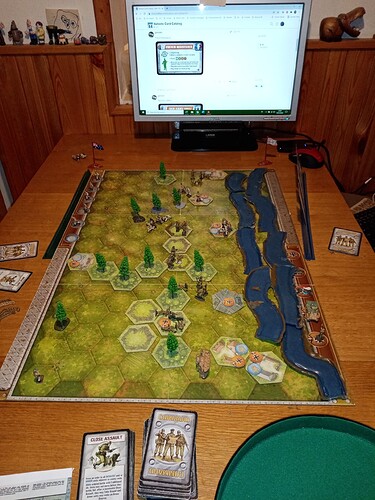 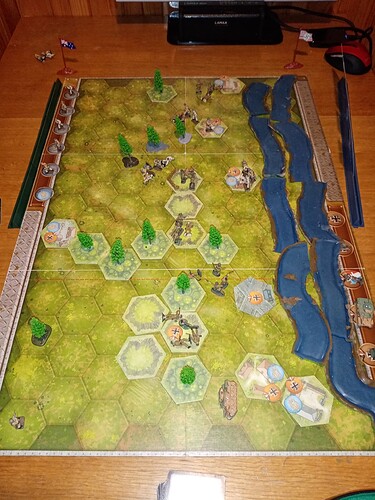 Another recommended game – quick and easy, suitable for solo.