Historical background
The German drop on Rethymno on the 20th of May wasn’t until 16:30. The defence of the area was left to Lt Colonel Ian Campbell who positioned his forces of two Australian Battalions on the hills overlooking the airfield and olive oil factory, with elements of the 4th and 5th Greek regiments sheltered in the olive grove in the centre, while the town itself was defended by the Cretan Gendarmerie under Major Tsiphakis.
The German forces set up positions around the airfield and olive oil factory and on the road east of the town and attacked and took Hill A. The allied forces regrouped and recaptured Hill A and by the 25th had captured the olive oil factory.
Realising that further attacks would result in heavy losses and their objectives of preventing the airfield and port being used by the Germans had been completed and with no hope of escape, Lt Colonel Ian Campbell surrender his forces on the 30th of May (evacuations had already started and would finish the next day)

Report
12 minutes to set up, 24 minutes to play!
No complex rules, relatively simple terrain.
Thanks to great cards for both sides, this was a really fast-moving, high-scoring game.
Set up: 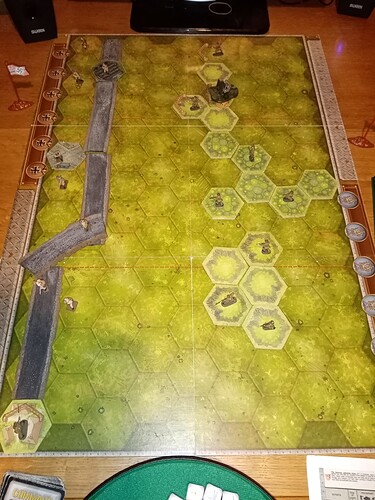 The Allies got off to a good start (0-2), but the Germans played Thier Finest Hour and took the town, artillery piece, and medal in one go (3-2). However, the Allies played a Counter-attack and retook the hill with the medal (2-3).
The Germans launched a big attack on their right and got it back to 4-4, before the Allies finally took the winning medal with a great dice throw (see second photo).
Finish: 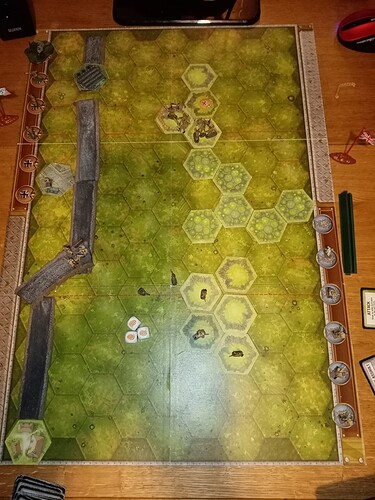 It was the great cards that made this a quick and exciting game, but I’m sure that even a longer version would be good to play.