Historical Background:
The first wave of gliders from Gruppe Mitte’s (Centre Group) 3rd Fallschirmjäger Regiment had a number of bold objectives: Hauptmann Altmann’s men were tasked with silencing a dangerous anti-aircraft battery in the Akrotiri peninsula, while the men of Oberleutnant Genz were to knock out another anti-aircraft battery and a wireless station south of Hania; concurrently, Oberst Heidrich’s Paratroopers would take Galatos and establish a defensive position on the hills surrounding the town. Although scattered during their airdrop, Altmann’s men eventually managed to capture their objective, only to find this battery to be a dummy! Meanwhile, two of Genz’s gliders released early over Hania while a third exploded in mid-air, when caught in ground fire; but the others successfully landed near their anti-aircraft objective, and Genz detachment put their MG34 machine guns to good use, quickly overrunning the outgunned battery’s defenders. They then attempted to reach the wireless station but were blocked by 1st Ranger Battalion and Bren gun carriers of Royal Welch Fusiliers. As for Heidrich’s paratroopers, they managed to set foot on some of the hills around Prison Valley, but Brigadier Puttick’s New Zealanders and light tanks counterattacked pushing them back into the valley.

Conditions of Victory:
6 Medals.
Hania, Galatos, Stalos and Platanias are Start Turn Temporary Medal Objectives worth 1 medal each for the Axis forces. The moment a unit vacates a town for any reason (movement, retreat or elimination), the medal is lost.
The Axis Medal in the Forest hex represents the Allied Wireless Station. It is a Turn Start Permanent Medal Objective for the Axis forces. The medal is gained and can no longer be lost, once the Axis forces manage to occupy this hex at the start of one of their turns.
Objective Medal on hex containing Allied artillery unit. Elimination of this unit is worth one additional medal for the Axis forces.
5 hill hexes (Pink, Ruin, Wheat, and Cemetery x2) form a Turn Start Temporary Majority Medal Objective worth 1 Medal for whoever controls the majority of these high ground hexes. If the majority is lost for any reason (movement, retreat or elimination), the medal is immediately lost.

Special Rules:
British Commonwealth Forces Command rules are in effect (Nations 5 - British Commonwealth Forces).
British Armour only has 2 figures and it only moves 2 hexes.
Place a badge on the 1 German engineer unit (Troops 4 - Combat Engineers).
All the other Axis infantry units are Para Special Forces (Troops 2 -Specialized Units).
When an Air Power card is played, the Axis player rolls 2 dice, the Allied player only 1 die.

Report
Another interesting scenario from the German invasion of Crete.
Slightly frustrating in that it took longer to set up than to play (20 minutes game time).
Despite the set up time, this is a good scenario for solo play because there are only a few Special Rules to key an eye on.
I’m not sure why the allied artillery gives an extra medal when eliminated - it seemed to add another advantage to the Axis who were always going to win anyway. There are six Axis medals on the board, half of which are unmanned by Allied forces.
Having said that, it was an interesting battle, with the Germans right flank almost being eliminated (1 figure left in each unit) before it snatched 2 of the 3 decisive medals in the winning Axis move. 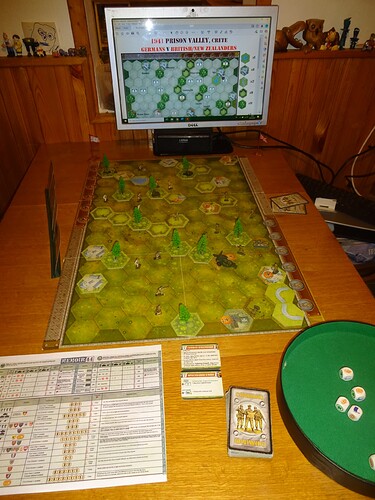 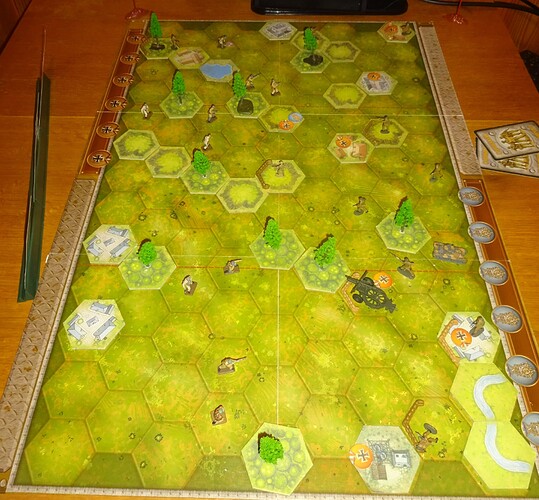 Very nice AAR. You should use Vassal to play

This looks like you’ve had fun. I like that big printout you have. I’ll have to have a look for it.

Incidentally, in the last couple of sessions I’ve come to a realization with the use of dice. The majority of situations call for just one, two or three dice, and occasionally four. In the base set there are 8 dice. If you organize four small dice trays, you can have one dice in one, three dice in one, and two dice in two trays. This means you don’t have to fumble the dice each time to count them out, you simply reach for the tray with the correct number. If you have to roll four, just roll both of the ‘two’ trays. I’ve found that by keeping to this system, the game seems to flow by much quicker.

If you are referring to the rules crib sheet in the first photo, it is here in Intel.

I like the dice idea - will give it a go.

Thanks very much! I love it.