Historical Background
By late morning on May 23rd, the Fallschirmjägers of Oberst Ramcke had set up a defensive position on the Platanias River bridge near the coast. Inland, Oberst Utz moved to take the village of Modi. Defended by New Zealanders, the village fell after a fierce fight. The Allied artillery, which had been shelling the Germans at Maleme airfield for days, was now outflanked and forced to fall back. In the early afternoon, Captain Baker and his men attempted to retake the bridge, but the Germans held and counterattacked. As for the Cretan Partisans and the 8th Greek Regiment that had moved forward from Agia Marine, they only proved to be a minor hindrance to the Germans and did not stop their advance.

Conditions of Victory
6 Medals.
The bridge is a Last to Occupy Medal Objective worth 1 medal. Unit occupying vacate it, and its player will continue to hold the medal, provided no enemy troop captures it. Modi is a Temporary Medal Objective worth 1 Medal. In addition, if an Axis unit manages to occupy Modi, the Allied artillery unit up in the hills immediately loses its sandbags for the rest of the battle.
Stalos, Agia Marina, and Platanias are Start Turn Temporary Medal Objectives worth 1 medal each for the Axis forces. If a unit vacates a town hex for any reason (movement, retreat or elimination), that medal is immediately lost.

Report
Set up 25 minutes, playing time 40 minutes.
What looked like a very evenly matched scenario turned into a comfortable Allied win (6:1), although the Allies did lose a lot of figures,
The Germans were seriously hampered by the river, even though it was fordable (must stop on entering, battle at -1). The artillery kept picking them off and/or pushing them back across the water, slowing down any German momentum.
The Allied units nearest the bridge moved in very quickly and soon wiped out the Germans there.
The Germans did come close to dominating the hilly ground, thanks to Finest Hour and Air Power (2 dice for the Axis). But ultimately the dice favoured the Kiwis.

An interesting question – which way do you retreat in such a scenario? The confused fighting on the hills at the end saw units outflanking each other and made me think twice about which way to run!

Despite its relatively long set up, I would recommend this scenario – I played solo, and will definitely give it a go against someone else. 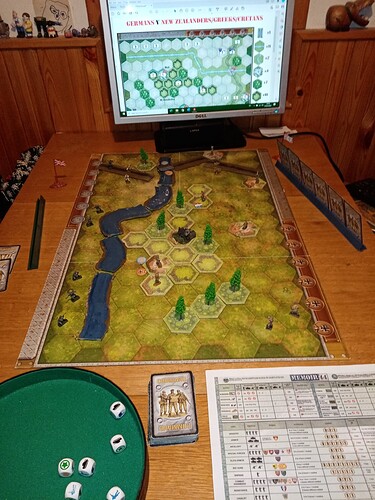 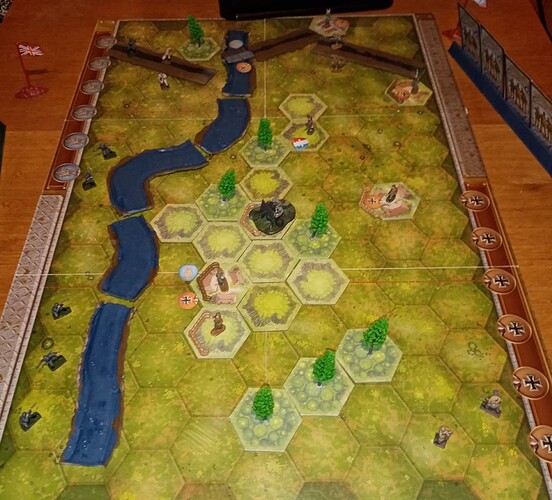 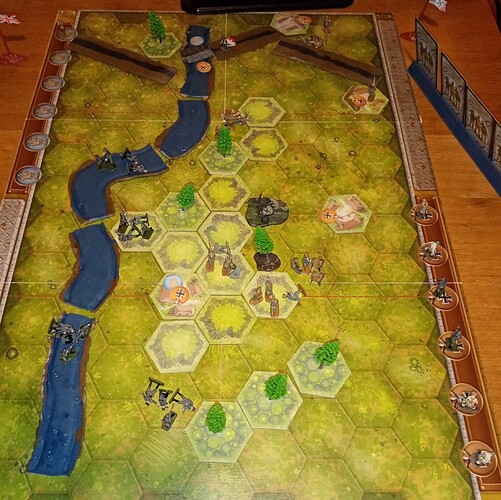