1941 Heraklion 4 - The Streets of; Germans V British and Greeks

Historical Background
The target of the 3. battalion of Major Schulz, 1. Fallschirmjäger Regiment, was the city of Heraklion, surrounded by old venetian walls. During the night of 20th to 21st May 1941 the Battalion slipped in two battlegroups, attacked the western gate and repelled the Hellenic defenders towards the port. But in the morning, a fierce British counter-attack forced the German paratroopers, almost out of ammunition, to withdraw out of the city. The capture of Heraklion had failed once again.

Conditions of Victory
6 medals. The Allied player has a “Sudden Death” as soon as an Axis unit capture the port.

Special Rules
Axis units are paratroopers (Troops 2).
BCF Command rules (Nation 5) for the British troops only.
Blitz rules (Action 15).
Night Attack rules (Action 19).
Special Weapon Assets and Mortar rules for the unit equipped with the mortar (SWA 1 & 3).
Escarpments and Fortresses symbolize the venetian walls and redoubt which surrounded the city. Both are Impassable (from outside for the fortresses only).
Fortresses rules (Terrain 24).
Air Power card is not allowed for the Allied player. Discard it and take another.
Barrage card is not allowed for the Axis player. Discard it and take another.

Set up 22 minutes, playing time 20 + 15!
I had been looking forward to doing this jdrommel scenario – interesting layout and a variety of rules to take into account. In the end I found it was not suitable for solo play, so looking forward to trying it again… 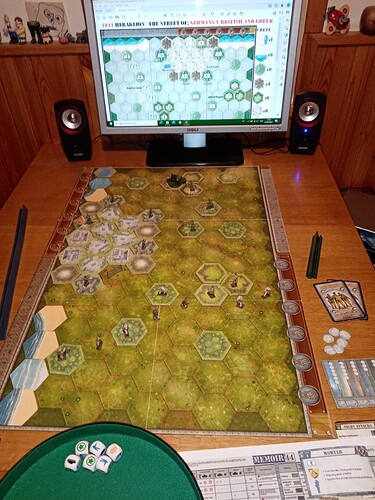 Firstly, Night Attack rules had limited impact. Because the Germans are all special units they could move two and fight, so were immediately in close assault. The Allies threw no stars for two turns, then threw 3 and 2, so suddenly it was almost full daylight, but not enough to allow the Allies to use Barrage. This was significant because I was playing solo so the Allies only had two cards at a time to choose from.
The Germans had excellent cards, enabling all their units to mount a concerted attack, leading them straight into the town and close to the port (the Sudden Death move!). Again, the solo aspect meant the Allies had nothing to use to get their troops mobilised to defend the town.
And so, at just 3-2 (with a target of 6 medals) the Axis took the port and the game was over after 20 minutes!
So I sat and thought for a minute, then decided to hell with the rules and let’s carry on! The Germans were going to win anyway, but this was premature.
The Greeks then retook the port (making it 3-3) and the Allies even went ahead, but the Germans had so many forces that they took more Allied units and recaptured the port. 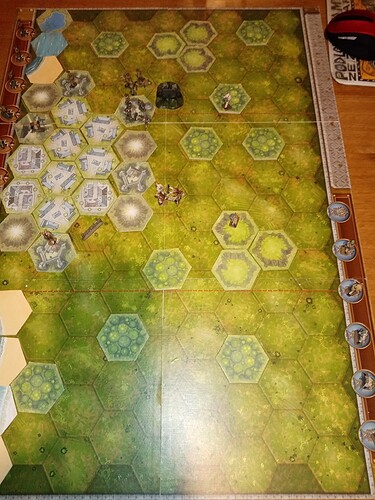 Looking back, this scenario is not suitable for solo play because the Allies really need a full set of cards to choose from to counter such a large German force. There was no way of getting the British 14th Infantry Brigade into the town in time (as happened in reality, repelling the Germans)

So, looking forward to playing it against an opponent…