One of the more complex Crete scenarios

Historical Background
The target of 1. Fallschirmjäger Regiment, reinforced by 2. Battalion 2.Fs Rgt, was to capture the city of Heraklion and its airfield. 3. Battalion and 2/2.Fs Rgt were dropped west of Heraklion, while 1. Battalion near the airfield and 2. Battalion in the Gournes area, some kilometres to the east. The dropping of the regiment was in the afternoon, with the second wave in scattered and the German paratroopers were at once under the fire of the Scottish Black Watch (14th Infantry Brigade), 2/4 Australian Battalion, and two battalions of the Hellenic army. In east, 1. Battalion suffered heavy losses (two companies dropped on the airfield were fully destroyed) before being reinforced by 2. Battalion coming from Gournes. In the mountains, some Cretan partisans were fighting against isolated paratroopers. At the end of the day, the target of the regiment was not acquired, Heraklion airfield stayed inaccessible.

Conditions of Victory
6 medals. Heraklion airfield is a temporary medal objective for the Axis.

Special Rules
Axis units are paratroopers (Troops 2).
BCF Command rules (Nation 5) for the British troops only.
French Resistance rules (Nation 1) for the two partisan units.
Fordable Streams rules (Terrain 61) for the Kairatos river.
Blitz rules (Action 15).
Paradrop rules (Action 20). During the 1st Axis turn, three infantry units are dropped on the battle star hexagon in the left section and four infantry units are dropped on the battle star hexagon in the central section. If a unit falls in a hexagon occupied by a friendly unit, place this unit in an free adjacent hex.
Kampfgruppe : During the war, the German officers had the ability to mix some different units and isolated soldiers to form a “Kampfgruppe”. In this scenario, once only, two Axis units which suffered some losses could mix and form a single unit if the number of figures doesn’t exceed four (i e : 1+1, 2+1, 2+2, 3+1). The disbanding of one unit doesn’t count for an Allied medal.
Axis reinforcement: From the second turn, the Axis player can take in three infantry units on the hexagon “entrée” near Gournes by the activation of an appropriate command card. It symbolizes the arrival on foot of the battalion “Walther”, landed far away in the east.
Air Power card is not allowed for the Allied player. Discard it and take another.
Barrage card is not allowed for the Axis player. Discard it and take another.

Relatively complex terrain, hence the long set up, and some interesting rules, but well worth the effort. I played it solo and enjoyed it, but really want to do it again against someone! 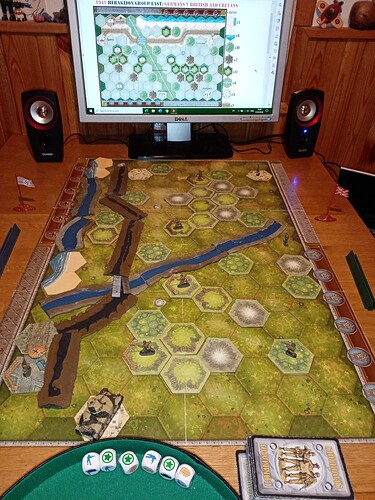 The German airdrop was of mixed success. The red zone saw 1 unit go off board (so out of the game) and 1 into the sea, the other 2 landing right next to the Allied positions. In the blue zone all 3 land next to the enemy. This was what happened in reality, leading to immediate heavy losses. This game started in the same way – good Allied cards and dice saw all German units reduced in number and 1 lost. 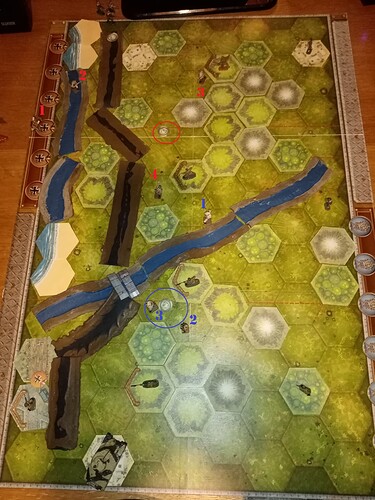 Even with reinforcements coming in, the Germans were in trouble all the time. Their Finest Hour was of limited success and the were soon 1-3 down. They eliminated both Greek partisan units very easily, but the decisive element was the Allied armour; as soon as the cards allowed it, it went into action with devastating effect.

The Germans were eliminated in all but their own left flank, never getting anywhere near their objective – the airfield.
The Allied tank took out 4 enemy units, including the winning medal.

One curious thing is how, at the end, both sides had 3 completely unscathed units left, with the Allies (in green) also having one reduced unit. This seems to show how important it is to take out weakened units when you can, rather than spreading your attack onto too many targets. Indeed, the tank unit chased down reduced German units, including the final kill. 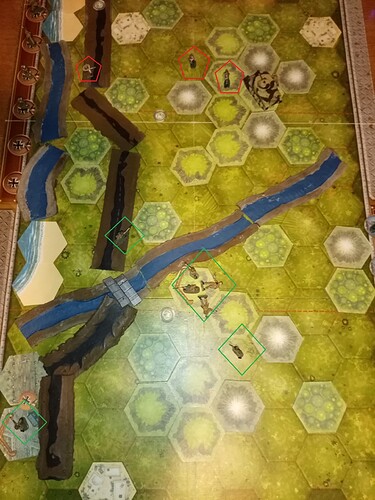 A great scenario - well worth the effort.