We wanted a quick and easy game to set up and play.
But it ended up a bit confusing and difficult to finish off…

Historical Background
It wasn’t until 17:30 on 20th May 1941 that the German assault at Heraklion began. As with the other drops earlier that day, the German objective was the airfield and the high ground overlooking it. Against this German attack the allied force consisted of a mixture of British (Yorks and Lancs, Leicesters, and Black Watch) and Greek troops evacuated from the mainland, along with members of the local Cretan Gendarmerie defending the town.

The fighting resulted in heavy German losses and the town and port facilities remained in allied hands. The fighting ended with the allied force evacuating by sea on the night of the 28th to 29th of May

Report
10 minutes to set up, 45 minutes to play.
Nice easy set up - simple terrain, very few rules.
Basically an infantry fight, with one artillery unit (which proved decisive).
One strange thing is making the Black Watch into special forces units - they never were, but maybe there was a good reason for designating them as such (the description doesn’t say why). We used them as normal infantry.

Set up:
I have just noticed that we made a mistake in the set up - the town (circled) should have been a British unit! This makes a difference to how the game played out… 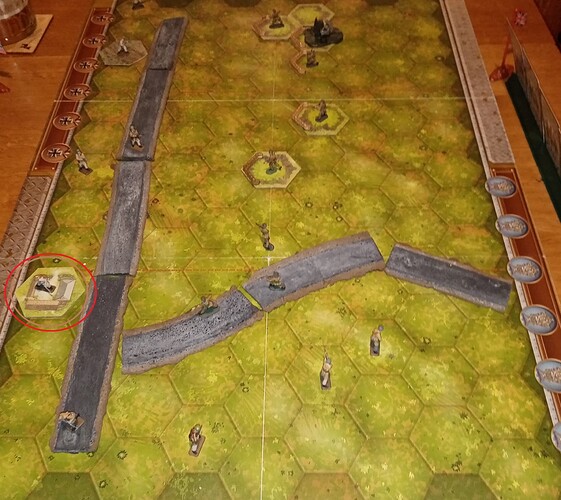 The problem with this scenario is that the medal count is 6. Yet there are only 8 Axis units and 9 Allied. So you have to pretty much wipe out your opponent to win.
There are no extra medals - perhaps there should be for the airfield and the town?
So what happened is that the score got to 5-5 and the remaining, weakened, British units withdrew to the hills at the far end of the board (their right); the Axis had to go after them (also with weakened units) with no useful cards. The last stage of the game was a strange 10 minutes of cat and mouse, with the Allies finally getting the sixth medal (eliminating a German unit at the airfield - circled below): 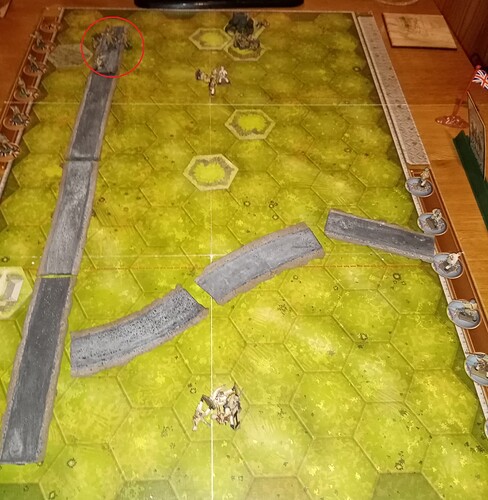 Ultimately a bit disappointing, but I cannot say exactly why.
5 medals only? Victory medals for the town and airfield?