Historical Background
Hill 134, “East Hill” for the British, was captured during the night 20th to 21st May by a Fallschirmjäger platoon of Lieutenant Earl von Blücher, descendant of the famous Prussian general in Napoleonic times. East Hill overlooked Heraklion airfield so the Scottish soldiers of the Black Watch Regiment wanted to recapture this strategic position. On the morning of 21st May, they attacked, supported by artillery fire and a pair of tanks. The German paratroopers stayed in their defensive positions until the afternoon when, out of ammunition, they were overwhelmed by the assault of the Black Watch. Only some wounded were taken prisoner, all the others were killed in action, including the platoon leader. Three brothers von Blücher who served in the German Fallschirmjägers were all killed in the battle of Crete.

Report
Set up time 16 minutes, playing time 33 minutes.
Surprisingly quick to set up, despite the amount of terrain:

Initially there was not much action because the two sides are relatively far apart. The Allies had the cards for a concerted attack on their right onto the hills, but good dice from the Germans pushed them back and the cards dried up.
The German right attacked towards the airfield, but also made slow progress. Then they played Airpower (for which the Germans get two dice in Crete) and Firefight cards which caused heavy Allied casualties, but only not enough to take many units.
With the score at 3-3 the Allies finally managed to get cards for the centre and use their artillery and armour to go 3-5 ahead.
The Germans had a great chance to get at least two more medals, or even win, when they played Assault in the centre against three weakened Allied units… 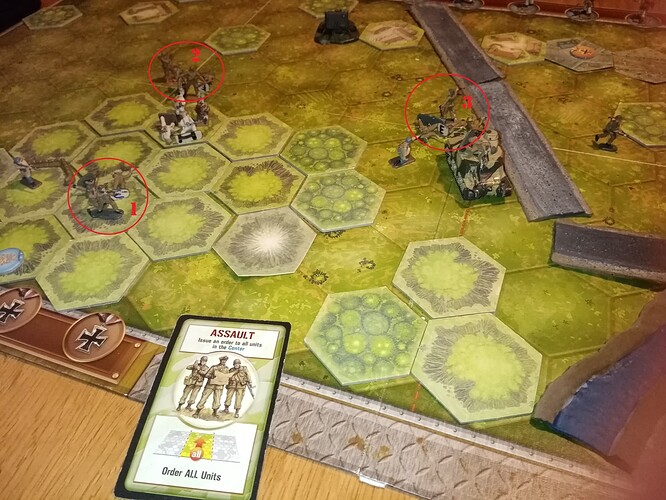 But the dice were terrible; against units 1 and 2 (both just 2 figures left) they threw 1 hit ,1 flag, 1 star (both times!) and against unit 3 (with just ONE figure left!) they threw 2 flags and a star! So all three Allied units survived.
This failed assault left them completely exposed, and the Allies immediately got the winning medal. 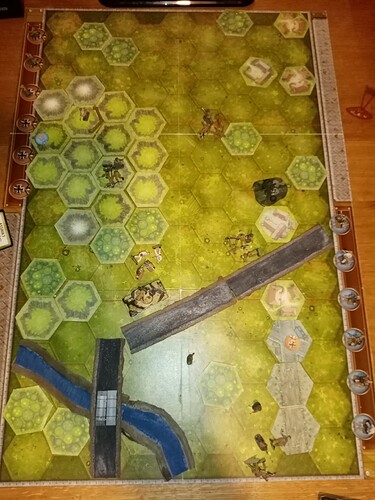 Another great jdromel scenario from Crete, with plenty to think about: Stay in your dug-in positions or attack the Allies? Wait for the Germans to attack or go and get them?!