A lot of people seem to augment their collection by adding 1/72 miniatures from various brands. Some, for example, have used distinct infantry for Italy rather than using base-set Germans, or they may have opted to use a different set of miniatures to denote combat engineers, different weather uniforms, French Resistance, US marines or whatever.
In this thread I propose we present side-by-side comparison of official miniatures with unofficial miniatures from different brands. Also, I think it is worthwhile stating whether the miniatures are suitable for the game with particular attention to their bases and whether they can stand and remain upright during gameplay.
Before we start, I note that there is already quite a lot of variation in scale between the five basic factions- Japanese are very small, and Germans are stooped so appear small compared with others, etc.
I attach the various official infantrymen from the base game and expansions, including those in the equipment pack, courtesy of plasticsoldierreview.com

I mount mine on a small copper coin for stability, in particular I use a South African one Cent Coin.
They are no longer minted but I managed to collect a few hundred of them before they went out of circulation. It formas a stable base and gives the figure more heft.

I am on the lookout for WW2 South African infantry for MM44 desert scenarios.
The only ones I know of are from Strelets, but I have yet to get hold of any:
http://plasticsoldierreview.com/Review.aspx?id=2219

Excellent idea for a thread.
I recommend Plastic Soldier Review to anyone thinking of buying any of the dozens of possibilities for adding 1/72 figures to their MM44 collection.
Firstly, they show images of all the figures, so you know how many are in a prone position - i.e. ones that are not normally suitable for putting on MM44 hexes (I have a box full of unused prone figures - which my nephews love to raid!)
Secondly, if you are interested in how historically accurate the figures are then you get the answer from this website.

Actually, prior to the Equipment Pack I was using the Prone figures to Represent Snipers.

Never thought of that, pretty smart!

I think I might also have used some prone figures for that!
I never got the Equipment Pack. Instead I use parts of the Zveda Soviet snipers and German snipers kits; the latter has some nice wall sections to put them behind.

British forces
Using Plastic Soldier reviews (marks out of 10), here are the highest-rated British figures (which I own).
Infantry – I use a mix of these two:
9.4 Revell Set 02523 British Infantry; really good, but some are a bit unstable on their bases.
9.0 Esci Set 200 British Soldiers; good, but 13 (out of 50) of them are not really usable on MM44 hexes (see pictures on the weblink).
Commandos:
9.2 Caesar Set H073 WWII British Commandos; BUT only 27 figures (MM44 has 40 per side).
I supplement these with some poorer (8.0) but classic old Airfix figures.
Paras:
9.0 Revell Set 02509 British Paratroopers; again, 13 (out of 50) of them are not really usable. I supplement them with some decent (8.4) Esci figures.
Desert Rats:
9.4 Esci Set 207 British 8th Army Soldiers; excellent - only 9 out of 50 are prone position.
9.2 Revell Set 02617 British 8th Army; some great poses (including a surrendering German, bagpipes, and Monty!), but only 30 or so useable ones.

Hope that is all useful - and what you had in mind Ben_Phillis.

UPDATE:
Do not buy Revell 02597 British Infantry for MM44 use! Despite some great poses (rated 8.6/10 overall), the bases are far too slim and they fall over easily.

Those snipers are beautiful. I have also been using prone minis as snipers and I just painted the miniatures in black matte so they could be used by any of the factions. I think I might have to look into upgrading!

This is fantastic, thank you very much. This is exactly what I had in mind. I have found it can be a relatively cheap little project to slowly supplement the game and to create a bit of visual interest. I dislike painting miniatures, so my plan is to basically give them a single coat of paint in something approximate to faction colours.
I didn’t realize I needed a Monty figure until now!

Unfortunately, Zvezda have stopped producing 1/72 figures (a real shame because the quality is excellent). There are still some kits around, but you might have to hunt those snipers down!

If you dislike painting then the Revell figures might be best because their basic brown colour is acceptable for gaming.
British uniforms tended to be very similar, so whether its commandos, paras, or infantry then khaki will do the job (Humbrol 26 or Tamiya XF49). I sure even the Desert Rats would tolerate it! (Brown yellow Humbrol 94 is the main colour I use.)

Using Plastic Soldier reviews (marks out of 10), here are the highest-rated American figures (which I own/know of).

Rangers: If you want to do your D-Day/Saving Private Ryan scenarios. One of the few (if only) sets to get 10/10 is Pegasus Set 7351 US Rangers D-Day. But, it is mostly for diorama modelling, not for wargaming. Much more useful is Mars Set 72126 US Rangers D-Day (8.2).

Using Plastic Soldier reviews (marks out of 10), here are the highest-rated Japanese figures (there aren’t many sets, but there are some very good ones).

9.8 Matchbox Set P5007 Japanese Infantry. Voted one of the best World War II sets ever made, but 10 of the 45 figures are not suitable for MM44. Hard to find the originals (I was lucky!), with Revell now selling them.

9.4 Revell Set 02507 Japanese Infantry. As well as re-boxing the Matchbox set (above), Revell also have their decent own set. With only 5 prone figures out of the set of 50, they are a good one for wargaming.

Thank you very much for all this excellent stuff. This is truly an excellent resource. I’m really sorry I’ve not been able to respond earlier, I’ve just been so busy recently.
Anyway. I have a set of Airfix US paratroopers, which I bought an as an experiment and because they were very cheap (even here!).
Airfix US paratroopers
Its a disappointing set, with a lot of flaws. The one big benefit is that several of the poses are freestanding without the need to be separately based. The quality of the minis was pretty poor, and I gather this is an old series that has been around for a long time, and perhaps the quality of the sculpts is not great. I had to spend a lot of time removing excess plastic from the minis with a craft knife, and the result is still not great.

My personal preference is for a large number of very generic poses in a set, with a belief that only really the specialists should be distinguishable from the rest. With that in mind, I’d say 16 of these minis fits that particular category. The prone infantryman pictured in the middle is nice to use as a sniper, I glued him to a cheap poker chip and I guess it looks ok. The bottom row are pretty much useless to me, and I personally dislike the crouching guys, but at least they will stand up. I guess my summary is to say pick up if cheap, but you can likely find better elsewhere.

It can be really hit or miss with some of the sets made by Airfix and other well-known brands. You can be lucky and get a good casting, or pick up one with lots of annoying flash (like you unfortunately did, did by the sounds of it).
I have a good set of Revell paras and have literally just finished painting my Imex Easy Company set (the paint on the bases is still wet in the photo!). Together they make a useable number of squads (i.e. 4 figures) for the game. 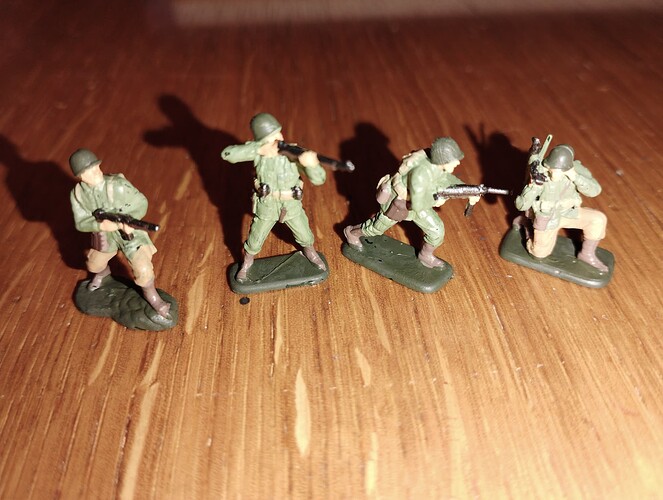 That’s interesting to know, thank you. I think the Airfix set is from an old design which dates back to the 1970s, so perhaps the more recent technology allows for a more consistent result. I’ll persevere.
Those painted models are great. What do you use as a base coat? Is that white?

I actually don’t do a base coat as such - I’m not that serious a painter.
Usually I paint the whole figure whatever the main uniform colour is going to be - in this case a light green. It does mean that, with these paras, the figures with tan trousers do actually have an undercoat of green.
The only two things I always do now are to wash the figures beforehand and varnish them afterwards - using them as gaming pieces takes its toll and in the past I have had paint flake off (especially on arms, legs, and weapons).

Going back to the luck of the draw with moulds and reissuing of sets, I just remembered a few notes I wrote about Airfix Gurkhas on another thread:

That’s an awesome thread. I don’t know how I managed to miss it before. Very interesting stuff.

I’ve only really dabbled in painting, and all of the paints that are easily available to me are labelled in Japanese, so I have made very slow progress. For the varnish, does it leave them feeling slightly sticky? When I painted my sandbags and wire I used what I thought was a varnish coating. Its clear, but it leaves them feeling a little sticky to the touch and they sometimes stick together in the box.